Some Facts About the 2015 Convention 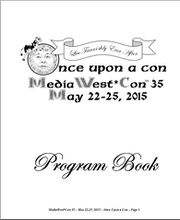 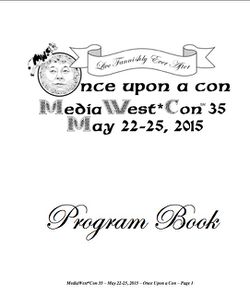 cover of the 2015 program book

"In addition to the presentation of the Fan Q’s, the Sunday panel will also have a discussion on whether or not the Fan Q’s should be expanded. If you know of anyone interested in this discussion, please let them know so they can also attend." [1]

Gordon performed his play "Once Upon A Con" Saturday night. Photos are embedded here.

photos from the skit

There was no Fan Fund attendee this year.

By popular vote, from the post-con report:

There were no awards as there were too few entries submitted.

The index is here. The Index (note: there are some changes between the index and the final panel schedule. See the program book scans in Program Book Gallery for what was the final line-up.

I still find it hard to wrap my mind around the MediaWest*Con 34 Art auction. The single bid of $500.00, for my silk Marvin Martian shirt took my breath away and buckled my kneess! I believe this convention has some of the most generous and compassionate members of any Con. I was astounded minutes after the bid by the passed hat that held more money than the shirt bid! I’m still questioning the amount I was given as payment for art sold! I must thank you, Lori and Gordon for keeping MW*C going over 3 decades. (I know because I’ve never missed one yet.) Thank you to Paula for keeping the bidding succinct, Jesse for the really cool “hat trick” and Karen for reminding me why I had to take math over in summer school. Hugs And Kisses to Jim, my art runner partner and my husband /partner (They both kept me standing late Sunday). To all of you in the art audience, auctioneers, runners, and those of you who stopped me in dealers or halls on your way out Monday with more folded green stuff.

There are Angels around me
That actually make me blink
as I stand upon the brink
Back tears of total astonishment
Of subtle darkness turned to light
That I might not have known
If not for Angels loose among
The Con I call my own. - Brenda & Jim Gasahl [2]