This page is about the TV series. For the zine, see Elementary (Sherlock Holmes zine).

Fan Reactions to the Show

Elementary faced severe scrutiny from the moment CBS first announced in September 2011 [1] that they would be developing a TV show with "a modern take" on Sherlock Holmes. Most of the criticism came from fans of the 2010 TV series Sherlock (BBC), which is also a modern day version of Sherlock Holmes.

Comments on an ohnotheydidnt post about the announcement were nearly all immediate dismissals of the entire concept, such as "very original idea", "i'll pass. i love the bbc series." Fans often expressed sentiments such as, "American versions of British shows will never be as good." [2] (Although one prescient ONTDer did guess "I wonder if it will be set in New York or something..." [3])

Sherlock co-creator Steven Moffatt and executive producer Sue Vertue fanned the flames of fannish criticism, stating in interviews and on Twitter that they felt that CBS was merely copying their version of Sherlock, after CBS had previously approached them to remake Sherlock and been rebuffed.[4]

The casting of Jonny Lee Miller was revealed in February 2012. Most American fans either went "Who?" or "Oh, that guy who was in the National Theatre Live production of Frankenstein, alternating roles with Benedict Cumberbatch."

In August 2012, Benedict Cumberbatch, who had remained mostly neutral about the idea of "Elementary," was quoted as saying he was "a bit cynical" about the idea and implying that Miller had only taken the role for the paycheck. This was widely reblogged on Tumblr; however, the next day Cumberbatch stated that he was "upset" at being misquoted, saying: "I know for a fact his motivations were to do with the quality of the script and the challenges of this exceptional role. .... Over 70 actors have played this exceptional character before us. To say that there can be only one Holmes would be ludicrous. .... As a genuine Sherlock Holmes fan I am greatly looking forward to his series." [5] 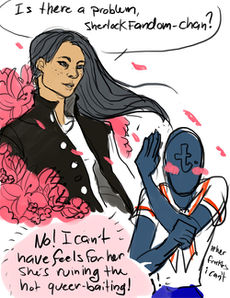 The casting of Lucy Liu as Watson was revealed in February 2012 [6] More details about her character's backstory quickly followed, specifically that she would be Holmes' "sober companion" and that she would be "a former surgeon who lost her license after a patient died".[7]

Many different people had a number of different opinions.

Some fans declared that to cast a woman as Watson was homophobic, arguing that the only reason anyone would think of casting a woman as Watson would be in an attempt to erase any possible homosexual subtext, or else to create a canon (but het) Holmes/Watson pairing. One fan wondered, "Is this a backhanded plot to make Holmes/Watson canon but not scandalous because Watson's a woman and therefore it's a-o-heterosexual-kay? No me gusta, CBS".[8] Other fans (including many Sherlock fans) responded to this by arguing that the BBC's Sherlock, with its ever-present "we're not gay" jokes, was not exactly a high point for queer representation on television either.[9] Still other fans did not think the casting was homophobic, but feared that a female Watson meant that Holmes and Watson would be locked into a "will they or won't they" quasi-romantic relationship.

Some fans felt that even without a romantic relationship, male Sherlock and a female Watson would inevitably be locked into established sexist roles, especially since Lucy Liu's Watson, as a "sober companion," seemed set up to be Sherlock's caretaker. Digitalmeowmix stated "....I'm really worried she will be characterized as nothing but a nagging babysitter/maid for Holmes and and she will end up having no story of her own and just get saved a lot and secretly crush on him." [10] Some hoped optimistically for a solid male-female platonic friendship, rare between men and women in pop culture.[11]

Others disliked what they saw as a softening of the character, arguing that Watson's military background was a key part of the classic character, and criticising one of the early trailers for including a moment where Liu's Watson flinched from seeing the body of a murder victim.[12] In general, these concerns could be summed by by the comment of a fan called finalproblem, who stated: "....none of my concern is actually about Watson as a woman—it's all about how women tend to be written for television." [13]

Some Sherlock fans resorted to sexism/misogyny, racism, and general vitriol at the mere existence of the show. The term "Pressed Sherlock Fan" emerged to refer specifically to Sherlock fans who were constantly posting hate about Elementary. For documentation and responses, see OnlyForThePressed, Archived version, Elementasquee, WTFSherlock, Archived version.

Life in the Elementary Tag (gif by magicfingers)

Supporters of the show were also around, but were initially mostly drowned out by the hatred. However, as more information began to be released in January 2012, Elementary gained more vocal supporters. A small fandom emerged on LiveJournal and Tumblr. The LiveJournal community Elementary CBS, Archived version was created March 13. The livejournal-based kink meme was created in May. As of September 3 it was not very active, with only 25 members; however, digital versions of the show were just beginning to leak onto the Internet. There were 21 "Elementary" stories on the AO3, mostly Joan Watson-focused; many were based on speculation or what the authors hoped for from a female Watson.

On Tumblr, the hate for the show was so overwhelming on the Elementary tag that fans sought refuge in the Elementasquee tag instead, near the end of April.[14]

As soon as fans had safe spaces to interact, fandom and enthusiasm began to grow. Images and gifsets were put up on Tumblr more often, fanart happened, Lucy Liu was proclaimed Goddess of All, Jonny Lee Miller and Benedict Cumberbatch's scarves were proclaimed to be in a relationship, and fans began to speak up more forcefully and more often against the sexist, racist vitriol against the show.

A major shift happened the first day of San Diego Comic Con, when the pilot episode premiered and a Q/A panel was held for the show. For the first time ever, Tumblr's Elementary tag was actually more positive than negative. Squee increased among fans because, as one fan put it:

"the reactions of literally everyone who’s actually seen the pilot have been somewhere between, “A formulaic but generally solid procedural-ish show, with likeable performances and chemistry between the leads,” and, “ALDS;KF;LKDSFKL;J SO GOOD?????”."[15]

The fandom name Elementapeeps—sometimes abbreviated as "peeps"—quickly caught on in the growing Tumblr fandom, and became a popular tag elementapeeps, Archived version for posts pertaining specifically to fans themselves, like meetups and callouts (responding to problems in the fandom.)[16]

Reactions to the First Season

Relationship between Joan and Sherlock

Some analysis/link round-up of reactions to the relationship between the two leads on the show and in fan works; would be good to include arguments about whether slashing the characters weakens Joan's position.

Elementary was widely praised for its representation of marginalized groups during its first season. Beyond Lucy Liu's race- and gender-bending casting as Watson,[17] fans also praised the show's racially diverse casting of secondary characters and extras.[18] The casting of transgender actress Candis Cayne as a transgender Mrs. Hudson in particular drew praise for increasing visibility while avoiding misgendering or stereotyping of transgender people.[19][20] However, other fans felt that the show didn't go far enough in drawing attention to Sherlock's privilege and biases as a wealthy white male.[21]

During the first season, Irene Adler (played by Natalie Dormer) is first introduced as a fridged woman, Sherlock's love who was murdered horribly by a master criminal named M, sparking his descent into addiction. However, in the last two episodes, Joan and Sherlock are directed to an abandoned house, where they discover that Irene is still alive, but has been kept in captivity and traumatized by Moriarty. Sherlock removes himself from the case, leaving Joan in charge of investigating Moriarty so that he can take care of Irene. There are elements of Irene's appearance that do not add up, however, and she soon reveals herself to be Moriarty herself, again sending Sherlock into a tailspin. In the end, Joan is the one who reads Irene/Moriarty correctly, successfully setting a trap for her.

Reaction to the twist of Moriarty's identity was mixed but overall positive. 3 Chic Geeks argued in Taming the Woman: Irene Adler and the Male Gaze, Archived version that Irene on Elementary was the strongest of the recent interpretations of Irene Adler, but ultimately still undercut her by showing her defeated by love rather than truly a victor as she was in the original canon; but in the comments, Matthew Sycantha argues, Archived version that that defeat is less problematic than her defeat in other incarnations because both she and Sherlock are defeated by their love for each other, and it is Joan who is truly the victor.

Reactions to the Second Season 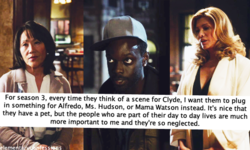 "For season 3, every time they think of a scene for Clyde, I want them to plug in something for Alfredo, Ms. Hudson, or Mama Watson instead. It’s nice that they have a pet, but the people who are part of their day to day lives are much more important to me and they’re so neglected."

Many fans thought the show took a step back during the second season, losing sight of what had made it so successful during season one. The largest contingent felt that the show had given too much of its focus to Sherlock's characterization, to the detriment of all the other characters and its effectiveness as an adaptation of the Sherlock Holmes stories.

I’m kinda tired of all the interesting, layered and—most importantly—canon characters being introduced as a part of Sherlock’s distant lonely past when, in the stories, they are a part of Sherlock and Watson’s life as partners and friends. . . The worst part is that Watson’s canon colleagues and friends were also eliminated from the show. . . I don’t know, I think this it’s so unfair to her character and I don’t think it’s a very good (or even smart) thing from an adaptation to do.[22] -yeahbeeswax after ep. 2x16 "The One Percent Solution."

This isn’t the Joan Watson show

This isn’t the Sherlock holmes show

The whole point going into all of this is that they are a partnership.

Their viewpoints, experiences, decisions, and relationships to other characters should have equal importance in the story. . . [but in season 2] whenever they chose to give joan a plot line in an episode, it’s always sidelined to whatever sherlock is doing even when her plot line is more dynamic and interesting.[23] -bulletproofbell during the hiatus between seasons 2 & 3. 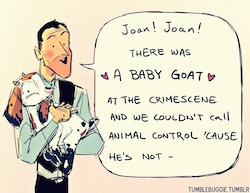 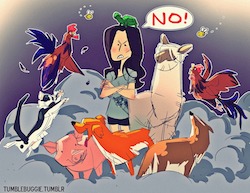 "I'M NOT FEEDING THEM!" by tumblebuggie