Guardians of the Galaxy

The team's first appearance was in Marvel Super-Heroes #18 (Jan. 1969) by Arnold Drake and Gene Colan. The Guardians are active in the 31st century in an alternative timeline of the Marvel Universe Earth-691. The team consisted first of Major Vance Astro, Martinex, Captain Charlie-27, and Yondu Udonta. They were later joined by Starhawk and Nicholette "Nikki" Gold. When they traveled back in time to the 20th Century Earth, they were helped by Captain America and The Thing. Much later, the team was joined by the Inhuman Talon, Replica the Skrull, and Rita DeMara.

The second team's first appearance (and is considered the modern version) was in Guardians of the Galaxy (vol. 2) #1 (May 2008) by Dan Abnett and Andy Lanning. This team consisted of Star-Lord, Adam Warlock, Drax the Destroyer, Gamora, Phyla-Vell, Rocket Raccoon, and Groot. Mantas was a supporting character and Nova was a common ally.

A film version of the team based on the second team in the comics is part of the Marvel Cinematic Universe, taking place after the events in The Avengers (2012). The movie (titled Guardians of the Galaxy) was released on 1 August 2014. The team consisted of Chris Pratt as Peter Quill, Dave Bautista as Drax, Zoe Saldana as Gamora, Bradley Cooper as the voice of Rocket, and Vin Diesel as the voice of Groot. Nebula, Thanos, Ronan the Accuser, Yondu Udonta, Korath the Pursuer, The Collector, and Nova Prime were supporting characters. A sequel, Guardians of the Galaxy Vol. 2, was released in 2017. Nebula and Yondu Udonta returned and Mantis joined the main cast. Groot is Baby Groot, having begun to regrow at the end of the first film. The film follows Quill meeting his father and learning about his mysterious alien parentage and explores his relationship with his father figure, Yondu.

The team, now including Peter Quill, Gamora, Rocket, a teenage Groot, Drax, and Mantis, appeared in Avengers: Infinity War, meeting Thor and then teaming up with other characters from the Marvel Cinematic Universe. Gamora had a prominent role in the film due to her having been adopted by Thanos and trained to be his personal assassin. 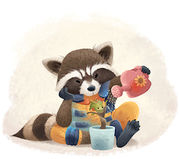 Rocket watering baby!Groot by Miru. Posted the day after the movie release; this piece had over 70,000 notes by the beginning of September.

The comic-specific Guardians of the Galaxy fandom is very small.[1] But piggybacking on the popularity of the MCU as a whole, the movie fandom began growing even before the movie was released.[2] Immediately after the movie was released, the fandom exploded on tumblr, fanart and gifsets acquiring tens of thousands of notes within weeks of posting. Groot, in particular, was a very popular character, with a great deal of fanart appearing practically overnight featuring bb!Groot in its pot. Groot was also the center of the fic I Am Groot, which was posted on 4 August 2014 and became the most kudosed fic on the AO3 within a month.[3]