Power Star is a gen zine with the subtitle, "The Imagination Anthology."

From a 1991 ad in The Clipper Trade Ship: "TYPISTS WANTED for POWER STAR fanzine. Must have computer and letter quality printer. You will receive free issues. If you would like to help, write to Jerry Seward..."

From an early 1997 ad: "POWER STAR, the monthly multimedia science fiction fanzine, needs QUANTUM LEAP fiction. Not everyone has a computer and with POWER STAR, you have the chance to have your work read by more people - not just those on-line. Check out the POWER STAR Home Page at: http://members.aol.com/kimmurphy/private/pshome.html for info on how to submit. Snail-mail submissions may be sent to Kimberly Murphy-Smith... " [1]

Many issues are archived here.

The art is by Nola Frame-Gray.

Got the second printing of #50 - beautiful! The new issue is great; enjoyed the variety, and the new artist (Andrew Kear) is fantastic.

Now, regarding the letter you received with the negative comments about POWER STAR'S continuation of the Peaks story lines. You're going to have a hard time following up the intricate, quirky tales of the Twin Peaks television series in a way that pleases everyone. (Even David Lynch himself couldn't do it, if the icy reception Twin Peaks: Fire Walk With Me received at Cannes is an indication.) The Peaks stories you have printed are well-crafted and dramatic, and, if many readers are to be believed, true to the original development of the series' characters. I applaud Ms. Murphy for blending in her own vision and spirit without losing conceptual integrity. Twin Peaks is controversial, and if it tried to please everyone, it would cease to be Twin Peaks. I am glad that David Lynch, Mark Frost, and, for POWER STAR. Kimberly Murphy have tried to make something that is both art and entertainment, and not just commerce.[2]

Thank you for Issue 51 of POWER STAR.

I enjoyed all the illustrations, even though I'm not into either Quantum Leap or Lost in Space. I've never chosen to watch a single episode of either series, but I have a vague familiarity with the principal characters and the premises. Of course, if Simon MacCerkindale were quantum leaping all over the time continuum, I'd definitely be watching. However, Scott Bakula doesn't "do" it for me.

I also have great concern for the souls he displaces from their bodies. How would you feel, if someone hopped into your body, and when you came back, you found that he had turned out several issues of POWER STAR without your consent or knowledge. The fellow seems to have good intentions, but he is, after all, body snatching!

Come to think of it, I'm actually rather glad that Simon doesn't have Scott Bakula's role, because I'd hate to see him in drag!! The thought of my favorite male star pregnant, for example, is too gross for me. (I never use the word "gross" in my everyday vocabulary, but in this case it's especially appropriate, because "gross" - with an e - also happens to be French for pregnant.)

I'm having enough trouble, as it is, stomaching Simon's choosing to let Sophie Michaud ioin the Counterstrike team. I think Stone has been displaying tremendous good humor: I certainly could never tolerate living half my life on a plane with Gabrielle! The very thought of her on board gives me claustrophobia!

My objection is not to the idea of recruiting a resourceful world-class photojoumalist for the team, but to the woman Sophie Michaud makes of her. I find Gabrielle's credentials completely unconvincing. If Cyrielle Claire (Nikki) were playing the role, we'd see some alertness, some sharpness, some intelligence. We'd see the "wheels go 'round" inside the lady's cranium. We'd see Gabrielle thinking.

But when Sophie stares at the screen before her, I can't believe she's discovering anything - a fact, an idea - for the first time. Her sluggish acting infuriates me. I want her off the show so desperately it hurts!! She harms the series immeasurably. (Or perhaps it can be meaured: I'd expect a drop in the ratings between Cyrielle's episodes and the ones we're seeing now.) From Kimberly, I gather that you somewhat agree with me, or at least can understand my frustration.

I also enjoyed Kimberly's astute synopsis of each of the Manimal episodes, and the wild autographed picture Simon signed for her. I've never been able to watch Twin Peaks* but I have to agree with Kimberly that Kyle MacLachlan is one of the most attractive actors on screen today. So I liked all these pictures of the fellow in the issue*, I just wish they were making costume romances for the man to star in. Instead of making him work for David Lynch.

I did read Kimberly's story, simply because she wrote it - and she writes so well, that even if the characters are net emotionally close to me, it's still a smooth, easy read.

I'm afraid if I ever found myself in Twin Peaks, I'd get out of town by whatever means possible, as fast as I could. I dread being trapped in David Lynch country. (That was a vile, nasty thing he did to Agent Cooper, when ABC killed the series. I managed to watch part of that episode; but it only confirmed my distaste for the show. And when even the hero turned evil - well, that did it for me. I know Kimberly has written Coop out of the Black Lodge. But I believe Lynch and his work should be quarantined.)

I remember how impressed I was when she told me that you had been issuing POWER STAR on a monthly basis. The only fanzine I had encountered. Longbow was lucky to come out annually. Unfortunately, Kevin Costner seems to have dispatched Longbow with an arrow of his own. I expected the movie to have deleterious effects on the intensity of fan interest in the British (Michael Praed/Jason Connery) version of Robin Hood (Robin of Sherwood). My concern appears to have been justified: I've heard nothing mere from the folks who published that well-written, well-designed zine. But POWER STAR - also well-written and well-designed - still radiates! Over fifty issues of POWER STAR so far!

Thanks again for your superb generosity, and congratulations on a job very, very well done. [3] 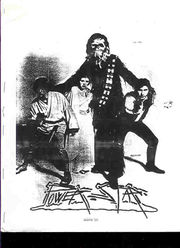 Power Star 52 was published in 1992 and contains 60 pages. It was edited by Jerry Seward.

The art is by Nola Frame-Gray, J. Calvin Smith. 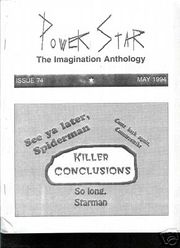 Issue 78--FANTASTIC TELEVISION `94! Primary story: CAPTAIN SCARLET AND THE MYSTERONS collide again as Spectrum tries to protect a World Navy exhibition in a "Time Warp Tales" reprint of the out-of-print "An Exercise In Hope". Also: A bank holdup in Spokane two days before Dale and Audrey's wedding draws Dale and Diane's attention away from TWIN PEAKS in the complete-in-this-issue story "New Lives"; an ALIEN NATION filksong, "We All Live In An Alien Nation"; QUANTUM LEAP filksongs "Bringin' On The Rain" and "Quantum Blues"; reviews of THE SHADOW and the Japanese kids' series ULTRA 7.

Power Star 81 was published in December 1994 and contains 74 pages. 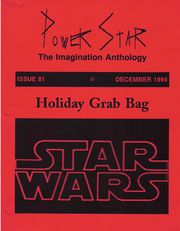 You may have noticed all the Internet stuff we've used lately—the graphics, news, and e-mail jump out right away. But have you noticed the stories? Two pieces last issue came from e-mail. One came through e-mail last month. What this means is that our electronic experiment is taking off in a way even I didn't expect. As I write this in October 1994, six months after we joined up with our first BBS, the Anne Arundel Information Exchange, we are now one of the fastest-growing e-zines (electronic zines) on the Internet. 30 BBS partners now make up our ranks, and not a day goes by that I don't get a re(^uest for an issue by e-mail from someone who read about us on USENET. Jerry got a letter from a woman in Belgium who'd heard about us on the Internet. Our electronic readership outnumbers our print readership at least 5 to 1 (hard numbers on the Internet are hard to come by, but I do know the approximate readership on the BBSs each month.

I bring this up for two reasons. One is that we've gotten a lot of positive feedback on the increase in variety in our issues, and I think the Internet has helped that. The second is that, sadly, we've had to change our internet address. By the time you read this, AAIE will no longer handle Internet e-mail. I'll miss Bob Nassal, and wish to express my thanks to him for the six months he was able to help us with this grand experiment, Power Star online. We have, however, found a new home: ACE Online, in Silver Spring, MD.

As our Internet involvement grows, we'll explore what all is available for the science fiction fan. This issue brings one of the staples of the Internet, the FAQ. FAQ stands for "Frequently Asked Questions" and is the number-one most requested item in most newsgroups on USENET (as in, "Can somebody repost the FAQ?" or "The answer to that question is in the FAQ"). The FAQ representative in this issue is the Babylon 5 FAQ, posted monthly to rec.arts.sf.tv and several other groups.

Power Star 85 was published in 1995. HAPPY 5TH ANNIVERSARY, TWIN PEAKS! Primary story: A being from the dream realm is causing nightmares for Audrey and Diane and to stop him, Cooper must keep an "Appointment with Morpheus". Also: J. Calvin Smith's analysis of one of TWIN PEAKS' most controversial moments, the death of Madeleine Ferguson, in "Closed Circle"; a look at the USENET newsgroup alt.tv.twin-peaks and the denizens therein.

Issue 88--IT CAME FROM OUTER SPACE II! Primary story: A space trader transports a very unusual cargo in the complete-in-this-issue original tale "A Trader's Tale". Also: The conclusion of PROJECT:U.F.O. story "Reunion: The Men In Black Incident"; conclusion of the CAPTAIN SCARLET AND THE MYSTERONS script-story "Pawns Of Evil".

Issue 90--FANTASTIC TELEVISION IV! Primary story: The Book House Boys go on a mission to stop drug runners using TWIN PEAKS as their throughway in the complete-in-this-issue tale "Star Light, Star Bright". Also: The Mysterons threaten the European commanders of the World military--one of whom is Captain Scarlet's father--in the complete-in-this-issue CAPTAIN SCARLET AND THE MYSTERONS story "Uneasy Relations"; reviews of JUDGE DREDD and APOLLO 13; part two of the QUANTUM LEAP/INVISIBLE MAN crossover "Leap In, Fade Out"; conclusion of "The Almost, Absolutely, Positively Ultimate KAOS Kaper".

unknown issue (1999 or earlier): "Happy Birthday, Sam," by Linda Craig. Published as a special issue of POWER STAR. There are also QL-inspired cartoons by Nola Gray.[1]