The Invisible Man was a true buddy show, centered around the sometimes abrasive partnership between Darien Fawkes and Bobby Hobbes, an odd couple if ever there was one. Darien's a professional thief turned reluctant secret agent superhero. Bobby's a paranoid, by-the-book government agent. Together, they fight crime! 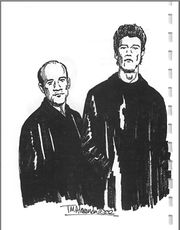 The Invisible Man aired on the SciFi Channel from 2000 to 2002, when it was canceled at the end of its second season. (It has no known relationship to the 1950s show Invisible Man, though the concept is similar.) The Invisible Man Teaser Videos were released in attempt to promote the show.

Signs point to the SFC wanting to just bury the show post-cancellation, hampering it in gaining a wider audience or fandom. It was quickly pulled from the re-run rotation on the SFC, and, probably because of its low episode count, was never released for general syndication (despite being syndicated during its initial run). DVDs have also been scarce; while the pilot episode was released on DVD in France in 2002, it took another year for the first season to be released (in two box sets) in the UK; and the first season didn't get an American DVD release until 2008. As of early 2009, the second season hasn't been released on DVD anywhere, and the show has never aired on US TV since being cancelled.

Darien Fawkes, career criminal, gets out of a life sentence by agreeing to have a special gland implanted in his head. The gland produces "quicksilver", a material that coats Darien's body and bends light around him, making him effectively invisible. 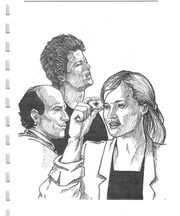 art from the zine Three of Hearts, Darien, Bobby, and Claire by T.M. Alexander

The gland is defective, however—if too much builds up in his system, he starts to go insane with pain and rage, a state known as "quicksilver madness". He needs regular doses of "counteragent" to keep him sane. This very effectively ties him to the Agency, a shadowy, incredibly low-budget government organization, run by "The Official" who refuses to release the formula. He's partnered with Bobby Hobbes, a paranoid former FBI agent.

Stuck together, he and Bobby wind up making a great team, taking on all sorts of bad guys, including Darien's nemesis, Arnaud de Fehrn—a loony genius who originally built the defect into the gene, and the man responsible for Darien's brother's death. The show is rounded out by "the Keeper"—Claire Keeply, a doctor specializing in genetic research whose job is to keep Darien healthy (and under control) -- and Eberts, the Official's assistant.

Original I-man fandom was mostly active on mailing lists and SciFi Channel's old forums.[1] Some fans had a particular favorite character/actor and formed list societies or brigades dedicated to them, with identifying names or acronyms.[2] These "factions" tended to be light-hearted and not serious in their rivalries, with many fans belonging to several or all.

The fandom has stayed active since the show's cancellation, with a fan club,[3] campaigns to save the show[4]virtual seasons,[5] and an I-man con held nearly every year,[6] as well as fanfic and vids.

Nowadays the fandom is scattered across LiveJournal and various forums. It's been hobbled since the show was cancelled in 2002 by the lack of episodes available in syndication or on DVD.

I-Man was pretty much tailor made for me: a true buddy show with great secondary characters, great dialogue, a villain truly worthy of the name, wackiness and tragedy and humor and courage and angst and omg Flowers for Hobbes! and paranoia and lithium and tri-dimensional data viewers and quicksilver madness and matching sunglasses and "little *prick*!" and it was just all good.

I love Darien and Bobby's relationship, how they play but how it isn't all sunshine and roses all the time, either; I love Eberts's quiet adulation of the Official; I love how Bobby and Eberts snipe at each other, and how they bonded as warriors in the file room; I love Kevin and Darien's devotion to each other, despite their differences; I love Arnaud's lunacy and passion, and Huiclov's loyalty; I love Claire's loyalty and caring, and her combination of serious scientist and goofball; I love Bobby's crush on Claire, and how Darien grew to trust her but that the early distrust and anger could still give him an edge with her.

*flappy hands* I love all of it, and all of them. (Okay, I admit, Alex didn't get me to love her during the show, but if she's your girl and you can show me why she rocks, I would love to go along for that ride with you - show me what I missed!) [7]

The fans had a rocky relationship with some of TPTB, especially the head of SciFi's programming department (and later president), Bonnie Hammer. She gave every appearance of disliking the show and its fans (and strong rumor had it that she disliked the fact that the fanbase was skewed heavily toward women—she was trying to program for the golden 18-35-year-old male demographic).

The actors were a different matter; they kept in touch with the fans through chats,[8] and used fan feedback after an episode aired to help shape the show (P = Paul ben Victor, who played Bobby; V = Vincent Ventresca, who played Darien):

P- What happened was, the show would play Friday night, and Friday night late we could log on and get some feedback from the fans. And the fans became an integral part of the show. They were like our critics, our altar ego, our voice, our...help me with this...you know...
V- *not sure where you're going with this, pal*
P-They were just a strong element, like a third voice to the show. And Monday morning, we'd show up and we'd want to know what the ratings were, of course, but almost more important was what was the feedback from the fans.
V- Cause they were smart. They were really smart.
P- Really smart. Thank you. That's what...
V- And they loved the show. It was weird...we created...like we were in the show…
P- *to the audience* And you've become a part of that, which we appreciate.
V- But it's people's love of the show that made us more committed to try and make the show as good as it could be.
[...]
V- [...]I think you were sort of alluding to it earlier that we were sort of doing the show and the fans really sort of took to it, and then all of a sudden there was someone to make the show for. And that was cool. You're right, it was sort of in between doing a play and a big TV show, sort of a niche, sort of cult following that really their encouragement, and their love for it was sort of contagious and it filtered down to us and all of a sudden we were invested in it more.[9]

Mike McCafferty (who played Eberts) was especially involved with the fans; he's an SF fan himself,[10] and he loved being in touch with the fans, in chats and on the SciFi messageboards. He provided commentary and behind-the-scenes notes about new episodes as they aired, known as the E-files (Eberts' Files). When the show was cancelled, he broke it to the fans via the boards before the official announcement was made.[11]

One exception to the general good feeling between fans and actors was Brandy Ledford, who joined the cast as agent Alex Monroe in second season. The fanbase largely assumed that she'd been added at the network's insistence, rather than because the creative TPTB wanted to add someone new. Her character, which bore all the hallmarks of a Mary Sue,[12] was generally seen as an interloper in the show's already established dynamics—not just between Darien and Bobby, but to a wider extent among Darien, Bobby, and Claire, as well as Eberts and the Official. (It wasn't just the fans who felt this; the cast rarely, if ever, referred to her when talking about happenings on set, and the second season wrap-party picture that made it out to the fans included every regular cast member except her.[13])

Most of the fanfic focuses on Bobby and/or Darien, and ranges from playful fluff to angsty dark, much like the show. Where the show tended to focus on Darien's quicksilver madness for its darker episodes, though, the darker fanfic tends to focus on Bobby's obsessive paranoia, especially in slash stories, where that paranoia affects Bobby's relationship with Darien. Sometimes the Keeper's role is also portrayed darker, for example in Points of View by Sanguine (site is now offline and story not archived).

When the Quicksilver Archive and the Invisible Man Slash Archive went down, some of the online fic was lost, including several of the winners of the I-man Fanfic Awards (site is now offline, only portions are archived here. Sadly the list of winners was not archived).