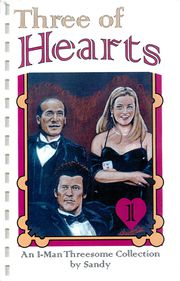 Three of Hearts is a 114-page explicit slash and het anthology of Hobbes/Fawkes/Claire stories by Sandy. It is digest-sized with a comb binding. Cover art by TM Alexander, with color and black and white interior art by PJ Alexander and TM Alexander. Cartoons by PeeJ.

"Three of Hearts, all Hobbes/Fawkes/Claire stories, might even be considered better than Straight to Naughtyville but it is m/m/f and that's not to everyone's tastes." [1]