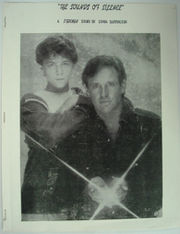 The alien Paul Forrester and his human/alien son Scott Hayden. Cover of The Sounds of Silence.

The single-season television series Starman was a spinoff of the 1984 feature film of the same name starring Jeff Bridges and Karen Allen. 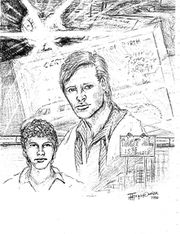 The series' premise was that the film's alien returned 15 years after the movie to find his son living in an orphanage. Together, father and son toured around the American Southwest looking for the boy's mother.

Starman fandom coalesced around the (unsuccessful) efforts to prevent the series from being canceled after its first season. Spotlight Starman formed in 1987, and still produces the "Blue Lights" newsletter/zine, runs the STARMANET mailing list, and sponsors annual conventions.

The fandom has never been a prolific producer of fan fiction or fan art, although there were a fair number of print zines being circulated in the late 1980s.