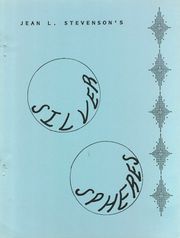 Silver Spheres is a gen 74-page Starman (TV) anthology with stories by Jean L. Stephenson. It has no interior art.

The zine contains fifteen stories and vignettes and two poems. All are prequels, sequels, or expansions of Starman episodes, such as how the Lockharts came to raise Scott Hayden, Jr., Paul Forrester's first meeting with Steven Putnam, Joanna and Eric Kendall talk about Paul, etc. Vignettes with Fox's point of view are interspersed throughout.

From the editorial page:

Poems, stories, typing and insanity by Jean L. Stevenson, support and proof-reading by Bill VandeWater, Anne E. Zeek and Juanita Salicrup, back cover art by Mary Stacy MacDonald and star graphic by Russell Roman. This one is dedicated to all our mothers and to the mother I wish to be... Now, go! Read what you paid for!

This is a zine taken from the movie and subsequent television series of STARMAN. Now, if you require an explanation, the TV show took the point of view that Jenny Hayden's child might eventually have a need for the father to return. Various adventures ensued.

In these stories I'm attempting to celebrate several of the marvelous aspects of the series: the on-going, steadily growing relationship between father and son; secondary characters with such life and reality that they seemed perfectly capable of supporting stories entirely separate from the mainline; a philosophy that said life and love can be strong enough to change the world; and finally, the interesting character of the very human being whose death left a more sturdy vessel for the Starman's second and longer visit. We mostly learned of Paul Edward Forrester after he died. But what we learned hinted at tragedy—the loss of a man with great talent growing out of a bruised and loving heart....

One important thing. I've only scratched the surface of this delightful series. If you're interested, do look for someone who has the tapes. It rewards a viewer's attention.