The table shows the source shows, movies and books with large slash followings; the list below shows the smaller sources from the '60s until now. 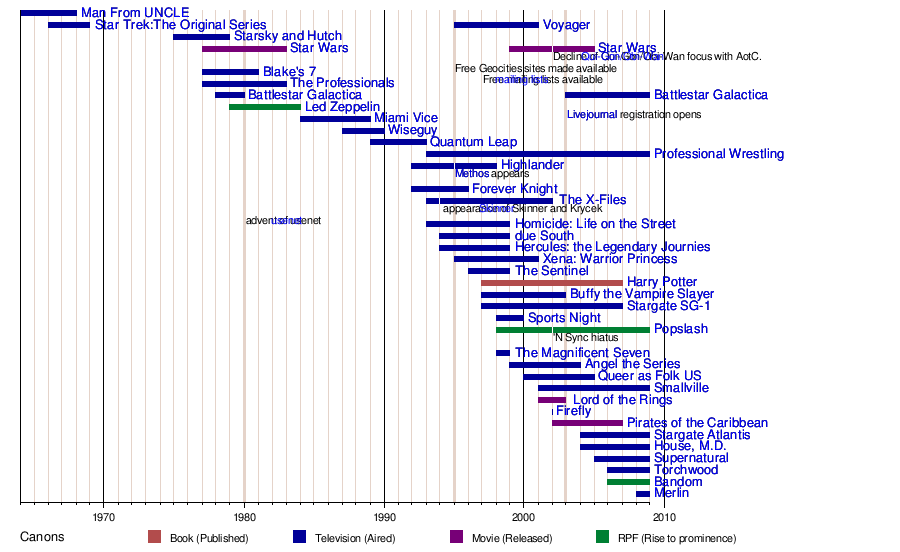 Smaller, of course, is arbitrary

Was there really a Golden Age of slash?

After compiling the timeline above, Sandy Herrold posted her observations in her journal about the rise and fall of slashable source:

"So, I was making a Timeline of Slashed Shows/Sources for Fanlore, and I couldn't help noticing that 1995 - 2004-5 was a Golden Age of sorts, a time when slashy shows and movies were widely available.

When I got into fandom in the '80s, all the big slash fandoms were "closed canon" -- Star Trek, The Professionals, Blake's 7, The Man From U.N.C.L.E., Starsky & Hutch. There were a few smaller shows/fandoms -- Miami Vice, Wiseguy, Quantum Leap, Forever Knight, Highlander (until Methos showed up) -- that gained a few slash fans while they were on the air, but almost by definition, the big fandoms (the "real" fandoms?) were the closed ones -- the open ones were transient, and not likely to grow to the same size as the closed ones.

Then, about 1995, it all changed. Every year, a new slashy show, or two! And they got big, bigger, HUGE! They rivaled and then surpassed the old fandoms! This...this was new. I have Virgule-L posts in 1992, fan after fan saying that they didn't really watch TV, just rewatched fannish source on VHS. By 1995, everyone is watching current TV avidly. (And it now occurs to me that 1995 was as fandom was first starting to colonize the Internet...)

Maybe pictures will make it clearer. Click on my table below to look at the Golden Age -- or go straight to the fanlore page that shows the entire last 25 years of fannish source:

ETA: I'm not saying there were more FANS during the (so-called) Golden Age, just that there were so many more fannish options. Right now, if you've already spurned SPN, and you're getting tired of SGA (I'm waving at you, R), there aren't so many large fandoms waiting for you to check them out." [1]