The fifth movie in the franchise, X-Men: First Class,[1] released in 2011, was another prequel which attracted enormous amounts of fannish attention. The sixth film is a sequel to X-Men: The Last Stand focusing on Wolverine, The Wolverine (2013). The seventh film is X-Men: Days of Future Past (May 2014) which is a sequel to X-Men: First Class but merges with the earlier films actors/characters closer and is based on the same storyline from the comics.

In October 2015, Marvel Television announced that two television series based on X-Men characters, Legion and Hellfire were in development and would take place inside the X-Men Movieverse. Legion, based on the character David Haller, was ordered by FX and aired in 2017 for an eight-episode season. Hellfire was later dropped, and an The Gifted X-Men television series was announced,[3] which aired in late 2017 for thirteen episodes and is not set within the XMM or at least not in the two known timelines.[4] 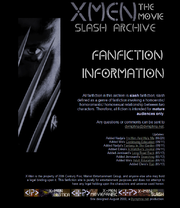