Team Fortress 2 is a 2007 first-person shooter created by Valve as a sequel to the Quake mod Team Fortress. Team Fortress 2, or TF2, was first released for PC and the Xbox 360 as a part of the Orange Box, along with Half Life 2: Episode 2 (and the previous episode and Half Life 2 proper) and the surprise hit Portal. Due to being bundled together with the highly anticipated HL2: Episode 2 and the smash hit Portal, TF2 got a wide distribution. The game became free to play in 2011.

Team Fortress 2 players choose from a mix of 9 different classes to play: The fast but fragile scout; the flamethrower-wielding, close-quarters based Pyro; the balanced, rocket-based Soldier; the grenade-tossing Demolitions man (demoman for short;) the hulking, minigun-toting Heavy Weapons Guy (or Heavy;) the long-range sniper; the machine-building Engineer; the deceptive Spy and the Medic. Each class must work together to support its team and accomplish a specific goal. The classes are further customizable with different weapons that change the strategy used when playing the class, along with purely-decorative hats and miscellaneous items that have spawned their own economy. Team Fortress 2 has gained some acclaim due to its offbeat playstyle and stylized, cartoon-like graphics, along with a vast fanbase. 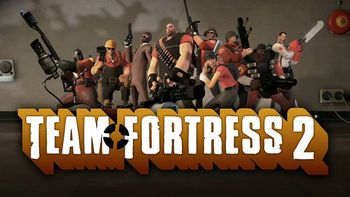 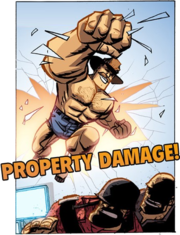 Team Fortress 2 takes place in an alternate universe in the 1960's. The game revolves around two companies, Reliable Excavations and Demolition (RED) and Builder's League United (BlU.) The companies are actually fronts for mercenary groups that have been hired by two brothers, Redmond and Blutarch Mann, who are vying for control of the supplies of gravel in Australia. Both groups receive information from a woman known only as the Administrator, and are supplied weapons by the incredibly-manly Australian Saxton Hale, owner of Mann Co.

TF2chan[1] was a very active community in it's time, with discussions, fan art and fic writers. Unfortunately the server archives have been lost several times; and the ephemeral nature of text boards, and the community's disregard for archiving means most of the works from the heydays are lost in the mists of the internet.

Due to the humorous nature of the game, there are many memes ranging from the classes' catchphrases to the common events of gameplay.

Due to its popularity, there is a large amount of fanart on DeviantArt.

One notable fan artist, Makani, had her design of The Administrator canonized when it was purchased by Valve. Makani was also hired by valve to create official art for merchandise and TF2 comics.