From Fanlore
(Redirected from Polyfic)
Jump to navigation Jump to search

Most fans would describe it as being deeper and longer-lasting than a one-time threesome/moresome, but how much deeper is down to an individual fic writer. Much like real-life polyamorous people, polyships in fandom are merely multiple simultaneous relationships with the consent of all involved parties, so all characters need not be dating each other for a ship to be considered poly.[1] Often, fans ship a polyship because they multiship a particular character or because they're simplifying a love triangle.[2]

Polyships are often treated as a distinct category from het, femslash, and slash ships, at least for the purposes of categorization among fans.[7][note 1][9][10][note 2] Common poly relationships within a particular canon may be described as "the OT3/OT4/etc." It's generally understood which characters are involved, but in some canons there's ambiguity in the term among the general fandom even if specific fans have a set meaning.

This does not include, however, stories about love triangles that leave one (or more) of the characters out in the cold, or cheating. Your story may contain elements of these, but when posting, consider whether it's really, truly in the spirit of this community and scratching a fandom itch that's...well, not scratched too much.

Stories that start out poly and end in monogamy or stories depicting a couple who occasionally have a casual relationship with a third might be considered polyamory by some fans, but those situations are more personal. A typical polyfic set-up would be either an established relationship or a developing relationship between three characters, such as Harry, Hermione and Ron from Harry Potter. That relationship could be a triad, in which all three characters are dating, or a v (sometimes spelled vee) in which a character is dating two characters but those characters aren't dating each other.[13][14] In this example, Hermione might be dating both Harry and Ron but Harry and Ron would not be dating each other. In general, fandom seems to prefer triad to v type poly although this varies from pairing to pairing and author to author.

There are also trope-specific variations on polyamory. Group marriage is common in Alpha/Beta/Omega fic featuring poly, often with one character of each dynamic for "balance," as well as more harem-style relationships where one alpha may have multiple omegas. Fic featuring BDSM themes, also frequently features poly. As in real life, one Dom can have multiple subs who may or may not know each other and fic may involve these subs meeting each other for scenes or entirely new relationships being formed. A sort of hierarchy can also be established between a dom, a switch, and a sub like in Never Never Never Stop for Anyone by aimmyarrowshigh. Some fic also borrow the concept of sedoretu from Ursula K. Le Guin's "A Fisherman of the Inland Sea," which is an involved sort of group marriage between four people, and troll romance from Homestuck is a popular trope even outside the Homestuck fandom.

Much like the very concept of "polyamory" has shifted from being a kink to a valid form of expression, there has been a discussion around the language used to discuss polyamory.

This began in 2015, when Tumblr users politely asked if polyamorous people could stop using the tag #poly so it would be easier to find the Pasifika community. The post that was frequently passed around as the "starting point" for this discussion, however, was the following post:


Hey, can any polyamory blogs with a follower count please inform the palagi portion of the community that “poly” is a Polynesian community identifier, and is important to our safe spaces. Using “polyamory” is cool just like using “polygender” and “Polyromantic” and or Polysexual” is cool. But the abbreviation “poly” is already in use.[15]

There was a significant amount of discussion on actuallypoly's post about the history and usage of the term "poly" within the polyamorous community, with resistance to the change from those who are polyamorous.[16] Similarly to the shift from "NB" to "enby" by the nonbinary community at the request of black activisits who use the term as shorthand for NBPOC (non-black people of color),[17] many people have begun to prioritize the term "polyamory" over the abbreviation "poly" at the request of Pasifika people, especially in cases where the shortened form can cause confusion. This has led to both "polyam" and "polya" emerging as alternative shortened forms of polyamory, with polyam seeming to be the preferred term among the wider polyamory community. Within fandom, however, there has not been a similar adoption of "polyamships" over "polyships" although polyamships is in use as a term,[18] but there has been a shift from "poly" to "polyamory."

The discussion continues to evolve, however, as while some Pasifika people have expressed that the word poly should only be used for Polynesian people[19] the majority of people pushing or reminding people to use polyam over poly now are doing so because it has been weaponized by white people[20] in a similar fashion to the way queer has been reposited as a slur by TERFs.[21] This is not to say that not using "poly" in cases where the meaning is confusing is a bad thing, more that saying "reminder to use "polyam" because "poly" is for Polynesians" in unrelated discussion has become performative wokeness and, occasionally, a method to shut down conversations.

i literally have certain ships muted so i dont have to look at them to cultivate My space so why are you trying to shove them at me? like how am i the bad guy for being gay and wanting to consume gay content. why does everything have to be poly to prove u care about women???[23]

It really bugs me when people say that it's out-of-character for a particular character to be poly, unless they've explicitly declared themselves to be monogamous in canon. Like, in "White Collar," my main fandom, the character Neal has a little monologue about how he's proud of being strong enough to be loyal to one person. So you could say that that's canon evidence that he's monogamous (at that point in time -- as I said, people change their minds). But absent something like that, chances are you mean that they're not stereotypically non-monogamous. It's like the anti-slash folks who complain about "writing straight characters as gay," when there's no canon evidence that the characters aren't "at least" bisexual, except that he likes cars and football and doesn't know what mauve is, so he must be straight. Not all polyamorous people are free-love hippies or sex-obsessed perverts or weirdos. Okay, most poly people I've met are on the geeky side in one way or another, but a lot of us aren't even obvious nerds (okay, I am, but not all of us are)! Poly people can be liberal or conservative, professionals or slackers, old or young, and as mentioned above, most of us don't go around shouting it from the rooftops. So you can write pretty much anyone as poly, and nobody can say with any certainty that it's "out of character" for them.[25] 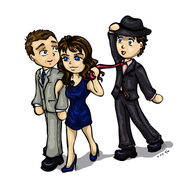 There are numerous fandoms where certain poly ships are either canonical, or popular with fans: 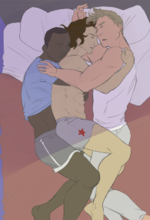