Harry/Ron/Hermione refers to the romantic relationship involving the Harry Potter series's main "trio," Harry Potter, Ron Weasley, and Hermione Granger. It is sometimes referred to as "Ménage à Trio," a pun on the French phrase "ménage à trois," or more generally, simply "Trio" (as in "Triofic").

Though Harry/Ron/Hermione has become one of the most popular OT3s in Harry Potter (or any) fandom, it was slow to take off and there was a surprising dearth of quality stories (especially longer fics) in the early fandom. (See the discussion here) 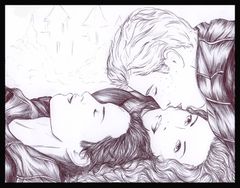 HarryRonHermione by ericahpfa. Ink drawing of Harry, Ron, and Hermione lying together on the Hogwarts grounds.