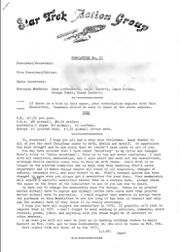 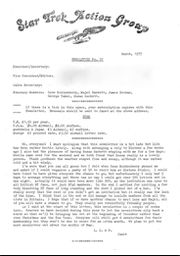 Star Trek Action Group 23 was published in May 1977 and contains 18 pages. 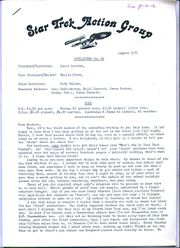 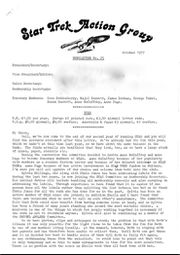 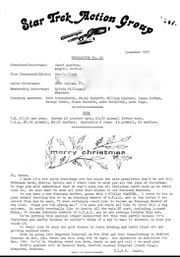 the list of the writers for the first 13 episodes of the Star Trek series on television, a series that never happened 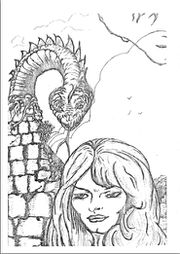 art from issue #26 by Martin Bradely; the writing contest for the next issue was to write a Star Trek story with this scene in mind

By all means let's take a leaf from SF fandom - their organising abilities have evolved over a fair number of years so that now they produce highly successful and relatively smoothly run cons. If we are to continue to have STAR TREK cons, they must improve every year or else decline. Basically I'd like to see cons planned over a longer period of time and responsibility for producing them shared among many more people. Does anyone else also get the feeling that by going to a con you're paying your money and going to see what's happening thanks to a small group of people? I'm sure many of us would like to go to a con knowing that we'd helped, if only in a small way, to 'get the show on tho road.'

I totally agree with Ann about organised conventions. However, there is one drawback I can think of, that is, with people voting, it might mean that the convention always would be held in the south or alternatively in the north. Would it not be better if we worked out some system in which, one year the convention would be held in the north of Britain, the following year in the centre while the year following that, in the south, then back to the north?

Science Fiction conventions seem to be run primarily for adults, and from what I have seen of them, most of the money is made in bar takings. STAR TREK conventions are not run along adult lines (by adult I mean X-certificate), they are primarily family affairs, run for Trekkers of all ages. If I want to go to a SF con, then I will go to one, and if I want to go to a ST con, again I will go to it, but I would not mix the two! The atmospheres are too dissimilar. The idea of voting for a convention I also find stupid. As I understand it, the group that won the vote would be solely responsible for the convention, and all the organlslng. Fine. What happens if all these groups are made up of people who don't know what they're doing, or who are other than Trek minded? Will we end up with conventions run, not for charity, but for the money the organisers and dealers can fork in? Is this the sort of con we want? I don't think so. 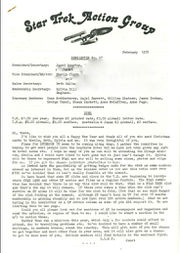 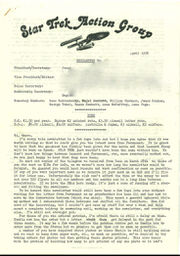 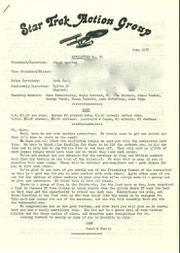 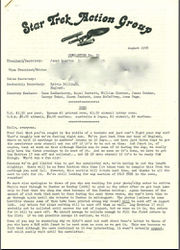 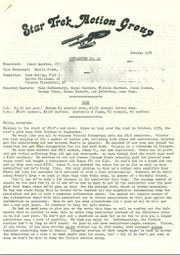 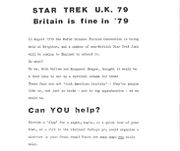 a call for fannish hospitality: "In August 1979 the World Science Fiction Convention is being held in Brighton, and a number of non-British Star Trek fans will be coming to England to attend it... We thought it would be a Good Idea to set up a survival scheme for them! These fans are not 'rich American tourists' -- they're people like us, and just as broke -- not to say apprehensive -- as we would be. Can you help? Provide a 'flop' for a night, maybe, or a quick tour of your town, or a lift to the station? Perhaps you could organize a mini-con in your front room! There are many ways you could help." 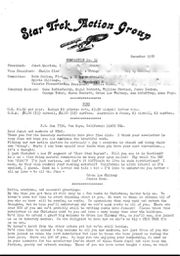 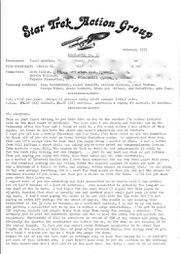 Star Trek Action Group 34 was published in April 1979 and contains 42 pages. This issue had a 750 print run (33,000 pages), and the editors hauled four boxes of the zine to the post office for mailing. 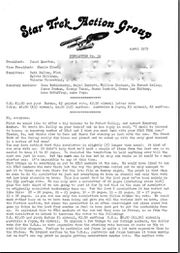 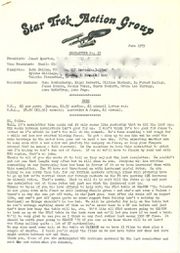 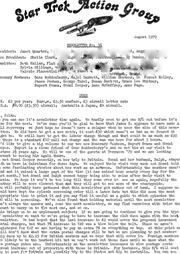 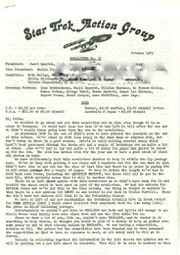 Star Trek Action Group 38 was published in December 1979 and contains 32 pages. There were 900 issues printed. 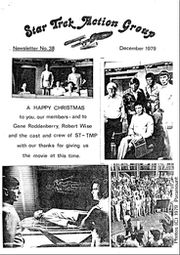 Star Trek Action Group 39 was published in February 1980 and contains 20 pages. There were 1000 copies printed. 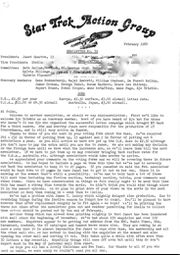 Star Trek Action Group 40 was published in April 1980 and contains 48 pages. There were 1050 copies printed. 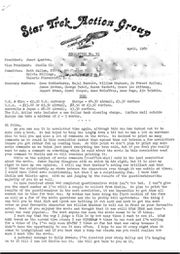