Star Trek Action Group 41 was published in June 1980 and contains 38 pages. The number of issues printed was 1040. 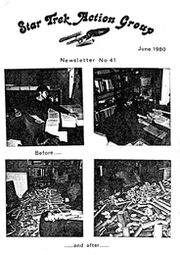 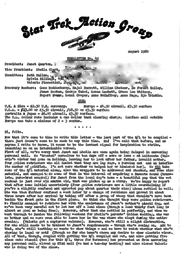 We have never made any secret of our policy regarding stories - we've listed our guidelines more than once. We believe - and many other fans believe - that ST is the Enterprise and her crew stories about other ships, other people, are science fiction, not Star Trek. As science fiction we may enjoy them - although we have found many fans saying that they only scan 'Star Trek' stories that involve other ships and crews. With particular reference to death stories, we printed Legacy, in LE 8, against our better judgement; one reader read about halfway, realised that Kirk really was dead, and tore out the entire story and destroyed it with the remainder unread because she couldn't bear to read anything so upsetting. Granted that was the most extreme reaction. We don't, ourselves, enjoy death stories. Death happens; death is unavoidable, I do not however consider it a subject about which I want to read - under any circumstances. Janet cannot understand how anyone who loves the Star Trek characters could want to write stories in which any of them die (or read such stories). Many fans agree with us. Jonathan's story was good; it deserves to be printed somewhere. I don't deny that. It has been suggested to me that we could bend our policy with regard to excellent stories on any of the themes we don't usually touch - if we had accepted that suggestion, I would have accepted this story. But so far the only people who have suggested that we should print death stories are people who have written such a story. 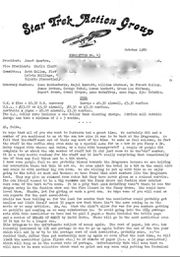 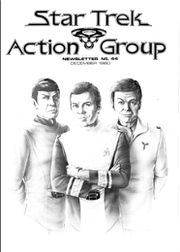 The Trekkies all scream, "They can't be queer!"
But is this reaction produced by fear?
Fear of our heroes having strange desires
That unnatural actions light their fires...

Yet Star Trek is of a different time
Where prejudice merely disrupts the rhyme!
Where there is tolerance of all,
Not ugly names that we might call.

And we Trekkers so progressive, so caring
Must in our own time not condemn such pairing
For love is the sign, the only way.
Whether that love be 'straight" or 'gay'.

We must learn and very quick
That we should live by IDIC
End the prejudice, the hate, the blame;
Make it the love that dares to speak its name.

Star Trek Action Group 45 was published in February 1981 and contains 18 pages. There were 960 copies printed. 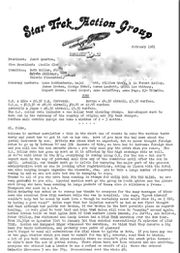 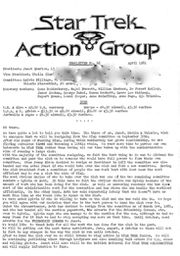 It just does not follow
That, in the future, the freedom to choose
Whom to love - same sex, or whatever -
Is a freedom our heroes will use.

Jim's always a hit with the ladies;
Spock loved Leila and poor Zarabeth.
Does Kirk ever give rise to suspicion
That he prefers the Vulcan's caress?

Let's go back to the truth of the series!
To some fen it may come as a shock -
But in seventy-nine episodes
(And one awful film)
Kirk never goes to bed with Spock! 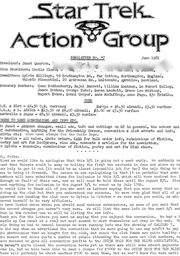 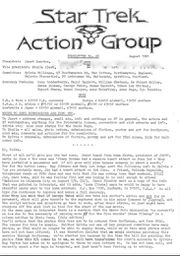 I feel I should be clear
So that you and others can truly hear
I did not say Kirk and Spock are gay -
- Not in the series, there's no way

I have not joined the 'K/S' lot
Nor do I believe, not one jot.
My poem was prompted by another thought
Which worried me, so an answer I sought.

K/S was attacked in many views
So many, in fact, it had to lose
But being gay itself came under fire
The results of which could be most dire

Tolerance was the subject of my plea
Respect and love has to be the key
But if Kirk and Spock were gay
It shouldn't matter to us anyway.

So, condemn 'K/S' - by all means do
But don't condemn the principle too.
Into the future, we turn the pages
Of tolerance, we learn by stages.

Star Trek Action Group 49 was published in October 1981 and contains 30 pages. It is the first issue done by the committee: Sylvia Billings, Cilla Futcher, Wendy Downes. 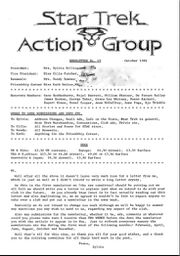