You may be looking for the U.S. convention Shore Leave. 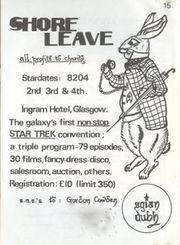 Shore Leave was a Star Trek: TOS convention that was held in Scotland in 1982.

This con MAY be related to the zine, Sgian Dubh.

While in Scotland I attended Shoreleave Con, a perfectly delightful small con which featured two TV channels in every hotel room, running continuous Trek episodes, movies, and other tidbits, like filksinging. It was seldom necessary to ever leave the rooms to do a lot of unnecessary circulating—unless you felt like it. [2]

I would like to thank the Shore Leave committee for a very enjoyable and well-run con. The videos were excellent. [3]

from the mentioned zine auction

Shore Leave was a restful con. Not, of course for the organisers, who worked themselves into the usual state of exhaustion but for the attendees, for whom this was a different kind of con. Although there were the usual discos and entertainments, attention centred on the video showing of all 79 episodes and a number of films on three channels.

Being the proud possessor of a video, I was not so desperately in need of injections of Trek as some who were there (yes it is a drug, who has not felt withdrawal symptoms?). Still it was very relaxing to watch the episodes with friends and to have the luxury of so many to choose from. The actual running of the equipment was extremely well done, and I commend the technical team for their good work.

The Ingram Hotel is pleasant and well situated and as far as accommodation was concerned, had only one defect; no lounge (there was bar seating but no totally separate space). This meant that the weekend passed as a series of room parties and little the worse for that; it was good to relax and really talk to people. Somehow larger cons seem to flash past in brief, unsatisfactory snatches of conversations. The sales room was rather quiet but this stemmed from the fact that many of the attendees were either new to Trek or not zine readers, rather than from lack of interest by established fans. The same is true of the zine auction, where prices seemed lower than usual (see list attached). However, the event was much enlivened by the techniques of the joint auctioneers (whose names I regret I did not discover). Undoubtedly the best way to up the price of a [Gayle F] poster is to unwrap it during the bidding...slowly!

Altogether, Shore Leave was a very pleasant experience. The atmosphere of a mini con is less frenetic than that of a full blown affair and makes an interesting change. Don't mistake me, please, I love big cons...any cons but diversity, surely is what it's all about? [4]