The Roddenberry Phone Call is the phone call that Gene Roddenberry used to make to every August Party and is an example of TPTB's Involvement and Interference. 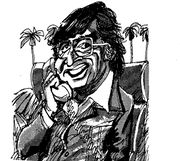 from the 1979 program book for August Party, "The Roddenberry Phone Call," illo by Cory Correll

From Boldly Writing: "The August Party convention was held in Maryland in the 1970s. It always featured a long-distance call with Gene Roddenberry, and the information would then be passed along to the rest of fandom, often by way of reports in various zines."

From The Halkan Council #11 (October 1975): "Gene Roddenberry's phone call to the August Party convention, and it had a remarkably accurate summary of the plot of Star Trek: The Motion Picture." 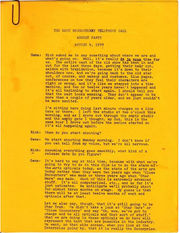 first page of the 1978 transcript, 6 single-spaced page printed on one side; "Rich" is Rich Kolker, click to read. This phone call is also printed in full in A Piece of the Action #66

The August/September 1981 issue of A Piece of the Action printed parts of a transcript of a telephone conversation with Roddenberry made earlier in the year at the August Party. The questioner asked: "If there were a series again, would you be interested in doing it?" Roddenberry's response was, "No. I won't line produce it again. TV is not as it used to be. There are too many people who will try to change what you are doing. I realize now that I had an easier time before. Now everybody has become an expert on science fiction. There are plenty of good young writer/producers who have the strength to fight, and I think they should do it."

Some of these phone calls were transcribed and printed in zines.

The Idea and the Timing

Q. Why did you telephone Gene Roddenberry instead of inviting him to the convention? Why were the calls always on Friday at 7pm?

A. Because we couldn't afford airfare [smile emoticon]. Seriously, expenses was one of the reasons. We did ask Gene later on when we were a little more flush with cash if he wanted to come, but he declined. Why 7pm Friday? Because it was the end of business hours in LA, and most convenient for everyone. Since we knew some folks would miss a Friday night event is why we started transcribing and mimeoing the phone call during the convention. . [1]

A Fan Describes Some Behind-the-Scenes

One of the most unique features of the August Party was the annual phone call to Gene Roddenberry in his office at Paramount each Friday of the con. The interviews were always impromptu; Rich [Kolker] would gather questions from the audience and present them to Roddenberry after the Great Bird told us what was going on with the "Star Trek" crew.

These transcriptions should help in a number of fannish disputes about the making of the picture compared with its actual outcome. Perhaps we expected too much out of a major picture coming after a ten years' absence. I feel that Roddenberry was not the only one responsible for making "Star Trek"; no producer is alone. Parts of the difficulties are revealed -n casual mentions in the transcript.

However, do not forget that these calls were fun for everyone involved. I remember fumbling to connect the tape behind the stage while Rich tried to get the phone connected properly. during AP4; I remember the awed silence when Roddenberry told us that shooting began the next day; and I remember Squamish. [2]