From Fanlore
(Redirected from Star Cluster)
Jump to: navigation, search 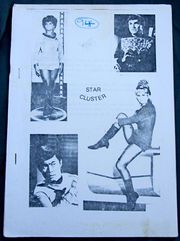 All proceeds were donated to that con's charity, the British Diabetic Association.

STAR CLUSTER is a zine produced by the Aucon '81 committee for whichever charity will benefit from that convention - a worthy aim. It contains six stories which, the editorial says, emphasise some of the minor characters in Star Trek - another worthy aim.

The zine contains two stories by Jenny Elson, and no zine reader will need reminding of the quality of her writing. 'Dawn at Athenike' concerns Sulu and I am afraid that that one does not work at all, for me. Other readers will probably enjoy the story but I found myself skipping over one or two paragraphs of, no doubt beautifully done, descriptive writing, to find out what was happening - and very little was. 'Uhura's Choice' on the other hand is a nicely-writton story of Uhura's early days at the Starfleet Communications centre and her friendship with a male of Vulcan/Terran mixture (not Spock.). I found this one interesting both in the look at the Vulcan and the couple of paragraphs dealing with Uhura's early life, a touching story which I enjoyed.

'New Beginnings' by Sylvia Billings involves the assignment of a new yeoman to the Enterprise., The problems of a simple task give the background to an amusing tale with some funny moments, although I wish Ms. Billings had not tried to keep the identity of the yeoman secret until the end as it was obvious.

'First Assignment' by Lynn Campion is a routine story of another new ensign assigned to the Enterprise. While involving several 'standards' for zine stories so far as injuries and recoveries are concerned, I found it a competent little story - and I intend 'competent' as the dictionary definition, not a put-down.

A return visit for another 'piece of the action' is the basis for 'Action Replay' by Cilila Futcher. Bits and pieces of humour at the start, naturally involving our Captain's driving skills (or rather, lack of them) do not really bring the story alive for me but the cumulative effect of all the mishaps as the story progresses does produce quite a funny story.

Finally, and for me the best in the zine, is 'Father's Day' by Carol Hart. Even the phrase 'Father's Day' has been given a new slant in this curious mixture of philosophical reflection and humour involving the very young Spock with Sarek and Amanda. I am doubtful of some of the Human emotions foisted on Sarek by Ms. Hart but this didn't detract from a lovely story which not only produces food for thought but also brought wide smiles to my face at various points, and I would hope that the humour especially will be as attractive to other readers. Ms. Hart is also responsible for the few illustrations in the zine which I, as a total non-artist, found quite good, in particular the drawings of Uhura and Janice Rand - although that may just be my prejudice as a male. All in all a good zine and the fact that the proceeds will be going to charity adds to the enjoyment of reading. [1]