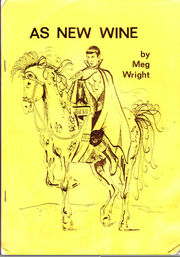 The author said in 1982: "New Wine" grew out of the fact that I was tired of Spock always being the one who had to cover his ears - simple as that." [1]

"Just after Kirk takes command of the Enterprise, Spock is ordered to go on a preliminary survey of a newly-discovered vulcanoid planet. With a newly-promoted Captain assigned to take command for a trial trip, Kirk chooses to accompany Spock as his backup." [2]

This is a single novel written by Meg Wright. It is about Kirk and Spock fairly early in their friendship. Their positions of rank are reversed because they are ordered to survey a Vulcanoid planet which comes under the Prime Directive and Spock must lead the survey.

It is a friendship story that has been lightly written, interspersed with some nice touche so fhumour. Kirk takes his subordinate position as a slave as a matter of fact - very well, all things considered.

It ends by drawing McCoy into the friendship. Enjoyable. [3]

'As New Wine' in my opinion is one of the best I've ever read. (And I have just finished reading it for the third time.) It basically shows the development of the friendship between Kirk and Spock -- how they first work together, and begin to understand each other. It starts with Kirk having commanded the Enterprise for only three months, joining Spock on a planet survey. He sticks up for Spock right from the beginning, volunteering to join him on the survey to study and record the first vulcanoid race to be discovered - a mission which Spock has been sent on by the Vulcan Council. No-one else was available to help the Vulcan - or wanted to - and Kirk is determined to discover what the previous Captain, Pike, had seen in him. The planet culture is of mixed classes, basically Lan and Du -- the Lan being the upper class and the Du their slaves. Kirk has to act as Spock's slave, and Spock is in command - an interesting reversal of roles. During the story, Kirk undergoes beating and poison - but survives through the help of Spock - and we are introduced to the mind meld, which is handled beautifully. Their friendship grows, Kirk is quite surprised at Spock's hidden warmth and kindness and begins to understand him. Spock also discovers he has found a real friend. I particularly liked the last few pages, with the introduction of the 'now' Dr. McCoy - we learn how he gets his nickname. The characters have been fully understood and handled excellently - and there are touches of humour throughout the story, along with a few particularly good illustrations. This story really conveys the deep and close friendship between Kirk and Spock so well - and I found it very believable. To say I recommend this zine to anyone would be an understatement, to say the least!!! [4]

A new captain, temporarily relieved of command, finds an excuse to accompany his Science Officer to Beta Pegasi II. The species are Vulcanoid, but how advanced are they? Why does slavery exist? The survey should provide the answer. Somehow, the survey gets lost in the last third of Meg's story when she places Kirk and Spock in danger. Their fragile friendship becomes more solid after this experience but I found her use of danger irritating. Still, she provides an insight into how these two became firm friends through their joint experiences plus reasons why Spock holds Kirk in such high esteem.[5]

Kirk has recently taken over command of the Enterprise and is frustrated because he does not understand his First Officer, Mr. Spock. At the Vulcan council's request, Mr. Spock Is seconded to make a preliminary survey of a planet where there is a newly discovered Vulcanoid race. He is to go alone, against normal procedure because "who in hell wants to spend two months working that close to a Vulcan?" (one very bigoted Commander Torven). Kirk objects to the breach of procedure (and finds Torven objectionable) so he offers to accompany Spock. He has just been offered shore leave because the Enterprise is to be taken over by a newly qualified Captain Owen for his command "trial trip"; KirK lo therefore free to go with Spock. The planet is in an early stage of development with its culture based on slavery. The population of the planet is Vulcanoid, go Spock is in command: Kirk plays the role of Spock's slave. (No, it is not an Adult zine). The zine tells the story of their stay on the planet and is an examination of the relationship which develops slowly between the two men. Other characters people the story and are well developed. In fact the culture of the planet is skilfully evoked through the narrative, and the background of the story "feels" realistic. The story line is strong - I could not put the zine down, and I would recommend it to readers who like a good story and who find the Kirk/Spock relationship fascinating.[6]

This is a zine-era fic about Kirk settling into his new role, and getting to know his first officer under the most intense of conditions. Solid worldbuilding sets the backdrop for an exciting mission with layered twists, as Kirk and Spock go undercover on a Vulcanoid planet that permits slavery, and are forced to act the part to fit in.[7]