With Hoops of Steel 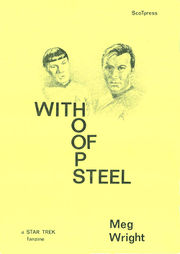 With Hoops of Steel is a Kirk & Spock gen 61-page novel by Meg Wright.

The author said in 1982: "I wrote "Hoops of Steel" because Spock at the beginning of the movie hurt so badly I had to make sure he wasn't going to go away again." [1]

"Unless Kirk and Spock bond properly, their minds will become uncontrollably linked -- but a bond is not so easy to form." [2]

This zine starts with McCoy shouting at Kirk because he is leaving the Enterprise. Spock has also left to go to Vulcan to take the Kolinahr. McCoy tells him he will regret it, but Kirk will not listen. "One day," he tells Kirk, "you'll understand what you have lost."

McCoy leaves and Kirk goes to Earth to a desk job also entering into a contract with Lori. Some time later at their home Kirk is pacing up and down as he finds out from McCoy that Spock has had an accident on Vulcan and they are not sure he will live.

Lori is furious, as they are moulding him into what they (Starfleet, that is) want him to be. Later Kirk finds out that Spock is going to be okay. Two years later he has the chance to go back to the Enterprise. Spock aiso returns; Kirk needed him so he came. Kirk was overjoyed when Spock told Scotty "My task on Vuican is completed." After talking for a long time and saying that the danger was in front of them now, not behind then, they decide on a bond link. They need help achieve the link, and they meet a Vulcan girl called T'Yana who agrees to help them, but when she does Kirk cannot break through to Spock for the bonding as he's frightened he'll hurt Spock. Things go wrong and there is an earthquake, and Spock goes missing in a shuttle; if Kirk cannot find him he will die...

This is an excellent zine, one I will read over and over again. [3]

Excellent fanzine story of the ultimate mental bonding of Kirk and Spock. The author shows a good grasp of the essential elements of both characters. The story is reasonably well-paced; not lagging in more than a couple of places. This is something that all authors should take note of. I enjoyed this particular fanzine more than any imported zines I had read in some time. Definitely worth the cost; I heartily recommend it to all Kirk and Spock fans. [4]

'Man if born free, but is everywhere in chains' to paraphrase Voltaire. This story features the necessity of a permanent mind meld between Kirk and Spock and how they tackle this task and the trials Kirk imposes on Spock make an amusing tale. As Spock always suspected Kirk's thought are not always pure & simple especially towards the ladies. On Penthyrica, this turns a little sour but it is a test which, of course, they pass. All three stories are well-written, action adventure tales that I personally found then a bit too predictable. I find after reading many fanzine stories, too many follow this path. A/U stories can break the the cycle so you can really feel the dangers and be involved with others. After all, 430 people work on this class of starship. How about it? Make the story interesting so that you cannot see any ending until the last page! [5]