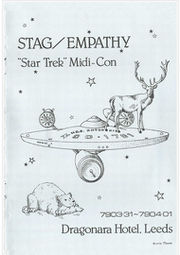 STAG/Empathy Star Trek Midi-Con is a gen Star Trek: TOS con, the seventh British Star Trek Convention. It is sometimes referred to as "The Leeds Minicon."

Despite the fact it was a Star Trek con, the celebrity Guest of Honor was Anne McCaffrey (Pern). Tom Baker (Doctor Who) was supposed to appear but didn't.

The convention began for me on Friday afternoon, sitting in the hotel foyer talking to all the other fans who'd had the sense to arrive early. By evening I'd met many of my old Trekfriends, and a few new ones. I was too excited to sleep much that night, and was up bright and early to start enjoying Saturday. The programme of events started at 10.30, but before that I'd spent an hour and a fair amount of money in the dealers' room, buying mostly zines and a couple of books... The opening ceremony included a half-hour tape by Susan Sackett, Gene's assistant, about the Star Trek film, most of it seemed to be correcting strange rumours that had been spread and we didn't learn a great deal new... A showing of both parts of Menagerie followed, once again I was impressed to see Star Trek on the big screen. After lunch came our Guest of Honour's talk, and as always Anne was super (O.K. so I'm biased - but aside from loving her books I do think she has a great personality) telling of her amusing experiences and answering questions about her writing. After the next episode, the panel of club committees was dropped - things were running slightly late... and The Trouble with Tribbles was shown next. So good to see old favourites like that after what seems such a long time. Then, after a good long break for food, disoussion, gloating over purchases etc, the evening festivities got under way. The Fancy Dress Parade was really good, the costumes just get better from year to year making decisions extremely hard for the judges. This time many costumes were from Star Trek episodes, lovingly and accurately reproduced. Rather ironically, though, the prize for 'best in TV series' went to a very elegant Servalan! (BBC series Blakes Seven) The original designs, including a galactic hitch-hiker, a fantasy heroine and a smart black-and-silver uniformed space patrolman, were of equally good quality. After this I changed for the disco, this took a little while to liven up. Gradually, though, as the DJ's voice weakened, we were able to get the music we wanted. Nondescript (to my mind) disco tunes were replaced by the BBC's Space Themes album, 'I lost my heart to a Starship trooper' and other singalong tracks like 'YMCA' and 'In the Navy' which we , swiftly altered to 'In the Starfleet'! I danced till exhaustion set in, cooled down with lemonade and fell into bed at about one o'clock. There was still another day to go!Sunday morning came. Getting up took longer than last time but I made it, ensured I had missed nothing in the dealer's room and rather than watching 'Miri,' relaxed in the foyer for a while. Someone was playing a tape of the beautiful music from' Silent Running', one of the loveliest of films, so I listened contentedly to that. Feeling more alive by eleven, I then sat through the auction. I never dare to bid, but Rog Peyton as' 'auctioneer is not to be missed. This time he was on top form, selling an empty cardboard box (autographed by him!) and several copies of dud books. First it was a book by James Blish with the first twenty pages missing; next, 'UFOs! Close Encounters of the Fourth Kind' - quite seriously claiming that weird cliens are landing and having sexual relations with Earth people. The extracts Rog read out had the audience in stitches. l,nd this phenomenon was repeated with 'The Psychic Power of Pyramids' to the extent that Rog actually fell off the platform laughing. He managed to sell three or four copies of this 'rare and soholarly work.' On display at the con were a large variety of models, ranging from plastic kits of Space 1999's Eagles and Star Wars X-wings to a lovely sculpture of Mnementh, the bronze dragon, and his rider from Anne McCaffrey's books. Little artwork was in evidence, though, but of the few pencil drawings of Star Trek characters most were very good indeed. In the next room were entries for Alnitah' s Grand Tribble Show, complete with pun-filled pedigrees! This seemed to be a very popular innovation. The Fashion Show was the main event of the afternoon, and as with the Fancy Dress. The standard is improving from year to year. The winning collection this time was remarkable in that it portrayed four totally non-humanoid races effectively without trying to hide the models' Human form, rather as is done in ballet. Also, for the first time, there was a collection with no commentary at all, simple mime was enough for the story of a band of exploring Klingons thrown into utter chaos by their unintentional involvement with a sack full of tribbles!... I thought that would be the last highlight of the con. It was not. A birthclay celebration had been planned in the evening, for Anne McCaffrey and Sheila Clark. Empathy had given Anne, earlier in the day, a ceramic dragon, and at the party Sheila presented her with six whisky glasses on behalf of STAG. The party was a success. It began with a swing, as someone had discovered a piano in the adjoining storeroom and dragged it out. Another musical soul produced a mouth-organ and and Anne led the company in 'When Irish Eyes Are Smiling', 'Danny Boy' etc. Others followed with Star Trek songs of a humorous nature. The birthday cake was huge, deoorated with an IDIC and a delicate shade of blue. Inside it proved to have even stranger colouration, and several people were reluctant to sample it! [1] ... So that was the con, and I think it was the best I've ever been to. The atmosphere was great, everyone just friends -- or was it family? [2]

This convention, jointly organized by STAG and EMPATHY, was held at the Leeds Dragonara on 31st March/lst April 1979. It was the second convention to be held at the Dragonara, and it felt very much like 'coming home,' when I stepped out of the elevator on the reception floor to find that nothing seemed to have changed since 1976. Even the staff seemed as cheerful and accommodating as they had at my first convention there.

We're beginning to develop a pattern here; being in the dealers' room tended to mean that I missed a large part of the programme, and for this particular con I was a steward as well, and was therefore often UNABLE to get to the main hall. I did, however, keep a copy of the schedule. Still in the days before video, there was only one programme for the convention, in the main hall (the Brigante Suite). The convention opened at 1030 on Saturday, and the opening ceremony included a tape from Susan Sackett. This was followed by MENAGERIE I & II, and two blooper reels. After the lunch break, Anne McCaffrey gave one of her excellent guest talks, followed by a showing of THE EMPATH. There was then supposed to be a panel of ST club committees, but this was cancelled (much to my relief at the time), I can't remember what happened in its place. Then THE TROUBLE WITH TRIBBLES and, after a break, the fancy dress and disco. The fancy dress that particular year featured a high proportion of Trek-related costumes as opposed to general SF costumes, something of a first; I was one of 'Mudd's women', and can also remember two Ruths (Shore Leave), an Alice (ditto), a green women (Menagerie) and an Elaan of Troyius. All the costumes were excellent and the Judges must have had a hard time making up their minds. The eventual winners were Robin Hill (best costume), Susan Goddard (best alien), Pat Thomas (best from TV series), Kate Davies (best dressed girl) and Philip Brinkley (best male entry).

On Sunday, proceedings commenced at 10.00 with MIRI, followed by the auction and, after the lunch break, the fashion show. I'm afraid I don't know what followed this as the hoped-for guest, Tom Baker, failed to turn up and as I was busy changing after the fashion show, I never found out what was run in his place. BY ANY OTHER NAME followed, and the awards and closing ceremony were at 6.00 pm, followed by THE SQUIRE OF GOTHOS for anyone staying late....I also remember fondly the Grand Alnitah Tribble Show, where dedicated Tribble owners showed their pets, many of whom had long and truly inventive pedigrees!… As for the dealers' room, there wore three professional dealers represented on this occasion... Fan dealers (aside from, myself, as S.T.C.C.) were Alnitah, Sylvia Billings, Empathy, Pat Thomas, Starship Exeter, Starship Excalibur, STAG, beyond Antares, Sevenera, and the American lady (Ruth) who sold Masiform and Spockanlia. I commented at the time that there seemed to be a lot of money around at this convention, and the dealers all did very well.... This convention also went some way to drawing SF fandom and Trek fandom closer together; the SF fans at the time were very derogatory about Trek conventions, but a bunch of them turned up because they were running an Eastercon at the same hotel shortly afterwards and wanted to see the hotel 'in action' so that they could iron out any faults they found They didn't find any, but they did have a great time. A definite case of IDIC in action! [3]