"The Annual Comic-Book Fan-Fiction Awards, an open fic/writer popularity vote first instituted in early 1998 -- voting is conducted in December/January (watch this site and others) and the results are presented in a rather unique form in March (hopefully!). The virtual award taken home by winners is called the Creative License."[1]

"The CBFFA Awards (Comic Book Fan Fiction Awards) were organized by Kelly "Kielle" Newcomb and were voted on by the entire fanfic community. It was the first, and to date remains the most significant and all-encompassing award ceremony for comic book fan fiction. The awards were separated by categories, each category awarding a winner, second place and third place."[2]

The CBFFAs began in December 1997[3], created by Kielle and hosted on her website CFAN, although there was discussion of a comics fanfiction award on acff as early as 1995[4]. The awards were created to recognise the best in comics fanfiction and honour the "classics" of fanfic through the Hall of Fame awards. The awards covered fanfic that was posted the previous year. Larger works that had sections posted over multiple years were therefore eligible for awards over multiple years. Voting was anonymous, with the award runner tallying votes and removing those which were blank or named a fic in the wrong category, or which had repeated votes from the same ISPs, to avoid "ballot stuffing".

The results were presented during a round robin "award ceremony" set in the Subreality Cafe. Each award category was handled by a different writer, who wrote a short segment of the overall award ceremony. The awards were "presented" by fanwriters and fictives and the final stories were posted on either Alt.comics.fanfiction or the Outside The Lines mailing list, depending on the year. The Comic Fan-Fiction Authors' Network hosted five of the events, including the awards ceremonies/stories, the tallies and the winners.

The CBFFA concept was created by and the inaugural awards were run by Kielle.

Best Mature (tie): "In The Midnight Hour," by Melissa Nolen

Best Excalibur: "Idylls of the Cat," by Luba Kmetyk

Best X-Men: "Devil's Due," by Laersyn

Most Improved Writer: Me

"Sometimes Even The Music Is Against You," by Denise Keppel

Hawk's Talon (for for Outstanding Contribution to Fan-Fic Proliferation)[5] 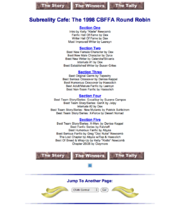 This year the awards were run again by Kielle.

Best Serious: "Maturity in B Minor," by Dyce

Best Humorous: "The Adventures of God," by Poi Lass and Kaylee

Best Series: "Idylls Of The Cat," by Luba Kmetyk

Best Generation X: "Maturity in B Minor," by Dyce

Best X-Men: "Crimes Of The Heart," by Indigo

Best Serious Crossover: "All My Mutants," by Denise Keppel

"Vertigo: No Way Up," by Kielle

This year the awards were run by Matt Nute.

Best Serious: "First, Do No Harm" by Poi Lass

Best GenX: "Maturity in B Minor," by Dyce

Best Other: "Til The Midnight Hour," by Indigo

Best Humorous Crossover: "The Midnighter Vs. Everyone," by Indigo and Redhawk

Writer Of The Year: Alicia McKenzie

"Idylls Of The Cat," by Luba Kmetyk

"Pale Reign Over Geshem," by Abyss

Note: There was no CBFFA Awards Show for the year 2000 and the Tally wasn't provided for archiving.

This year the awards were run by Dex Farkin.

Best Humorous Crossover: "The Getting Of Wisdom" by Amanda Sichter

Best Original Character: Annie from Dyce's "The Godless Among Them" and "Slavery, Deliverance, And Faith"

Best Other Mutants Story/Series(tie): The Personal Religion series by WGSarah & The Song Title Series by Dyce-Elihara

Writer Of The Year: DarkMark

"Maturity in B Minor" by Dyce

"Drawn To The Lodestone Rock" by Dandelion

This year the awards were run by Dex Farkin.

Best Movieverse: "Land of Blood And Honey," by Dyce

Best Gotham: "In The Blood," by Dr. Benway

Best DC/Vertigo: "A Day No Pigs Would Die," by Dannell Lites

Best Other: "The Last Fast Blast Of The Bouncing Beatnik," by DarkMark (Astro City)

Best Series: "Growing Up A Superhero," by JB McDragon

Best Humorous: "Hooray, Hooray, The TO Has Gone Away," by Alicia McKenzie

Best Serious (tie): "The Sum Of Zero," by Dex; "Suffer The Children," by Rossi; "Climb The Wind," by Minisinoo

"'Til Christmas," by Kaylee

Writer of The Year: Dex and Minisinoo

No voting tally was provided for archiving.

This year's awards were run by Mike Smith and Matt Nute. The categories were amended to reflect changes in the fandom. No record of the winners exists, but the nominations (taken from the top six nominations per each category) were as follows. Winners noted where the information is available.

"In The Vernacular: Jailbait" by Skittlekicks

"Too Much of a Good Thing" by Stormfreak - Winner[6]

"As You Were" by Alicia McKenzie

"In the Eye of the Storm" by Wolverine6Claws

"The Karma Downs" by Cherry Ice

"Next Best Thing" by Jim Smith

"SCPD: The Case of the Comatose Writer" by Rossi & Dex

"An Accidental Interception of Fate" by Minisinoo - Winner[7]

"Earth, Wind and Fire" by Wolverine6Claws

"Eros on Trial" by Minisinoo

"Walkin' On the Wild Side" by Wolverine6Claws

"Earth, Wind and Fire" by Wolverine6Claws

"In a Hotel Six on Highway Five, After the Forty-Nines" by Minisinoo - Winner[7]

"Kiss of the Vampire" by Silverblade

"Outside My Window" by Stormfreak - Winner[6]

"The River and the Highway" by Twinkylady

"Walkin' On the Wild Side" by Wolverine6Claws

"Everyone Says I Love You" by Mice

"The Pantheon Series" by Alicia McKenzie

"Special: The Genesis of Cyclops" by Minisinoo - Winner[7]

"Wings and Dreams" by Jaya Mitai

"The Inhuman Condition" by Mike Smith

"Jack and the Yamainu" by Ciro

"The Karma Downs" by Cherry Ice

"Outside My Window" by Stormfreak

"An Accidental Interception of Fate" by Minisinoo

"The Evolution of Jubilee" by Mara Greengrass

"Splinter Me Filter" by Diebin

"The Everything Engine" [MV1: All God's Children #50] by Mark Bosquet

"A Prize for Three Empires" by DarkMark

"Hanging the Drapes" by Persephone Kore

"The Inhuman Condition" by Mike Smith

"One Ring" by Dr. Benway

"The Dark Passion of Cheerleader Dildonics" by Simon Field (Transmetropolitan)

"Death and the Art of Pyramid Selling" by Rossi (Hellblazer)

"God Slave, the Queen" by Dex (The Invisibles)

"Heels Britannia" by Dex (The Invisibles/Hellblazer)

"Muscle and Bone and Feathers" by Gunbunny (The Authority)

"Ye May Yet Believe" by Suzene Campos (Fables)

"Down in the Mouth" by Liz Barr (Archie Comics)

"A Summer of Wendy" by DarkMark

"these walls are paper thin" by Liberty Ginger (Dilbert)

Dane Summers from "As You Were" by Alicia McKenzie

Eve Francis from "All About Eve" by Alara Rogers

Peggy Summers from the "Pegasus Flight" Series by Andrea

Writer Of the Year:

"The Body Snatcher" by Alara Rogers

"Climb the Wind" by Minisinoo - Winner[7]

"Ghosts of the Past" by Morgana

"In the Eye of the Storm" by Wolverine6Claws

"Losing You to Those Before" by Court

"Next Best Thing" by Jim Smith

"The Sum of Zero" by Dex

The awards ceremony was posted to Outside The Lines, however it does not appear to have been archived. The following fragment was found on a personal hard-drive.

Out of the 2002 CBFFAs came a certain amount of controversy. Attempts to incorporate the new movieverse X-Men fanfiction fandom into the awards were seen as too little, too late[9] and it was felt[10] that the fandom had become too fractured to justify a global set of awards. There was additional drama in the form of accusations of ballot stuffing - Dex Farkin had mentioned the need to remove a number of votes stemming from the same ISP which pertained to a number of fics by one particular nominee, which was then picked up by members of comics fandom as evidence of a deliberate attempt to skew the vote and which was responded to heatedly by the individual and their friends. A message board was set up in October 2002 to discuss the future of the awards[11] - unfortunately, no record of that discussion was captured by the Wayback Machine, but it seems the vote was to continue the awards into 2003, this time with Mike Smith at the helm and Matt Nute providing technical support.

Nominations for the 2003 CBFFAs opened around February 2003, based on several "fic I wrote that's eligible" posts from fanwriters on Livejournal at that time[12] [13] and an announcement on The Scratching Post[14] message board; with the voting being hosted on Fanficnetwork.com[15], closing on May 7, 2003. The awards ceremony was posted to Outside The Lines and X-Fiction beginning May 20, 2003[8], however it does not appear to have been saved outside of these mailing lists and is inaccessible.

These were the last CBFFAs to be awarded.