From Fanlore
(Redirected from NSYNC)
Jump to: navigation, search

'N Sync is a boyband composed of Joey Fatone, Chris Kirkpatrick, JC Chasez, Justin Timberlake and Lance Bass. (The name is also often spelled "★NSYNC"; the group changed the notation of their name partway through their career.) They and Backstreet Boys were the most popular groups in popslash fandom. 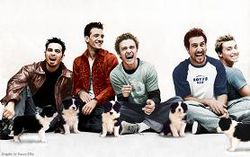