Escapade 2010 (held February 26–28, 2010) was the 20th anniversary of this convention. It was advertised as, "...a celebration of our history, an opportunity to reestablish old friendships, and a time to create new ones." [1]

It was held at the Crowne Plaza Hotel in Ventura.[2] It was attended by around 135 people.

Saturday night fan entertainment included the resurrection of the Wheel of Fandom created by Ken D about ten years ago. The game was won by Denise Raymond, who solved the puzzle phrase, "Curse your sudden but inevitable betrayal." She won a free drink coupon for the hotel bar. The other contestants dib and daffy received the consolation prize of all the soda you can drink from the con suite.

The Gulf War (the first one) had started not long before the first Escapade. We wondered whether it was okay to be attending a slash con and having fun when our country was at war. The weather was beautiful, Wiseguy was the hot new fandom, Pros was the huge fandom, and we embarrassed professional strippers. (Ask anybody; it's true.)

Over the decades Escapade has grown and changed, and added wonderful staff members like Ken and Misti, but at its heart we hope it has stayed the same in one simple way: it's still your event, and it will still be what you help us make of it. It was once "purposely controversial," but now when non-con isn't risque and one of the hottest fandoms features incest, we can't even imagine what would push that envelope anymore. So perhaps we're a bit stodgy in our old age, a bit more familiar with each other and with the whole concept of flying or driving minutes or days to get to a party and see our friends. Perhaps the constant virtual access to friends, fic, and fandom has diluted the thrill of seeing people live a few times a year.

And perhaps those memories that have been built up and carried on to other cons we've allowed, nay encouraged, to utilize our formats and our experience- Context, Vividcon, Connections and more-have made even the stodgy and familiar welcome. We know we look forward to every year, and we look back with more pleasure and fondness as each year goes by.

We've lost people along the way, to other pressing matters of life or to death itself. We miss them. We remember them with love or anger, sadness or dismay, and we note their absence. We've gained people along the way who continue to interact more closely with the media and its producers who know us as a community better all the time. Some of those people wonder what the hush-hush is all about since Harlequin Romance now sells m/m romance novels to middle America.

We turned down a request from a reporter for a press pass so he could write an article about this convention and sell it to the Los Angeles Times. Maybe next year, if you all like the idea, we'll say "yes" if he asks again, and we'll share our history farther and wider, and see what comes of that. Hey! At the very least, allowing the press would be something controversial!

There were three tracks of programming, including: General/Meta panels: 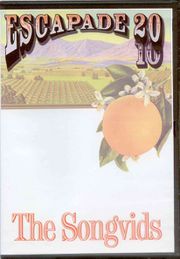 The vid show is published for the membership on dvd. This year's DVD collection was the fanciest yet, a gorgeous design by feochadn based around California peaches.

To link to this vid show, use: Escapade/Escapade_2010#Vid_Show.