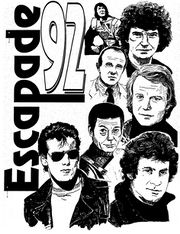 2:00 -- "Coming of Age: Are our heroes men or boys," led by Marion [the description of this panel in the program book appears to be a typo and prints the description regarding holodecks from last year]

3:00 -- Minipanels, "a brief introduction to some neat series you might have overlooked"

5:00 -- gather at Ming Wathne's house (1.5 miles away) for an introduction to the Fanzine Library, "This continuation of the Zine Library started in 1977, has been reopened in Santa Barbara... Orig SW, it has been expanded to include all fandoms. Ming Wathne, the librarian, will have refreshments and share with you what the library is, how it works, how editors can submit their out-of-print zines and how you can borrow them!"

7:00 -- Con Suite, M. Fae Glasgow reading, led by Nancy. "Reading of a work in progress by the shy and retiring Glaswegian's editor."

midnight: bowling, "All our heroes do it! Let's make fools of ourselves at the local alley. Meet in the Con Suite to car pool. Be there or be square!"

10:00 -- "Everything you always wanted to know about K/S but were afraid to ask," led by Carol, "zines, the fandom, trends in stories, a historical perspective, you name it, you've got it."

11:00 -- Alternate Universes, led by Joanne, "Are our characters really the same outside of the environment that created them? Or is it a case of 'only the names remain the same?' Are some characters easier to shift to an AU? What about 'hystericals'?"

1:00 -- Minipanels, "a brief introduction to some neat series you might have overlooked"

Cuckoo Waltz, led by Kandy, "Is there more to this show than a baby-faced Lewis Collins? Does there need to be?"
Anime, led by Barbara, comic books and animation from Japan, "The prettiest guys you've ever seen."
Wiseguy, led by (Charlotte Hill), "Great writing, sexy guys, one [oh]-so-sexy guy with round wire glasses, what's all the fuss here? Come and find out!"

2:00 -- Fandom 101, led by (Charlotte Hill) and (Megan Kent), "What does every new fan need to know? Jargon, perspective, history. Come if you're neo, or if you don't know what that means. Come if you're not and you have something you want to share."

3:00 -- "Professionals: The Convention in Fannish Writing," led by Lily, Shoshanna, and Kathy, "Who said that Doyle was a street kid? Or that Bodie grew up on the Liverpool docks? How do we know Murphy's call sign? How does Fan Canon get developed and reinforced?"

4:00 -- "Lesbian Slash," led by Shoshanna and Barbara, "Why does 'slash' apply only to male/male relationships? There has been some interest in woman/woman stories. Why are they attractive (or not)? Do you want to see them in your zines?"

12:00 -- "Romance, Fantasy and Slash," led by Meg, Barbara and Kathy, "A discussion of their similarities, differences, and attractions."

1:00 -- "Zine Quality: Are you getting what you pay for?," led by Kathy, (Megan Kent), and (Charlotte Hill), "What constitutes quality in a zine? Page count? Cover art? Quality of writing? Where are the editors spending their time and efforts? What would you like to see?"

Also shown (but not on the con tape)

In issue #15 of The Zine Scene the editor reports:

"First, a report on Escapade II: It was the usual fun time we've come to expect from [the convention organizers]. Good work, guys! The Holiday Inn staff was charming and helpful, the Santa Barbara (okay, Goleta) setting was as beautiful as usual, even with the rain. We even managed to get home 24 hours ahead of the Ventura flash flood. You can't ask for more than that, even though it was a little bizarre to have flash floods in the middle of a drought ? (Only In California)."