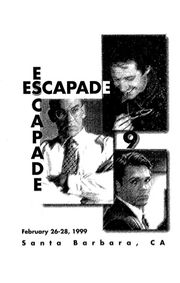 cover of the 1999 program book

Programming -- A Peek into the Process: 130 Topics Narrowed Down to 31

From the first Progress Report:

ESCAPADE's scheduling is generated entirely from the feedback of convention attendees, ensuring that ESCAPADE is YOUR convention. Interest is determined by ballot system, and you can expect to receive your ballot with Progress Report #2, which will be mailed to you in early December. To generate a comprehensive ballot, however, we need to hear from you about what panels, topics and suggestions you have, and especially which panels you're willing to chair. Please take the time to let us know what you'd like to see at ESCAPADE 9. We are proud of ESCAPADE's reputation for having a wonderful selection of programming, and we want to keep offering you the best in controversial, entertaining and educational panels.

Panels already volunteered for the ballot include:

From the second Progress Report:

Yes, this year we've got a hot and heavy selection to choose from (over 130 topics nominated for 31 spots); panels guaranteed to keep you hopping with excitement, even if you only have the attention span of a gerbil. The following panels and workshops have made the prelminary cut. There may be changes between now and the convention, but you can expect to see most of the following:

Sad that your favorite panel didn't make this list? Feel free to sign up for "Alternate Programming" time. You can hold your own panels, show videos, and generally brainwash your unsuspecting friends. Drop us a note, or sign up in the con suite when you register." [2]

"Here is the preliminary schedule for the convention.

We are taking pre-convention reservations for Alternate Programming/Video. The rule is, only one hour per person/group, until the time is filled. Hours will be reserved on a first-come-first served basis. To reserve an hour, drop us a line at escapade09@xxxx.com, and let us know what you'll be doing/showing, so we can post it on the revised schedule (due up this weekend).

Please let us know if you need a text version of the schedule, and we'll make one. 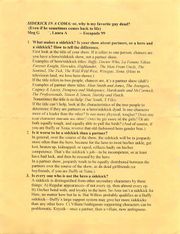 panel notes from 'Sidekick in a Coma, page 1, click to read 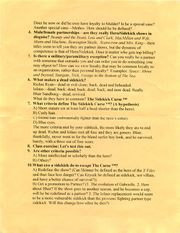 panel notes from 'Sidekick in a Coma, page 2, click to read

According to a progress report, the con skit was "a play Lezlie had written about the fractionalization of slash fandom."

From the first Progress Report: "In attempt to reduce the recent epidemics of fanny-fatigue, here's how the video shows will break down this year. Saturday night's show will be reserved for vids debuting at ESCAPADE (yes, we recognize it could be very short). On the other hand (since we, unlike some people, have another hand), we have great faith in our members' creative output. On Friday night, we'll be showing vids that are new since last ESCAPADE, but that have been shown at another convention this year.

ESCAPADE's video show will be displayed on a big-screen TV with an external stereo system, providing the best in fan entertainment with great visibility and audio quality. Please let us know how many vids you plan to bring." [3]

Note: Originally, copies of Escapade vid shows were mastered, duplicated, and mailed directly to convention attendees on behalf of the concom by staff member Kandy Fong. At one point, she supplied some of these high-quality tapes to Mysti Frank to sell at cons Kandy herself wasn't attending, but after learning that Mysti had inflated the prices and kept the profits, Kandy rescinded any permission for Mysti to copy, distribute, sell, or in any way be associated with Escapade con tapes.

In April 2014, it was discovered that Mysti had been making and selling lower-quality tape copies without the concom's or vidders' knowledge or permission, and also without including any of the vidder credits that Kandy had originally provided. Concom member Charlotte Hill then contacted Mysti and asked her to stop distributing tapes in order to protect the quality and reputation of both the vidders and the vid show.

The original information added to this page offering tapes for sale via Mysti's website is below:

The vid show was released on a songvid VHS tape and sold by Agent With Style. From the description: "The wonderful song vids shown at the Escapade convention in Santa Barbara, CA, each year are collected and presented here for your enjoyment through the auspices of Kandy Fong. Capturing every fandom you could think of -- and many you couldn't! -- these tapes are amazing and not to be missed! Available only in VHS tape."

I got sucked into slash fandom in '92, when Sandy brought home a set of Blake's 7 tapes. I fell hard for the dark universe, and the flawed, doomed, noble characters. I spent money like water on zines, tapes, travel, TV, and the internet. I started going to cons in '93. I'm a newbie, I don't have the experience of fandoms, cons, and fans that so many of my friends do, so how the heck did I get asked to be on Friday's History of Slash Fandom?

But the panel was a blast; you can't ask for better co-presenters than Lezlie and Cynthia and Pam. We tried to diagram the genealogical lineage (eg: "out of Star Trek, via Starsky & Hutch"), which actually stays pretty clear in the '70s, starts drifting in the '80s, and as Lezlie puts it, turns into 'drive-by' fandoms in the '90s. Stories were told, ancient-in-fandom fans were pointed out and asked for input, tiny fandoms were remembered. Something that I thought was quite interesting, was the revival - or even the birth, in some cases - of fandoms for shows long dead, due to cable, syndication, and VCRs. Cynthia brought a tape from a slash con from 1984(?), of a play Lezlie had written about the fractionalization of slash fandom (?!) - which was hilarious, and oh-so-topical. It ended with the classic 'Dancing Penis's', and the hot stuffy room was filled with women laughing so hard they could hardly breathe.

Now I wish I'd taken notes; that kind of stuff fascinates me. How *did* we get to where we are today? How much of it is due to one person here, one person there, publishing a zine, sharing tapes? So often certain 'fandoms' can be traced to specific individuals, women you might meet next con, who are still active, or at least actively lurking. How much of it is due to the Zeitgeist?

Well, the Zeitgeist and I were *finally* in accord at Escapade99. In the past, I attended slash "Pros" conventions, or Zcon "cop'n'spy'n'buddies" conventions, when all I wanted to talk about was Blake's 7, and B/A. I would spend most of my time searching in the dealer's rooms for B7 zines and art, or reading something I'd just bought, or tagging along with friends who spoke slash, but not necessarily B7. I volunteered to lead panels just so I could talk with (hopefully) like-minded fans for just an hour - and in B7, it's rare to get to talk B/A, believe me. Alternate pairings in B7 have very vocal supporters. I went to slash cons, actor cons, media cons, even SF cons, all to quietly search out and find B7 fans. I could always find the slash fans, eventually. But even at the B7 cons I attended, there was little B/A spoken.

At Escapade99, I had the best time I've ever had at *any* con. Slash fans and my current obsession converged. I'm pretty sure it will never happen again, but I intend to bask in the glow for a long time to come.

What little I remember now: Noticing that for the first time, there was no "what has the net done to fandom" panel, and finding that it was hidden under the title of (duh) Is there a future in print zines? The answer was a resounding 'yes', because 'Futures Without End I and II' have sold 2-3 times as many copies as the editors originally expected. Theory is that there is a market for nice layout and edited stories printed and bound ... as well as a perception among net writers that being 'published' is cool.

Songvid Aesthetics was interesting - they talked about theme, music choice, color - but not story. The other panels that I remember - Themes of Atonement in HL, and Canon vs Fanon, were HL specific, and a great deal of fun. I love being in a room full of passionate people, who can discuss a series in the same level of detail or better, as I can. I don't care if they are writers or not, just as long as they have paid attention to the characters and the events of the series.

The art show, which I worked, was rather sparse - unusually so, since this is a show that takes resale pieces alongside. Perhaps next year there will be more 'computer' generated art, since that seems to be the trend right now. I haven't decided if it is good or bad - most fan artists work from stills and clips, and I've seen a couple of pieces of computer art that don't set my teeth on edge, and some of Suzi's do. YMMV.

I missed the Friday vid show, in exchange for discussing the class that Laura A is teaching..... Saturday's show was long; the standout vids were Gwyneth's No Way Out of Here, and the visciously XF song, something like We Really Care, by Carol S. The filk songs were great, as usual, and then I went to bed.

I actually went swimming one morning - it felt great! The nights got a little cool, but hey, I can deal with that, especially since the sky was deep, deep blue, glowing with the full moon and the bright stars. Sunday morning breakfast was fabulous, and the songvid critique as as gentle as Sandy's headache would allow. John the Java man did an adequate business all weekend, providing us morning espresso. And this year there were coffeepots in the rooms, so I could happily sip coffee all day, all night long.

Wickedwords asked me on Monday what the highlight of the con was for me, and I had to answer that I'd been at a pretty nice high since we got off the plane. Some of that was due to the sunshine (Seattle rain usually doesn't get me down, but this year for some reason it has). But mostly, for 6 days straight, I could actually be immersed in animated discussion of the Highlander universe and Duncan/Methos, with other like-minded folk, talking for hours, analyzing this aspect or that theme or this character or that relationship in HL. I've actually never felt anything like this before at a con, even my first slash con (Zcon '93), where I felt I'd finally found home. I generally don't do 'happy', contentment is the most I strive for, but I think I hit happy this year.

This year serendipity graced me, and I feasted.[4]