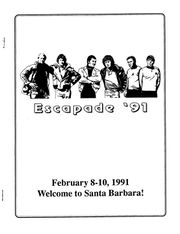 The location was Santa Barbara, CA.

In the program book, there was an ad for Kinkos which was open 24 hours and provided "1/2 price copies for Escapade Members."

2:00 -- Star Trek: The Next Generation, "Holodeck: The Drug of the 25th Century" (Given the opportunity to have all wishes fulfilled, why would anyone ever come out?... how many times has it threatened the ship's existence?)

3:00—Minipanels: A brief introduction to some neat series you might have overlooked.

5:00—gather at Ming Wathne's house (1.5 miles away) for an introduction to the Fanzine Library, "This continuation of the Zine Library started in 1977, has been reopened in Santa Barbara... Orig SW, it has been expanded to include all fandoms. Ming Wathne, the librarian, will have refreshments and share with you what the library is, how it works, how editors can submit their out-of-print zines and how you can borrow them!"

7:00 -- Con Suite, M. Fae Glasgow reading, led by Nancy. "Reading of a work in progress by the shy and retiring Glaswegian's editor. Title of the work is Own Goal.[1]"

10:00—Editing, led by Nancy and Joan, "The sign of a good director is that he makes his actors look talented. What makes a good editor? What should communication between editors and authors look like?"

11:00—Reality vs. Fantasy in Fan Writing, led by Marion. "How far, as writers, are we willing to bring reality into our fantasy worlds? Fantasy into the real world? Which realities? Medical reality? Social and political reality? What about reality in gay relationships?

12:00 -- Minipanels: A brief introduction to some neat series you might have overlooked.

Wiseguy, led by (Megan Kent), "Always at the top of the critics' list and at the bottom of the ratings. The show has men undercover, in leather, and great scripts."
Anime, led by Barbara, comic books and animation from Japan, "The prettiest guys you've ever seen."
Twin Peaks, led by Laurel, "Weirdness rises to new heights of chic."
ENG, led by Joanne and Jackie, "New, Canadian, and slick. Life in a high-tech newsroom with characters you'd like to know."

1:00 -- Climbing Fandom's Social Ladder, or A Clash of Values, led by (Megan Kent) and (Charlotte Hill), "What does it mean to be a Big Name Fan (BNF)? Why are there cliques and in-groups in our small selection of society's weirdos? What is acceptable fannish behaviour and how is it learned?"

2:00 -- Star Trek, led by Robyn and Jeanne, "K/S fiction then and now. How are the stories changing? Were they really better back then or do we tend to forget the old dogs?"

4:00—Quality Control in Zine Publication/Economics of Fandom, led by (Charlotte Hill), (Megan Kent), and Robyn, "Who is making money in fandom? Should they be? How accountable are fans? Editors? Artists? Have you ever written an LOC?"

5:00 -- Blake's 7, led by Kathy and Gail, "Is our interest in this 'dark' universe a reflection of our fascination with the macabre in life?"

1:00 -- Professionals, led by Lily, "Are stories based on other roles played by Lewis Collins or Martin Shaw (i.e. Master of the Revels and Griffin [2]) Professionals stories? Is this a fandom of characters or actors?"

When I was making my decision to attend Escapade I hesitated for I was not sure if the con would attract any K/S people. To my surprise everyone was there from Cali Con. In the dealer's room K/S zines were predominate. Who could ask for anything more? Megan Kent and Charlotte Hill did a wonderful job, they were everywhere at once. The panels were all right on target addressing important issues. However the attendance at the K/S panel was very light; I am confused as to why. The temperatures were in the high 70's, the hotel and the pool were very nice. The Saturday night entertainment was male strippers, wow! Everyone went wild. We embarrassed professional strippers! There is going to be a Escapade 92, and I recommend it to all of you K/S fans who missed it this year.[3]

"Classic" songtapes were shown at 9:00 on Friday.