From the program book: "MoreVids. Years ago (afterVividcon 3, maybe?) someone casually said,"Before vividcon, Escapade was the only game in town." We'd like to honor that vid-intensive past by introducing some more songvid programming, starting with the Escapade Vid Show Retrospective. The retrospective will include vids from Escapade's first 10 years, including, well, a literal "Escapade" vid.. Kandy Fong, who managed the vid show for many years, has compiled the retrospective which will air before the party, on a big screen but with a drinking game and open door policy. (Repeat showing may be scheduled in alt programming, if enough people would like to watch them again/more closely.)"

From the program book: "We'd like to think that eventually, less than half of our conventions will have been presented during a war (Escapade I: Gulf I). Escapades 2002-now: Gulf II). Seriously, this is getting weird. That said, anyone born at the first Escapade is old enough to toast to auld lang syne, and to wonder why the hell we still drive, fly, and train across the country when we "see" each other on the web most days.The answer is only found in the hotel halls, and the function spaces, and the fact that laughter (and bitching) isn't all virtual. Cons can have their own lives, and we like to think Escapade does, too: crochety at times, amusing at others, brilliantly intellectual before the real drinking begins, joyful always. At its heart, Escapade continues to be what it was born as: your convention. Your programming ideas, your panel chairing, your songvids, your stories. Your laughter This year more than even we're feeling old and phat and happy, and we hope you'll share that pleasure with us. And if along the way, you find something really cool to fight about in a panel room, LET US KNOW! We want to be there!"

The program guide can be found here. 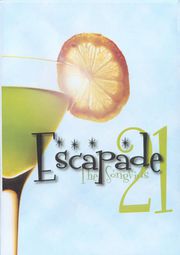 Three bonus vids on the DVD: