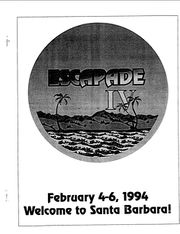 cover of the 1994 program book

The Saturday Night Male Strippers made an appearance again.

The art show was small but with very nice pieces. Lots of K/S by a then 'up and coming illustrator' named Shelley Butler and several Lovett Wiseguy pieces.

There was a three-hour turkey read of fanfiction in a private room party by Virgule-L. From the program book: "Those insane girls from the Pacific Northwest will be having a party in their room on Saturday night. Look for signs in the Con Suite to direct you there. They promise a good time for all, and plenty of 'Sex in the Rain'."

In 1994, Sandy Herrold and Charlotte Hill posted joint panel notes on the "Technology in Fandom Pane." to the Virgule-L mailing list. They are reposted here with permission:

"The technology in fandom panel actually jumped around quite a bit (I definitely recall hearing the words "segue from hell" more than once ((usually from me--Sandy)), and it included several things that people can now do in-home that they couldn't do five years ago: cutting and splicing songs on Macintosh computers (to remove inappropriate choruses, verses, or the word "girl"); the soon-to-be-easier ability to select different people from different clips and combine them onto a new background (also for songtapes); printing vhs video frames directly to computer screens, printers and/or color copiers (for fun); and zines and/or libraries on disk. Most of the new technology possibilities were followed by comments that the actual work we can do is illegal (i.e. "sampling" a song by changing it or cutting pieces of it). Which comments were followed by the statements that seventeen years ago, writing and publishing a slash fanzine was illegal.... Regarding the list proper, Sandy announced the list's existence and invited people to talk to her if they were interested in joining. I don't know how much response she got. ((This is Sandy--I actually got none specifically from the panels, but a few people who are good friends (or relatives like N's sister) of people already on the list, talked to me at different times throughout the con about getting accounts or modems, and telling me they wanted to--probably 4 or 5 in all.))"

The songvide tape for that year ran 1 hour 31 minutes.

Nicole V. wrote and posted a convention report to the Virgule-L mailing list. It is reposted here with permission:

"And so yet another month has passed. I've wanted, nay, I've promised to write something about Escapade panels. So I am, instead of doing all the homework I've put off for 8 weeks.

The odyssey began: Blackbird and I flew into LA and rented a car Thursday evening. We drove out to Goleta after visiting with Agnes T. and dozens of kaleidoscopes in Beverly Hills.

The Alamo commercial is right: LA feels familiar because so much of it shows up in the media (maybe Vancouver, BC, will someday be as familiar!). Rush hour traffic in the dark and rain, and a poorly kept road. But Blackbird's lived in New York, and it didn't faze her. We shared accommodations with Snady, Rachel Sabotini, and Heather Gladney. Great group! The light sleepers have discovered comfortable earplugs and thus slept well. Thank gohd Joan Martin found the espresso place: withdrawal is not a pretty sight!

Shoshanna let me work in the art show - which had an amazing amount of StarDreck art, beautiful pieces. Very few pieces went to auction. A lovely Suzi Lovett original color, of a mostly-clothed Roger Lococco, went to DJ Driscoll, a well-known despiser of Wiseguy, but who really loves William Russ. There was vicious rumour that she bought it to burn it, but rest assured, the picture is ensconced over her fireplace (I saw it there last weekend).

I didn't get to as many panels as I wanted (so what else is new), but the following is what I remember from those I did attend. Or 'co-chair'. Misstatements, opinion and false memories are all my own; if you were there, your mileage may have varied. (I do remember that I wished I'd made the Fanfeuds panel: they named names, some of whom were in the room. And one of my abiding areas of curiosity and research is the B7 fan war.)

Is B7 a Dying Fandom? I came in late, but this was really a discussion on why are there fewer B7 stories being written? No comparison was made to story quantity in other fandoms, just to B7 then-and-now. No conclusions but a couple of ideas that emerged: either it's too hard, or not hard enough. The universe is a complex one, with several possible relationships between characters who are not easily described. Perhaps some writers therefore find it more difficult to write in. Writing within the story line is a challenge; OTOH, there may be less need to invent events since the series provides really juicy ones to explore, thereby making writing less of a challenge, or at perhaps less interesting, especially for the AUers. Those in attendance, tho, were adamant in their devotion. As M. Fae said, "I'm not finished with these characters yet!" And a Good Thing, too.

Men in Slash - again I was late (sitting in the bar, probably, chatting, listening to Spanish language TV in the background while the staff ate lunch, and did not serve us. Well, the bar door was open, but the bar was not). This panel was very well attended, all chairs were in use, and standing room only was available. About all I recall readily is that the two Men in Question, Lynn and Henry Jenkins, disagree about a lot, amiably, eloquently and often. (One question I found to be ludicrous: Do men *really* have feelings? asked with all seriousness by Pat Patera of the infamous Checkers. No, she wasn't joking. Yeah, Pat, men only have emotions in slash.) I left the crowded circle and took my place at the Art Show desk.

Slash and Technology: we talked for an hour and a half, and could have happily gone on. Discussion roved from this list through copywrite (music, video, word, creative) to propagation. Seems multimedia equipment makers are very interested in songvids; reports are that pros are always blown away by what fans do with simple VCRs. The range of the Internet is always amazing, and the access points are multiplying like, like packets in flood routing (that's a network joke. I'm supposed to be studying right now). Easy desktop publishing and cheaper repro drive up zine quality and drive down costs. For example, Avon Calling III has several lovely drawings, and a color xerox, as well as nice layout. $20. Another publisher is contemplating similar content, for around $10.) BTW, why hasn't the common Russian term 'samizdat' gotten into general use in fandom? It means self-published, and is how most subversive Soviet literature was distributed for 70 years.

Rachel Sabotini and I held a conversation with about 5 other folk on TV of the 60's and its attractions. We were supposed to talk about Outdumbing James Bond, but the buddy shows that people remember became the topic. I was surprised by the fervor of a couple of older (well, my age or a little older) women who found that "real good guys vs. real bad guys" was what they missed most: no ambiguity about right and wrong, and the hero always wins. (I don't miss it at all. But then, I like B7.) Discussion was enhanced by the songvids we'd seen the night before; there was shock as scenes from Voyage to the Bottom of the Sea, narrated by schmaltzy love songs, were reinterpreted with the slash filters. Ah, that pesky subtext!

I had a wonderful time, and was really glad to meet and meet up with so many that I already knew virtually: Joan Martin, Morgan Dawn, TDO, Lynn C., Charlotte Hill and Megan Kent, (forgive me if I waffle here, but my brain is disconnecting.) It was over far too fast, and the flight home was far too long. Now how can I get to Media West ... Detroit's expensive, maybe hitch from Chicago, huh? Oh, I have to pay to get *to* Chicago, too? Why can't I just be patient and wait for Virgule? It's in Seattle, after all. Why, indeed? 'Cause I miss ya'll."

A mono-K/S fan who had written a critical convention report for Escapade 1993, offers up a (slightly) more mellow report for 1994 that, once again seems to have little to do with the convention itself:

”Well guys, I went to Escapade this year and the second time is lots better than the first! A number of reasons: I know a lot more people now after more than a year in fandom. Also, there were more K/Sers there. And I'm more familiar with multi-media.

That doesn't mean I like it any better. I still can't understand for the life of me, IDIC notwithstanding and all that, why anyone would prefer two ordinary men - (take your pick: there are countless pairings) over Kirk and Spock. I mean look what K/S is - not just two men (excuse the expression, but this is really where it's at for the most part) fucking, but a whole range of experiences that we draw upon: spiritual, emotional, intellectual, and yes, sexual. And from what I've seen, heard and read - the biggest draw to any other slash fandom (why do you think they call it "slash"?) is sex between the two men. Okay, romance is somewhere in there, but not by much.

I am not expressing this to put anyone's taste in zines or TV or fandom down. Honestly, some of my best friends are (gag) Pros fans, but I can see so much in K/S that I don't see in anything else, that it makes me want to explore why others leave K/S to join something else. To my knowledge, K/S was the first fandom of its type and evidently set the precedent for all the rest that followed. But why would anyone want to give up all the extraordinary beauty, intelligence, feeling and depth of K/S for two ordinary men fucking? Anyway [at the convention] lots of people asked, cajoled, wondered and hoped that I'd draw a nice Bodie and Doyle picture. Just because I ran screaming into the night is no reason to think the thought would bother me.”[2]

From a fan, this one with much less detail:

Escapade was quite calm and serene this year--almost sleepy, in fact. Not a single crisis du jour to be seen. But an enjoyable break, nevertheless. Santa Barbara, as always, was beautiful, and it was good to see everyone that I only see once a year.[3]