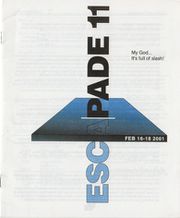 [Introduction]: We have returned to our roots in the heady resort atmosphere of the Santa Barbara Holiday Inn (Goleta); some of you will breath a sigh of nostalgic joy at its familiar family feel, while others may be experiencing our home town ambiance for the first time. Either way, prepare to enjoy yourselves. Prepare to enjoy the kind of spirited and heated debate that can thrive only in a truly secure community of friends. Prepare to enjoy the tiny surprises, the friends old and new, and the extra space as we spill over into our neighboring hotel, the South Coast Inn. If ESCAPADE is new to you, you may find it unique; the special features that define ESCAPADE can sometimes be disconcerting. Please feel free to check in with any convention committee member if you have a concern or opinion.... We thank you all for your support of a convention that now spans 11 years. It has been fun, educational, and oft-times wickedly sexy, and even today we recall the brush with the stripper-mafia with fondness and pride. Without you there would be none of those special memories. Without your support as panel leaders and volunteers there would be no ESCAPADE. Thank you.

[Charity: You Have a Choice]: This year there are three charities to choose from. One helps women find jobs. One helps women you know as they ride in the California AIDS Ride (ultimately this supporting people with HIV & AIDS). One supports a documentary film about fat women and how they're cooler, more worthy, tougher and more athletic than society would like to believe. See the back cover of your program book for information on the new charity choices, and consider which charity you want to support.

[Scholarship]: Thanks so much to all who participated, and a special thanks to those who gave above and beyond the call. Because of your generous contributions and support, we were able to fully fund Te and [Dorinda H], who will be attending ESCAPADE for the first time. We thank the following donors for their contributions: Futures Without End and [seven fan names redacted] and [one fan name redacted] for her assistance with travel arrangements. Your generosity is the very spirit of fandom.

From the online version, an intro:

The Escapade schedule reflects the contribution of all Escapade members who filled out ballot forms, as well as those who volunteered to be panelists, not to mention the hours of careful futzing and dinking by the con com required to fit everything in and not double-book any panelists. It is published here for your convenience and entertainment only!

Please remember that a great deal of work and alcohol went into the creation of this schedule, that two members of the con com were reduced to tears in the process of producing it, that it was posted under the influence of very strong antipsychotic drugs, and that neither of the cats upon whom it was tested have shown any adverse effects as of 2/6/01 -- though we are keeping a very close eye on them and are ready to rush them to a Centrally Located Fannish Tape Source should they begin to present dangerous symptoms.

By clicking below to access the preliminary schedule for Escapade, you are certifying that you will not whine or otherwise try to get us to revise what has taken hours of pain and tons of chocolate to construct. If you don't feel you can do this, please return to the main page amid the laughter and mockery of your peers, and arrive on Friday to be happily surprised by the schedule. (We'll know you by your excessive blinking and permanently unhinged jaws.)

General comments about the vid show: in 2001, Shoshanna posted the following commentary about the Escapade vid show to the Vidder mailing list.

(Ten years later, upon re-reading her comments, seen below, Shoshanna stated that the reactions to the Escapade vid show that year became part of the motivations behind the creation of Vividcon. (See the prehistory (and current events) of VividCon!, dated March 29, 2011).)

"Escapade is not only a great slash con, it's also a great vid con. Every year I look forward to one of the best-organized vid shows I've ever been to, often with some of the best vids I've ever seen, and virtually always with lots of the vidders there to talk with and listen to. This year was no exception. Herewith some comments on the vid show. (Comments on the vids follow [in the next message]; it was a very long post.)

Last year there were some problems with people talking and walking around during the vids. Considering that the Escapade vid show pauses for thirty seconds after every vid to allow people to write down comments if they wish, I maintain that unless someone's actually bolting for the door with both hands clamped over her mouth, there's nothing that can't wait three and a half minutes until the vid is over. This year Gywn, who is tall and imposing-looking, reminded people before each show that vidders and their work deserve the same respect that an author would who was doing a reading (I think they deserve more, since an author who noticed a disturbance in the Force -- sorry, in the audience -- could pause or repeat the line people had missed, but a vid show can't), and things were much better. A couple of people clambered into their toward-the-front seats during a vid, and I did hear some talking, but nothing near as intrusive as there was last year.

There's been some talk, both last year and this, that the Escapade vid show is "too het." I could not disagree more. As I said above, one of the attractions of the con for me is the great vid show, and I don't discriminate among slash, gen, and het vids, the way I do in fiction (I'm much less interested in reading het and gen fiction than in slash fiction). I'm just there to see *vids*. Both vidders and non-vidder viewers, in various groupings, have been talking since the con (and probably since before it) about whether a significant number of people (whatever that means) dislike seeing het vids in the show and, if so, whether anything should "be done" about it. My sense is (certainly my hope is) that nobody on the con com is going to ban or even officially discourage "het vids" (how could they even be defined? Is "I Want," discussed below, het or slash? What about "She's Moved On"? Why should a vid that is essentially a character study be labeled either slash or het?), any more than they (we; I run the art show, but I have no special input into vid policy) would try to ban panel topics that didn't deal directly with slash, of which there were plenty this year, as always. As far as I'm concerned, a character study is a study of a character, and if slash doesn't have characters, why bother with it? As for the occasional vid focusing tightly on a male/female relationship, hey, if someone doesn't like it, they can ignore it, just as they ignore a vid for a show they hate or using music they hate or whatever. It's only three and a half minutes long, after all. There were some proposals at the end-of-con brainstorming session to create, essentially, a "het ghetto," by showing all "het vids" at the end of the show, or at another time, or something. I hate that idea, and so do all the vidders I heard talk about it. I know that vidders know that the Escapade audience is particularly interested in slash topics; I'm confident that they bring or send the slash vids they have, and I'm glad to have the opportunity to see others as well.

Friday's show was older vids, and Saturday's was reserved for vids premiering at the con. There were thirty-four or thirty-five vids shown on Saturday (I think one that was on the list may have been cut at the last minute, but I can't remember), and the show, with intermission, lasted about three hours. The lights were kept low but on, so that they didn't have to be brought up after each vid and then lowered again, and I appreciated that. Some people seem to have found the room hot, but I was very comfy; I'm often cold, and tend to like warmth when I can get it. Three hours was a long time to sit, but come on, I've sat way longer than that watching fannish TV at times. It helped that the person sitting in front of me moved to another seat after the intermission, and me and the person next to me were able to put our feet up.

One underappreciated aspect of vid shows is the way in which the vids are arranged. Like stories in an anthology, vids in a show benefit from being well ordered. For vids, that means in a way that prevents jarring transitions between widely differing genres (comedy and tragedy, for instance), that doesn't allow the same few clips to be repeated over and over in successive vids, that doesn't clump too many vids of one fandom together, and doubtless does some other things that I don't even know about. Katharine (together with others?) did a terrific job. Bearing in mind technical limitations (tapes can't be cued back and forth during the show), the vid show was as well ordered as -- as -- as a really good Oblique Press anthology zine, and from me that's high praise, okay?

Here follow comments on some vids. I suck at remembering details sometimes, so I'm only commenting on ones I, well, remember well enough to comment on. My not mentioning a vid doesn't mean anything about whether I liked it or not, only about whether that particular brain cell has caught up on sleep yet. (There were some vids I didn't like. At first I thought maybe I should preface my comments with "this is just my own opinion," but now I've decided that if anyone actually thinks I speak for all of fandom, or indeed for anyone except myself, I should take advantage of it. So anyone who thinks I do, please assume that this message ends with the words "Also, please send me twenty bucks and copies of the episodes I'm missing of 'The Trials of Rosie O'Neill'" and act accordingly.)

Note: Originally, copies of Escapade vid shows were mastered, duplicated, and mailed directly to convention attendees on behalf of the concom by staff member Kandy Fong. At one point, she supplied some of these high-quality tapes to Mysti Frank to sell at cons Kandy herself wasn't attending, but after learning that Mysti had inflated the prices and kept the profits, Kandy rescinded any permission for Mysti to copy, distribute, sell, or in any way be associated with Escapade con tapes.

In April 2014, it was discovered that Mysti had been making and selling lower-quality tape copies without the concom's or vidders' knowledge or permission, and also without including any of the vidder credits that Kandy had originally provided. Concom member Charlotte Hill then contacted Mysti and asked her to stop distributing tapes in order to protect the quality and reputation of both the vidders and the vid show.

The original information added to this page offering tapes for sale via Mysti's website is below:

The vid show was released on a songvid VHS tape and sold by Agent With Style. From the description: "The wonderful song vids shown at the Escapade convention in Santa Barbara, CA, each year are collected and presented here for your enjoyment through the auspices of Kandy Fong. Capturing every fandom you could think of -- and many you couldn't! -- these tapes are amazing and not to be missed! Available only in VHS tape."