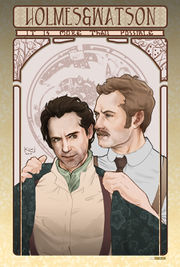 It is Probable, by Ponderosa121 (2010). Holmes/Watson fanart in Art Nouveau style.

Sherlock Holmes is a 2009 film adaption of Sherlock Holmes, directed by Guy Ritchie and starring Robert Downey Jr. and Jude Law. Together with its 2011 sequel, Sherlock Holmes: A Game of Shadows, it is known by fans as the Ritchieverse.

Although Sherlock Holmes has been frequently adapted for film and television for decades, a number of factors made this film a magnet for fannish interest: the unusual (for film, at least) characterization of Holmes, the involvement of actors Robert Downey Jr. and Jude Law, the steampunk aesthetic, and the homoerotic subtext between Holmes and Watson.

A sequel, Sherlock Holmes: A Game of Shadows, was released in December 2011. A third film in the series has reportedly been in development for years but, as of early 2017, has not begun filming.

Fan Reactions to the Film 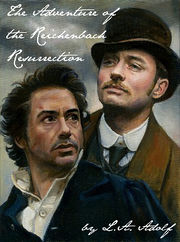 The fanzine The Adventure of the Reichenbach Resurrection, cover by Lorraine Brevig (2010)