The Comics Big Bang was a big bang challenge in Comics Fandom. Authors had to write a minimum of 10,000 words, and artists had to create a minimum of one piece of a medium of heir choosing.

Title: Some Assembly Required
Author: valtyr
Betas: dieewigenacht, truthiness_aura and cursor_mundi
Fandom: Marvel Adventures
Pairing: Steve Rogers/Tony Stark
Rating: NC-17
Wordcount: 58k
Contents/Warnings/Spoilers: Very general spoilers for MA:IM Armour Wars. Issues of consent involving not being fully informed about the person you're sleeping with, sex swap. A joke lifted from XKCD, which is footnoted at the end.
Summary: Tony Stark is trying to set up a new superhero team when he's given a sex change, courtesy of Victor von Doom. He copes with that about as well as you'd expect.

Title: O'er the Dark-Green Sea
Author: poisonivory
Artist: ajremix
Fandom: DC Comics (Green Lantern and Green Arrow, mostly)
Character(s)/Pairing(s): Kyle Rayner, Connor Hawke, Oliver Queen, Jennie-Lynn Hayden, Hal Jordan, and pretty much all the other (Earth) Lanterns and Arrows. Kyle/Connor, Kyle/Jen.
Rating: PG-13
Warning(s): Violence, mid-19th-century attitudes (ETA: white, Anglo-American mid-19th-century attitudes) towards race.
Summary: On his first mission as a captain in Her Majesty's Royal Navy, Kyle Rayner finds himself aboard the pirate ship Green Arrow, prisoner of the dreaded Captain Queen. As Captain Gardner, Commodore Jordan, and Kyle's fiancee Jenny launch rescue missions, Kyle finds himself struggling with a growing attraction to Queen's son Connor. But is the Green Arrow really what it seems? What does Sinestro the pirate king want with Kyle? And does Kyle really hold the secret to the green light that can give its bearer the power to rule - or destroy - the world?

Title: Road to Damascus
Author: irrelevant
Artist: melancholise
Rating: Adult
Word count: 37,000+
Fandom/Genre/Characters: DCU | Batfamily AU | Dick Grayson, Tim Drake, Barbara Gordon, Bruce Wayne
Summary: In a universe where Bruce Wayne is willing to kill, the Graysons never fall. His family alive, Dick Grayson stays with the circus. He's happy. Tim Drake grows up in Gotham while his parents travel the globe. He has tutors and a lot of money and a camera. He's not happy, but he's almost okay with that because he has Dick. Even if Dick doesn't know it.

Title: Finding the Way Home
Author: dixid
Artist: perletwo
Fandom: DCU/Marvel
Character(s)/Pairing(s): Jason, Lian and others
Rating: PG-13
Warning(s):* Mentions canon character deaths
Word Count: 11,149
Summary: Home might be where you hang your cape, or possibly home is whose cape is hanging beside yours. Jason Todd had made a life for himself in a strange multiverse, now he’s suddenly responsible for a similarly displaced Lian Harper.

Title: Ripple Effect
Author: Lara
Artist: coldfiredragon
Fandom: DC Comics/Bat Books/Titans
Character(s)/Pairing(s): Slade/Dick
Word Count: 10,570
Rating: NC17
Warning(s): lots of male/male sex, gratuitous use of deux ex machina
Summary: He thought it was a dream but instead, someone gave him a wish, a wish that changed everything. Everything had gone wrong after Slade Wilson killed his son and, in doing so, was possessed by him. What if he hadn't looked Joey in the eye? How would the world, how would he change? For one thing, he woke up the day after falling asleep to find a pretty gypsy boy in his bed.

Title: No Guiding Light
Author: suki_blue
Artist: ani_bester
Fandom: DC Comics
Character(s)/Pairing(s): Dick/Tim, Damian, Jason, Bruce, Deathstroke, Ragdoll
Rating: NC-17
Warning(s): None
Summary:When Bruce Wayne returns from the dead and reclaims the Batman mantle, Dick is relieved to slip back into the Nightwing costume, and Gotham becomes a family concern. But things do not go smoothly. Dick finds it strangely lonely not having a partner swinging by his side, Damian clashes with his father over the reintroduction of Jason to the household and Tim, still wearing the Red Robin costume, cannot shrug away the dark shadow of the last three years. It’s up to Dick to get their collective heads together so they can function like the family they long to be, and that’s not easy when he’s fallen in love with one of his brothers and another is intent on revenge.

Title: Secrets Away
Author: modestroad
Fandom: DCU
Character(s)/Pairing(s): Dick Grayson/Barbara Gordon, Bruce Wayne, Dinah Lance, Jim Gordon
Rating: R/Mature
Warning(s): Miron drug use. Language. Angst. Adult theme.
Summary: Is a secret strong enough to break them apart or bond them forever? Dick is going to find out that sometimes you have to break something just to fix it.

Title: Gravity: The Fundamental Things Apply
Word Count: 21,500
Author: jazzypom
Artist: doctorv
Fandom: Young Avengers, Marvel 616
Beta: ryuutchi
Character(s)/Pairing(s): Kate Bishop/Eli Bradley, Kate Bishop/Tommy Shepherd, Cassie Lang, Billy Kaplan, Thomas Shepherd, Teddy Altman
Rating: R for language, mostly. See the warnings for the rest.
Warning(s): highlight to see, please. Language (ablelist, in the forum posts for two lines), hints of torture in the last quarter of the story. Some gore. Summary: Eli left Young Avengers to become a librarian, and moved to somewhere not NYC. It's five years down the road, and he's peacefully living his life until Kate shows up on his doorstep, dragging him back into the world he renounced all those years ago. Eli doesn't necessarily want to go back, but there's the small matter of the mystery behind his grandfather's death to sort out.

Title: Without Irony
Author: tsukinofaerii
Artist: revengedog
Betas: cursor_mundi & dieewigenacht
Fandom: Marvel; Iron Man 616. End of Dark Reign
Character: Tony Stark
Pairings: Steve/Tony
Rating: PG13
Warnings: Amnesia, Slash, painting the fourth wall, spoilers.
Summary: Open file TS_762-b.ims... Sometimes, when a drive is completely broken, the only thing to do is wipe it clean and start over. When he wakes up, Tony has no idea who he is, or what he did to end up where he is. Depending on who he talks to, he was a villain or a hero, a genius or a degenerate. What he is now is still up for debate, but it doesn't look like he's going to have much time to figure it out. With a computer in his head screwing up and a country falling to pieces, options are getting limited. Steve The world needs Iron Man a lot more than it needs Tony Stark. 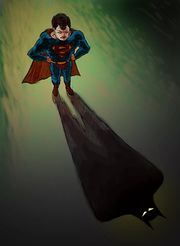 Art for Simulation Hypothesis by spiralred

Title: The Lost Alchemist
Author: fleur_de_liz
ARtist: pollums
Fandom: DC Comics, Justice League International
Character(s)/Pairings: Booster Gold/Blue Beetle, many cameos
Rating: PG
Warnings: Mentions of minor character deaths, including death of a child.
Word Count: 34,000 words exactly!
Summary: In an alternate Earth governed by gods and ruled over by the all-seeing Oracle, where magic is the order of the day, there is a town called Marquette. This town has a terrible secret, one that seems to revolve around the enigmatic, enormous blue beetle creature named Ted. Traveling fortuneteller Booster Gold and his clockwork bird Skeets are determined to discover the truth about Ted, the Kord family, and the lost alchemist. But is the lost alchemist real, or is it as much of a fairytale as the story of the star who fell in love and fell to Earth? Will Booster be able to handle the cost when the gods demand payment? And what will Ted do when he is faced with an impossible choice and the wrath of the Black King?

Title: Twelfth Night
Author: nekojita
Artist: reveillez
Fandom: Young Avengers/Marvel 616
Character(s)/Pairing(s): Teddy/Billy
Rating: NC-17
Warning(s): Hmm, teenagers in adult situations
Summary: After a surprising discovery on the internet, Billy decides to switch things about in his relationship with Teddy. However, fate doesn't seem willing to oblige him. Notes: The timeline is purposely a bit vague - it can be set after the Civil War.

Title: The Ribbons and the Rot
Author: soda_and_capes
Artist: mrsfrankenstien
Fandom: DC Comicsverse
Character(s)/Pairing(s): Steph and Jason. Bruce/Jason, Dick/Jason/Tim, mentions of Steph/Cass and Steph/Tim.
Rating: NC-17.
Warning(s): Very brief, theoretical mention of non-con.
Summary: "Robin," she says again, meeting his eyes even behind his mask. "As in Batman and. Better half and all that."