From Fanlore
(Redirected from Kenneth Hutchinson's)
Jump to: navigation, search

Kenneth Hutchinson, more commonly known as "Hutch," is half of the crime-fighting duo Starsky & Hutch. He is played by David Soul[1]. 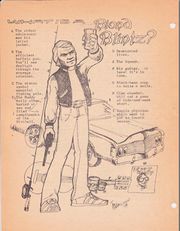 His Devotion to Starsky

Some popular fan fiction topics: the trauma of having heroin injected into him by force, his past with Vanessa Hutchinson, speculation about his family and upbringing, the ordeal of seeing Starsky shot in the fourth season, helping Starsky with various canonical misfortunes, how he copes with things after the end of the fourth season, and of course, his intense relationship with his partner.

The show's fourth season features a Hutch whose physical appearance had noticeably altered. Many fans claimed they saw major changes in his behavior as well, feeling that he was more bitter and depressed, and more abrasive towards Starsky. Near the end of the season, he became so disillusioned by his job that he temporarily quit (Starsky did as well, but only after hearing Hutch's decision). He also slept with Starsky's girlfriend Kira behind his friend's back, which nearly destroyed their friendship and which many fans saw as OOC. A great many fanfics (particularly character studies and Angst) are dedicated to exploring or explaining Hutch's behavior during this season, as well as Starsky's concern for (or contribution to) it.