Mind If I Join Ya? 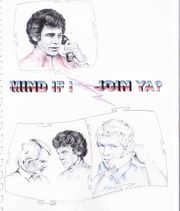 Mind If I Join Ya? is a gen (with one slash story) Starsky and Hutch fanzine containing 117 pages; it was published in 2004. Cover art is by Evelyn; interior art is by Evelyn, LAP, Annette Lynn, Jean C., Tabby Davis, and Vg.

It is a charity zine; all profits went to the Elizabeth Glaser Pediatric AIDS Foundation.