Timeless is a slash Starsky and Hutch AU anthology. The cover art is by Suzan Lovett.

From the editorial in issue #1:

Traditionally, there have never been many AUs in SH, especially in comparison to Star Trek or Pros. In fact, Mirror Universe stories -- a Star Trek canon concept of another universe where the same characters exist but in malevolent roles-- can be found in almost every fandom... except Starsky and Hutch... If you are still unsure of just what is an alternate universe , at least by my standards... it can be as complex as putting our boys in another country and another time, say England 1858, or France during World War I. Or it can mean just changing one thing about their normal universe, such as, what might have happened if Starsky's dad never died, or he was never sent to LA as a kid, and became a cop in New York instead. It can be even subtler than that -- how different would their lives be if Hutch did have a brother? Or you can tilt their known Bay City universe just by hiding a telltale pointy ear tip under magical glamor.

...has one of the most mind-blowingly beautiful covers you'll ever see anywhere. (Buy two copies and frame one cover.) Plus, hey, the stories are pretty good, and I don't even like A/Us much. [1]

Well, unless there's a disaster in the printing process (always a possibility), it looks like TIMELESS, a Starsky/Hutch AU zine WILL be out for Zcon. I sent an url a few days ago for the wonderful cover art Suzan did for the zine. It will be a double sized fold out color cover. The zine will be 215+ pages long, and will *wonderful* stories from Charlotte Frost, jat sapphire, Dana Austin Marsh, [Rosemary C], Elizabeth Lowery, James, and LAPinn, with art by Virginia Sky. Because I haven't been to the printers with it yet, I can't predict the price yet, especially since I know the cover is going to cost more than usual (but worth it!) I think folks will find a little of everything to please them in this zine. It's romantic, charming, sexy as hell, funny, intense, innovative, and very well written and well plotted. I love these stories and I'm hoping you will, too. Debuting at Zcon and available by mail afterward (and also at Eclecticon!) [2]

Summaries below are by Flamingo: [3]

See reactions and reviews for Gentlemen, Start Your Engines.

See reactions and reviews for Another Dawn Patrol.

[the cover art by Lovett]: As for paying quite a bit of money for a [non-fannish] oil painting, well actually I don't have any qualms about that at all - if nothing else it will hopefully be an investment as well as giving you pleasure. It should (all being well) appreciate in value. I'm not sure why I don't feel the same about a painting of a fannish nature. Part of it could be that I'm not a big Lovett fan (the gorgeous manips that people like Killa do are much more to my taste), but also I couldn't help thinking that it was an awful lot of money for what it is. It's unlikely that the work will be recognised as a future classic, unlike an oil painting such as the one you purchased. And then I think I'm being awfully snobby. After all, if I can be of the opinion (which I am) that the best fanfiction is as good as most of the pro fiction out there, who am I to decry the worth of a fannish painting? [4]

I thought "Timeless" was fantastic, and I'm one of those people that has prejudices; I can't stand AU in S/H. I *thought* I couldn't stand it, anyway. "Brother's Keeper," by Elizabeth Lowry, changed my mind. I thought it was strong, sexy and brilliant, and not so far from cannon that I couldn't believe it absolutely. This was emotional kick-ass time. The ending poleaxed me and made me read the whole darn thing over--and over--again.

"Gentlemen, Start Your Engines," by Dana Austin Marsh was recommended to me before the "Timeless" was even printed, which did nothing except make me think, "Aw, *no*." Boy, was I *ever* wrong. It was incredible; an psychological and physical roller-coaster. The ever-present danger of what Starsky was doing (and the stunning love story/sex) drew the whole story taut as a stretched bowstring.

"Me & Thee," by James, had me laughing...sort of...at first. Then I had to lock all the doors and draw the blinds on the windows. *Shiver*! I'd like to see a sequel to *that* one, and I wish it had been longer; but in its brevity was its shocking strength.

"Befogged," by [Rosemary C], did something else I didn't think an AU could do...it sucked me into another of my favorite worlds and blended it with S/H so seamlessly and poetically I could practically hear music while I was reading it. The sense of sacrifice was palpable and heart-rending. And the phrasing of words themselves was magical.

I don't want to say *too* much about "Another Dawn Patrol," by jat sapphire. The incredible amount of research that went into the story made the dialogue, as well as the setting, entirely believable. On top of the wonderful story, as I started to read the love/sex scene at the end, I thought, "Whoa! This is a "Dangerous Vision" on *top* of being an AU!!" So neatly placed, it whacks you in the face with its "And you thought *this* was the *end*, sucker!! *Wrong*!!"

So, YES, Flamingo, "Timeless" was a resounding success, as far as I was concerned. Though I'll always cling to "Dangerous Visions" along with the other beautiful, familiar S/H fic I've read, "Timeless" converted me. Now, aside from Suzan's "Goliath," (that masterpiece of "gen" fic--well, as slashy as gen can get; leave it to Suzan,) I'm waiting with bated breath for you to convert a religious slash reader to gen. Which I don't think the second coming could do, but it seems you're working miracles here... [5] 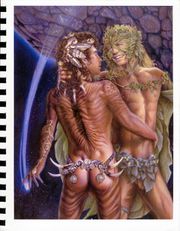 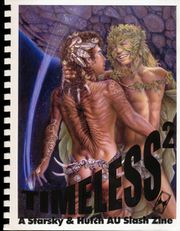 See reactions and reviews for Pigs in Space.

Timeless 3 was published in 2010 and contains 180 pages. Suzan Lovett cover and interior art by Enednoviel and Nicky Gabriel. 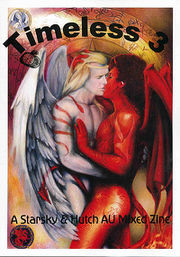 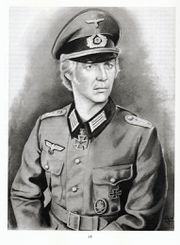 inside art from issue #3 for the story The Secrets of Men, Enednoviel

[Murder Ward]: I read this originally when it was in a zine, so I was really excited that is is now online. This is an AU version of the episode Murder Ward. Starsky is still a cop but partnered with a man who has been injured, so he wasn't able to go undercover with Starsky to Cabrillo State. Starsky's on his own as a suicidal patient, and has to rely and trust the sympathetic orderly Ken Hutchinson for his safety. I love how Dana Austin Marsh weaves Starsky's history in (the incident with Prudholm) yet slightly alters the events because now Hutch isn't a cop. They still have that instant connection, but aren't quite sure how to trust one another. DAM's attention to detail is always a joy, and this is a long, satisfying read. [6]