Another Dawn Patrol is a slash Starsky and Hutch story by jat sapphire. 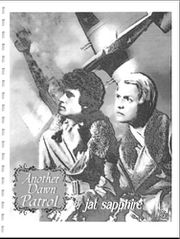 title page from the print zine

It first appeared in the zine Timeless #1, was archived at Me and Thee Archive until that site went down, and is now at AO3.

From the online version:

This story is a remix of the 1938 film Dawn Patrol, starring Errol Flynn and David Niven. A lot of the dialogue is transcribed from the videotape (because it was that long ago). The film is set in 1916, though there are various anachronisms in it that I have simply adopted, as well as fictionalization of historical events, places, names, etc. And I've probably made mistakes, as I'm not a WWI historian. My apologies.

The hardest POV decision I remember making was for the AU "Another Dawn Patrol". I wanted Hutch's POV, but the whole story could not be told that way. I needed another POV, but I didn't really want to do the same old, same old half-Starsky half-Hutch. Also, of course, I was following the movie Dawn Patrol, in which the other point of view from the flyboys is the colonel and his second in command. I enjoyed doing the Blaine scenes, yet I never wrote a story completely from a non-SH POV...at least not about them--there's always the "Cup of Decaf" spinoff of the virtual-season story, which is a Dobey piece, but Starsky and Hutch don't appear in it.[1]

One more from the new A/U zine pubbed by Flamingo, Timeless. Despite this being a very different premise from the show—this Starsky & Hutch are WWI flying aces, and British to boot—the love and need between the guys is so real it practically leaps off the page. jat sapphire is one of my very favorite authors in this fandom, and this story illustrates why that's the case. It's engrossing, believable, and thoroughly riveting, with a gorgeous, lush ending. (And hey, nice inclusion of the Bear!) [2]

I don't want to say *too* much about "Another Dawn Patrol," by jat sapphire. The incredible amount of research that went into the story made the dialogue, as well as the setting, entirely believable. On top of the wonderful story, as I started to read the love/sex scene at the end, I thought, "Whoa! This is a "Dangerous Vision" on *top* of being an AU!!" So neatly placed, it whacks you in the face with its "And you thought *this* was the *end*, sucker!! *Wrong*!!" [3]

In our show, Starsky wonders "what if" they'd had different names?

Well, how 'bout we ask another "what if" question? A BIG one?

No, listen. Come back.

I know, I know. It's an AU. And, I know, AUs can be scary sometimes. Lord knows I'm not their biggest fan. But, seriously? This one's a gem. Jat's a brilliant enough writer that she could probably make me invest my time and emotion into Starsky and Hutch as a pair of gay trout (although I'd really rather she not try), so believably setting them up as a couple of WWI fighter pilots is a cakewalk. She describes the story (first published in the all-AU SH zine Timeless) as a remix of the old Errol Flynn film The Dawn Patrol, but you don't have to know anything about that movie to fall in love with the story she tells. It's grand, and epic, and makes you viscerally ache for the boys, for them being them, for being what they are, for being in love and stuck in the middle of a war. It made me laugh, and it made me cry, and when it was over I didn't *want* it to be over - which is enough for me to add it to my own personal favorites list. I think it could do the same for you.

Excerpt: This afternoon, at the end of a very official captain's inspection of the A-flight planes (and then a very unofficial session sharing a flask with Richardson, the head mechanic, and talking about letters from home), Hutch came in to find Starsky and Watkins in the farmhouse kitchen nursing a pot on the fire. The smell caught him at the door and absolutely mesmerised him. Smooth and rough, sweet and bitter as Starsky's tongue had been, when they'd kissed in the field. Hutch's mouth filled with saliva until he could hardly ask, "Starsk? Chocolate?"