You may be looking for the Professionals zine, Leather and Blue Jeans. 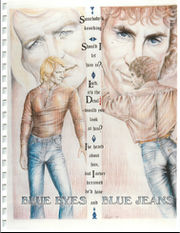 Cover of issue #1, by Suzan Lovett

Blue Eyes and Blue Jeans is a slash Starsky and Hutch anthology edited by Linda McGee and Pat Massie.

"Somebody's knockin', should I let him in?
Lord, it's the devil, would you look at him?
I heard about him, but I never dreamed
He'd have blue eyes and blue jeans..."

[Starsky and Hutchinson are Dead]: Why this must be read: For the new year, a silly little play that goes over the top and makes you appreciate the boys even more. This was originally published in ITP's Blue Eyes and Blue Jeans. If you've seen the show, the inside jokes will make you laugh. If you've never seen the show, this piece takes the little things and makes them that much bigger. Bay City may not be the most dangerous city in the world, but SH are certainly the most unlucky when it comes to crimes. Plagues, poisonings, shootings, and hitmen...they're all knocking on Starsky and Hutch's front door. [2]

[Uncharted Wilderness]: This story was originally published in the zine Blue Eyes and Blue Jeans (which is a really good zine). Hutch is taking Starsky on vacation in the wilderness. Starsky does not like the wilderness. You do the math;) This is set after Coffin for Starsky and Hutch thinks it's a good idea to get them away from the city for awhile, after Starsky's near-fatal run-in with the poison. Except, Starsky gets sick again and with the fever comes a break-down of his barriers. Whether it be delerium or truth coming out, the words are spoken and the body responds, forcing Hutch to deal with it. Which would be fine if the memories remained, but when the fever broke, so did Starsky's memories of the revelations he made. [3] 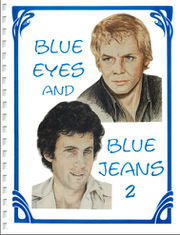 Blue Eyes and Blue Jeans 2 was published in 1996 and contains 193 pages. It has a color cover by Linda Cody. Interior art is by J.J. and Evelyn. It won the STIFfie (Best zine – Misc. Category) at Media West in 1997.

From the editorial: "The alternate universe principle -- Most SH writers respect the events of the series as canon when creating a story. The only difficulty with this approach arises when one wants to write a love story set anywhere prior to 'Sweet Revenge.' To most fans, the characters of S&H don't lend themselves to the premise that they shared a casual sexual relationship while continuing to date, yet the guys were competing over women right up until the end of the series. Options are to make all stories post-Sweet Revenge, or to be a little flexible when viewing a particular story as an entity separate from the series' time line. In this sense, while we have remained true to the series' events preceding the events of the tale, some of these stories might be considered alternate universe."

See reactions and reviews for Happy Birthday to You.

See reactions and reviews for Why I Live at the Best Western.

[The Salt Point]: This story hit a *lot* of my buttons. It begins at John Blaine's funeral and all the emotions and regrets and pain – and truth – that this event brings to Starsky, and to Hutch, as well. It's so very beautifully written, with language that for me, truly illustrated the emotions and feelings. Very sweet and thoughtful, with a lots of thinky thoughts on the parts of both our guys as separately they come to a shared realization, but at different times. The love and caring is so very evident, and the writing flows, carries you on a wave and makes you not want to put the story down to do mundane things like make breakfast for your family. :) [4]

[Happy Birthday to You]: "Happy Birthday to You" is one of Flamingo's lesser known stories. It is a little gem that I go back and read over and over again because it is so delightful. Flamingo can write drama, angst, hot love scenes and in this story she tackles humor with her usual flair for perfection. To me, writing humor and being able to pull it off successfully, shows the true talent of a writer. With this story, Flamingo has shown she can do all.

It has the usual cliches, Starsky and Hutch get drunk, they wind up in bed together, but she adds a twist. They go back, get drunk again and repeat the action with much laughter and hot sex! I will never go to another Mexican restaurant again without thinking of this story.

So, grab a melon margarita, this story and sit back and enjoy. [6]