You may be looking for the Starsky and Hutch zine, Blue Eyes and Blue Jeans.

Leather and Blue Jeans is a slash Professionals anthology.

A new PROFESSIONALS zine based on the magnificent Suzan Lovett artwork called, of course, "Leather and Blue Jeans," is now in the works. PAL PRESS is calling for submissions based on, or inspired by this artwork. If you are interested, please write to the addresses above for a xerox copy of the drawing. Writers are encouraged to submit stories that answer the question posed by this picture, or asks new ones. What has or is happening here, and why? How would you get Bodie into a pair of blue jeans? (very carefully?) Are they part of CI5 and undercover, in an alternate universe or, (fill in the blank). While we personally like romantic, feel-good stories, submissions of all varieties: slash or straight, serious or humorous, novellas, short stories and poetry are equally welcomed. We want it all! (Greedy bastards!)

Contributions should be at least five full pages. There is no maximum length restriction and submissions must be in no later than June 15, 1993, with a possible debut at Zebracon 1993. That's months and months away! No deadline pressure! This should give everyone plenty of time to do their thing—us included. We'd like to avoid that rushing-from-the- printer-to-the plane feeling many publishers get just before a convention. There is a possibility of more 'leather and blue jeans' art being included, and it will printed offset to best display the beautiful Lovett artistry. The text will be xeroxed.

This may be a new press but it's committed to producing a quality product. Ye old editorial policy is thus: spelling, punctuation, and other grammatical errors will be corrected, and (and hopefully no new ones added). Editorial changes will not be made without full consultation and approval of the author.

It you are interested in contributing or have any questions, please drop us a line. [1] 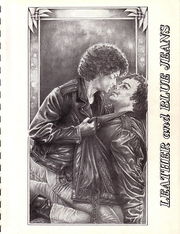 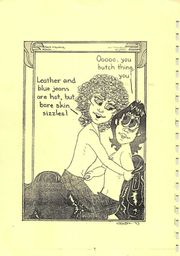 The back cover cartoon on issue #1 is by Karen Eaton parodying the front cover.

Leather and Blue Jeans 1 was published in 1993 and contains 232 pages. The front cover is a black-and-white drawing by Suzan Lovett and the content of the zine is based on it with the artist's permission.

See reactions and reviews for Nothing Left to Lose.

[Swept Away]: "Leather and Blue Jeans" -- I'll confess to having read only one story in it--my own, which I thought was pretty good, though it could have used a bit more conflict right before the "it's love, not sex" admission scene. I was going to read the rest, honest, but [S] kept bursting out laughing while reading her copy at Zebracon, and that kind of put me off it. [4]

[zine]: BLUE JEANS AND BLACK LEATHER is my favorite all time Lovett drawing, but the zine was a major disappointment for me. I will admit, though, that given a choice between a zine that has a mediocre to bad cover illo and a zine with no cover illo at all, almost every time I'll pick the no picture [5]

"Clemency" by Dee is a post-Wild Justice story.

"Partners" by Nina Boal is an alternate universe story in which Doyle is a tough, high-class whore and Bodie is a downtrodden rent-boy on the run.

"In for a Penny, In for a Pound" by Baravan has Peter Skellen of the movie Who Dares, Wins (played by LC) on an SAS mission involving CI5 and his looklike Bodie.

"As Far As Is Appropriate" by Jane Mailander is a death story.

"Clarke's Third Law" by Wally is an AU with fantastical elements in which Bodie and Doyle run afoul of a mad scientist who has concocted an immortality drug.

"See How It Goes" by C. A. Rien is about unrequited love.

"Nothing Left to Lose" by Jane is set in a post-apocalyptic world destroyed by a comet, in which Bodie is a Protection Office in a frontier town and Doyle a gunfighter. The sequel, "Bounty" by Jane, is in Other Times and Places V. [6]

This zine has my "Bodie the cunt" story, PARTNERS. There is more to the story than I described last time, believe me — I didn't want to "spoil" it.

As for the rest, several of the stories didn't really fit the Suzan Lovett print except in vague, thematic ways. I always thought that "Art Print Theme" zines were literally supposed to use the art as an illo to fit a specific scene in the various stories.

I haven't read all of the stories; especially I haven't yet the Jane/Kathy Keegan novella — I've been told that it is excellent and that a reading treat awaits me.

Baravan's IN FOR A PENNY, IN FOR A POUND is a nice interweaving of Bodie, Doyle, and Skellen (Lewis Collins character from one of his mere movies, I forget which one).

RUDE AWAKENING had a plot quite similar to many other slash plots I've seen. But H.G. did her usual masterful telling, so I enjoyed it muchly.

I do also want to say that Gale Good, the editor, was very thorough and exact in her editing, and I enjoyed working with her very much on my story; her edits and suggestions for change were quite reasonable and reminded me again how valuable a good editor can be. [7]

Leather and Blue Jeans 2 was published in 1995 and contains 124 pages. The front and back covers by Suzan Lovett won a 1995 STIFfie Award. Cartoons by Karen Eaton.

See reactions and reviews for In God's Country.

[front and back cover art]: .... the matching Pros pictures. The Bodie will long live in my mind: Beautiful face, beautiful hair, beautiful nipples, beautiful nipple ring...Even finding the photo ref for this piece didn't lessen its power for me. Incredible piece. Then there is the corresponding Doyle. Um, well, Doyleish/Robertish kind of guy. We were calling it Ray Plant and Robert Doyle all weekend. If it sincerely was an attempt to meld the sexiest features of two of the sexiest guys in fandom, I applaud the effort (if not the result). If, as is more likely, it is just Robert's hair and shoulders erupting accidentally onto little Ray's flesh, well, ewuoeueuowu. [9]

"Citadel" by HG is told through Doyle's pov as he reflects on his life and Bodie.

"Clan of the Aurochs" by Dee is an alternate universe story in which Bodie and Doyle are prehistoric cavemen in a tribe with Cow-lee as shaman.

"Words Without Form" by K. Ann Yost is a hurt/comfort story in which both Bodie and Doyle are injured in a bomb blast and Murphy helps out.

[zine]: Adored that back cover. The front cover turned me off with Doyle in his fake looking wig, but boy did Bodie in handcuffs catch my eye. I not only bought the zine, but later bought an art print at a convention and had it transfered to a t-shirt. This was at a time when you had to do things in person and at the local level, but I managed to keep a straight face throughout it all. I loved the t-shirt so much that I would only hand wash it and allow it to air dry so as to not ruin the transfer. Now that the time has come for me to downsize my fannish collection, I am lovingly handing it on (for free) to the next fan. I hope you get as much enjoyment as I did from owning and wearing it. [11]

[zine]: Well, this was a disappointment. Has some nice short stuff by HG and DVS and our own Karen Yost (okay, I've got one in there, too), but the major chunk of the zine is taken up by this thing called "Clan of the Aurochs" - I started reading, got past "The People" "The Cold", the foraging, "matelings" and other Extreme AU Stuff, and then ran smack into "the Cow-lee", who was busy casting ceremonial bones... um, thanks, but no thanks. The cover art has that awful Ray Plant/Robert Doyle drawing and the back has the Bodie with handcuffs, but the repro quality is so poor that you can't see the nipple ring in his rather oversized breasts. Oh, well. [12]

[zine]: I remember fans talking about seeing the covers for the first time while walking through the dealer's room. When they saw Bodie on the back cover, they begin running up to people stammering out incoherently, "Ooh, ooh, where, where, there, look, there!!!" with many wild gesticulations. Needless to say, as soon as they calmed down and located their wallets (and their verbal skills), they ran right over and bought copies. [13]

[zine]: I tried to crack "Leather and Blue Jeans 2", which I got for free 'cause of a blatant "toss-off for the trib" story, but couldn't get past that long AU thing with "The Cow-lee". Yikes. [14]