Mel Keegan was an author of several books for The Gay Men's Press in the 1990s, and now publishes through Dreamcraft and Lulu.[1]

In 2003, from Mel Keegan's website in 2002: "The Mel Keegan Online site was built by DreamCraft from fictional text supplied by Mel Keegan and artwork by Jade. The site design and function are copyright by DreamCraft. All parts of the site are strictly copyright. The universe of HELLGATE is entirely original, and this website will expand over time to incorporate characters, locations and technologies, a fore-taste of the richness of the new SF-series from Mel." [2] [3]

Keegan's first book "Ice, Wind, and Fire" had a very slash-like quality to it, resulting in several discussions about Filing Off The Serial Numbers‎. (See Fans Turned Pro.)

For decades, Mel Keegan did not invoke any pronouns when referring to their career and creations. In 2013, Keegan's bio at their website started to contain the pronoun "he." [4] This pronoun was also in use in 2018. [5]

Mel Keegan's first novel, ICE, WIND AND FIRE, appeared with GMP in 1990. In the following years many other novels have appeared, including the sci-fi thrillers, DEATH'S HEAD and EQUINOX, which have become cult classics.

At this time there are 25 Keegan novels, with 19 in-print and the last due for 2008/09 reprints with DreamCraft; and Mel is working on two series (HELLGATE and NARC) in addition to finishing a raft of stand-alone novels.

The first of these, THE DECEIVERS, NOCTURNE and THE SWORDSMAN, have already appeared on the DreamCraft label, and the next stand-alones, THE LORDS OF HARBINDANE and FALCONHURST, are either in pre-press or close to it.

For almost a decade the Keegan novels were issued by GMP (the Gay Men's Press), but after the merger with Prowler and Millivres, GMP became more or less 'dormant,' selling only old titles, and apparently publishing only those novels which had been in pre-press at the time of the merger.

Mel's fifteen-year association with GMP has completely wound down: only a few the early novels are still available from the old GMP website and the new Millivres-Prowler Group website.

But Mel had no intention of retiring as a writer, and before contractual matters had finally been settled with GMP/MPG, talks had already begun with local South Australian studio, DreamCraft.

The name of 'Mel Keegan' has become synonymous with fast-paced action/adventure thrillers with pivotal gay characters and themes.

A self-confessed science fiction and fantasy devotee, Keegan is known for novels across a wide range of subjects, from the historical to the future action-adventure. Mel lives in South Australia with an eccentric family and a variety of pets. [6]

Other fans have openly stated that they recognize Keegan's work from Professionals zines.

Mel Keegan's Ice, Wind and Fire is not the only fan novel to have been rewritten and published, of course. There's another which is an almost word-for-word copy of an S/H novel. Afraid I don't remember the title or author of either the zine or the pro novel, but if you see it on store shelves you'll know it [7] [8]

Keegan talks about fancasting, and possibly more, in a 2003 interview: 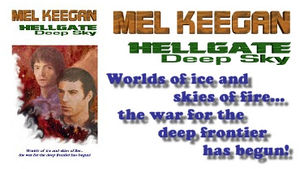 cover of the original "Hellgate" -- "In conference with Mel, I went through a ream of sketches. A soccer player, two actors, and a rock singer all contributed to Jarrat's 'real' face ... and it took three actors and a rugby player to get Stoney down! Then the fun began." -- comments by Jade at MEL KEEGAN TALKS ABOUT DEATH'S HEAD

They should! They're 'icon' characters which have been a staple of Television for decades. Gay adventures with a romance at the core have a great deal in common with the 'buddy shows' which have been so popular over the years. When TV producers are casting the parts for the characters, it's a 'given' that the characters (and by extension, the actors), must look in all ways different. From the mid-60s right through till the end of the buddy-show era, the favorite match was a taller, more robust guy and a slender, smaller one, and in virtually every instance, there was one dark and one fair, and almost always one with curly hair, one with straight ... is anyone old enough to recall Alias Smith & Jones, CHiPs, Starsky & Hutch, The Professionals, Battlestar Galactica, Blake's 7? Even as late as The Sentinel and Highlander the casting agencies were still following the tried-and-proven pattern. The fact is, it's also easier for the writer to nail down the characters if they look distinctly different.

When we're trying to plan the covers, I tell the artist what or who I think the characters look like, often naming a half dozen different faces ... cricketers, rugby players, actors, models. Then it's over to Jade, and the magic mouse-pen. The paintings take a long time and the faces are combined to achieve a final composite, and here's where it gets clever:

Three readers could look at the same character and recognize three different 'sources' for the face. The end result is familiarity, which is what we're looking for!

The faces on the cover of DEEP SKY are composited from four different sources ... I'll leave it to you, right here, to see who reminds you of whom! [9]

What's true gay science fiction ... and what is an SF novel with an occasional gay reference? Does a gay-friendly reference here and there make a novel into a gay book? MK has been asking this same question for some time; and the answer is so convoluted, each reader has to decide from him- or herself. For example, how much would it astonish you to learn that Moby Dick has been listed in the 'best gay novels of all time' category? We were surprised. We've read it! What did we miss?

Which is a good way of saying, if the gay 'subtext' is so subtle that even we didn't see it till it was pointed out to us ... are you absolutely positive it was a gay novel (film, show, whatever), or could you be reading into it something that isn't actually there? Carl Sagan coined the phrase, 'Where there are strong emotions, we are liable to fool ourselves.'

There is, however, no such doubt when Mel Keegan's imagination turns to the science fiction genre. There is nothing subtle about these novels. The up-front, 'in your face' treatment of gay heroes, lifestyles, themes, issues, is like the proverbial breath of fresh air.

The NARC series is not written for younger readers; and it's probably true that the mainstream SF readership probably still isn't quite ready for these novels either. The books are just a tad bit too forthright ... no 'pussy-footing' around any bush, no messing about with 'subtext' material which leaves you wondering if you actually saw what you think you just saw, or if it was all in your imagination!

If a novel is going to explore gay SF honestly, it needs to deliver on its promises, actually BE a gay novel rather than a straight novel with a gay character who appears now and then — on other words, the 'token gay.' (In American TV,some time ago, a series would have a 'token black,' a character who was somewhat gratuitously created as an African-American, so the series could legally claim to have to racial bias. Gay chatracters in the Hollywood product are still struggling to achieve that dubious status, but we can live in hopes. Plus, a decade or so after the 'token character' makes an appearance, mainstream shows start to get genuine characters, with genuine stories written for them. And that's something to hold on for.) In an unpredictable genre which often fails to deliver the goods, the NARC series over-delivers. Mel Keegan seemed to set up the scenario and characters on the first novel, and then let them off the leash, let them run. Readers are carried along with them at break-neck velocity, and when the action becomes intimate, your reading glasses will certainly steam up.

It's a twenty-fourth century that would conceivably give conservative old Gene Roddenberry a complex. This future is an era when men could be real women if they wanted to, and women could be real men, and no one would even notice what was going on, becuse gender liberation has happened, past tense, and there are bigger issues to worry about. Gay science fiction, more than any other genre, has the potential to examine alternative futures which might easily become real. Mel Keegan's work has a strangely oracular 'feel' about it. [10]