My Heroes Have Always Been Cowboys

My Heroes Have Always Been Cowboys is a gen 134-page Starsky and Hutch novel by Teri White.

It is the first in a series of three novels:

The fic Vermont Avenue, Homecoming, written with permission by a different author, is a sequel to this series.

In My Heroes Have Always Been Cowboys, we pick up immediately where Hopscotch left off. The doubts that Starsky had before are back with full force. He needs to quit and so does Hutch. So what do they do to earn money? Start up their own PI firm--Confidential Investigations, Unlimited. And they take on a missing person case for Dobey's old friend. A missing person that vaguely resembles Hutch in the description of his characteristics.... This case takes them over the rodeo circuit and through some tough spots, but can they find the answer in time? [1]

The author lists these song credits on the table of contents page:

They used to be the best cops on the force, but what happens when that life falls apart and they don't know how to pick up the pieces? Well, Dave Starsky and Ken Hutchinson are still doing their thing, but now they're doing it as private eyes. CONFIDENTIAL INVESTIGATIONS UNLIMITED may not be the biggest, most successful detective agency in town, but give'em time. It's a good life, playing the private eye game. Almost like being in a paperback book. And in books, nobody gets hurt, not really. But then a cowboy named Andy Jones turns up missing and all of a sudden the game is over. People start dying. The same old hurting is back. This is their first big case. And somebody out there wants it to be their last. [2]

Starsky and Hutch have finally had it with being cops. Now, as private detectives, they can pick and choose the cases they want to take, and one of the current cases is a missing person. Andy Jones is a rodeo clown who disappeared one night, and whose lover asks Starsky and Hutch to find him. As the case progresses, Hutch begins to realize that there are a lot of parallels between this man and his partner, and he and Starsky. [3]

It is exciting to watch a writer grow, develop, and improve with each succeeding story. It is disappointing to see that same writer stagnate and regress with plot techniques and writing style. From Promises to Keep through Hopscotch, Teri White showed constant growth with her understanding of the major characters and In her own methods of story-telling. ‘Cowboys’, a sequel to ‘Hopscotch’, depends upon a plot direct from Soul's ‘Dan August’ episode, with characters drawn directly from White and Kurz's Magnum Force series. Tyler Monroe is the cowboy of the novel's title, a combination of Dirty Harry Callahan and Bronco Billy. He is a Clint Eastwood look-alike, and is illustrated without noticeable difference. His best friend has disappeared and he hires Starsky and Hutch, now private investigators, to find him. It has been a year since the end of ‘Hopscotch’; the excitement of their new profession has worn off and the tedium of the investigations business is setting in. But because Monroe is a friend of Dobey's, Hutch takes the case. This is the Hutch of the mid-second season: health foods, exercise, and all. He is tired of the grind, but keeps on going; he doesn't know what else to do. Starsky still grasps onto the fantasy and romance of being a private investigator — he's playing Sam Spade, expecting Mary Astor to come through the door any day looking for the Maltese Falcon. This is a first season Starsky: junk food and ratty clothes. He doesn't like their new client, and the feeling is mutual. The question of homosexuality is finally discussed between Starsky and Hutch — Monroe and the missing Jones are lovers — but the situation between the partners is left unresolved and dangling. Their reactions to the relationship of Monroe and Jones differ, and lead to a momentary rift between Starsky and Hutch. Though the investigation is resolved, the story of what has happened to Starsky and Hutch is not. They have not reevaluated their lives, nor have they learned anything about themselves during their year as P.I.'s There is an underlying problem ever-present, never recognized, never discussed. The communication between Starsky and Hutch is ever superficial and business; it’s as if they don't want to let themselves be known to the other. In the single character-revealing scene little is said and nothing is resolved. There exists the same situation at the end of ‘Cowboys’ as at the beginning: they are both tired of the situation in which they find themselves and both are unwilling or unable to open up to the other about it. Perpahs ‘Cowboys’ only needs one more through the typewriter. Perhaps it needs more – no one is credited as ‘editor’ – but one is left with the distinct feeling that it could be better. As for a recommendation, I did enjoy the story, the artwork, the entire experience. But ‘Our Heroes Have Always Been Cowboys’ does not fulfill the expectations justified by Teri’s previous record of progressive improvement. [4]

Sometimes it's as hard to review a good zine as a poor one. There's nothing to complain about. MHHABC is a good zine. The story moves along at an even, quick pace. The characterizaitons of Starsky and Hutch are excellent and keepign with the show. The characters Teri White creates are real and vibrant. This story is not sexual (graphic or S/H), not violent, and not deeply psycho-analytical. It is simply a well-drawn mystery. On the technical side, the typos are few, the correction may deter little from the flow of the reading, the reproduction is good, and the artwork is distinctive. The zine is not over-loaded with art, but what is there is excellent. My only complaint with the art is that Ruth Kurz portraed Tyler as Clint Eastwood, and kept thinking of No Name! He did fit the description, though. As far as the story goes, I only found one major flaw (if you can call it that). It is a story of a case Starsky and Hutch have after they've gotten off the police force and become private investigators. I want to know the story behind their leaving the force. I'm greedy. To sum it up, this would be a good zine for any Starsky and Hutch fan. For neo-fans among us, which, to be honest, includes me, it would also serve as a nice introduction to Starsky and Hutch fans. [5]

I think most people are dissatisfied with COWBOYS because its main emphasis is actually on someone else besides Starsky or Hutch and fandom may not be ready for that as of yet. While I enjoyed it—not enjoy, that's the wrong word, perhaps it would be better to say that it held my interest--there was a feeling of emptiness due to the lack of hope in the story. When Teri told me that it was finished, I remember saying that I hoped that it was not as much of a downer as the previous one. Now I understand her laugh better. [6]

What we have in ‘Cowboys’ is a very impressive and significant psychological study of survival and healing. IT IS FRUSTRATING. We want them to be like they were; we want them to be happy again… For the relationship to achieve its former status, each individual must rediscover himself. One can’t do it for the other, no matter how much they might wish to. [7]

In this sequel to Hopscotch, Starsky and Hutch are off the police force and working as private detectives. It's the kind of life Starsky, a big fan of paperback detective novels, claims is ideal. It's fun, easy-going, and uncomplicated... until their first big case comes along. A rodeo cowboy named Andy Jone is reported missing, and Starsky and Hutch are hired by his best friend to find him. Working with only a minimum of seemingly unrelated clues, they launch into a case that takes them from the dust of the rodeo ring to the estate of one of the highest-ranking politicions in the state. Along the way, their progress is complicated by murder and attempted murder, uncooperative witnesses, and their own doubts about the emotions the case dredges up within each of them, especialy Hutch. There is practically no extraneious material in this zine. Everything directly concerns the plot, and in a case of a mystery, that's the way I like it. It reads very quickly with the characterizations true to the televised characters which lends even greater believability to the story. The artwork is superb for the most part, if you overlook the fact that Andy's friend, Tyler, bears a striking resemblence to Clint Eastwood. I would recommend this zine to anyone who enjoys S&H and a good mystery. It combines the best elements of both. [8] 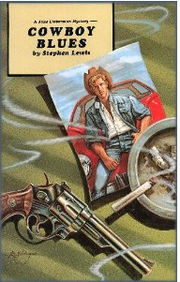 cover of pro book this zine became in 1985
The author filed the serial numbers off this zine and sold it as a pro novel, keeping the plot and character names (Andy Jones and Tyler Monroe) the same. There are differing opinions on how much else was changed in this mutation. One fan writes:

Teri White's newest novel, Cowboy Blues by Stephen Lewis (her pseudonym for this in case it becomes another series), will sound familiar to SH readers of My Heroes Have Always Been Cowboys, although it is a complete rewrite with interesting differences. [9]

Summary of the pro book:

JAKE LIEBERMAN is the entire staff of Confidential Investigations, Unlimited. In his first, and so far only recorded case, Jake is hired by handsome, weather-beaten Tyler Monroe an older homosexual to track down his younger lover, an aspiring cowboy singer. No, really... as Jake puts it, "Just what this case needed, a Buch League Gene Autry." [10]

From a review of the pro book:

Tyler Monroe's partner -- Andy Jones -- disappears after 15 years together. No note. No reason. He seeks the help of private eye Jake Lieberman. Jake, thinking that maybe Andy wanted a change of pace after 15 years, reluctantly takes the case after realizing how heartbroken Tyler is.

During the first night of Jakes' search, Ty receives a mysterious phone call, telling him to come alone to get Andy. Sensing something suspicious, Jake tags along and the meeting ends in gunfire. His interest now piqued, Jake finds out that Andy's disappearance isn't just a case of the seven-year-itch. Somehow, it's tied in with a strong political family, and now, it's Jake's job to find out just what's going on.

Overall, this is an average mystery novel. The characters are okay, but there isn't enough about them to really get involved with or to care about them. Some of the writing is a little too clichéd, as if the author were trying to get the feel of a Mike Hammer or Philip Marlowe mystery and left me wondering why there were a lot of little bits of information that weren't really necessary. The story itself is okay and moves quickly. It's a good book to read while sitting at the beach. [11]