Vermont Avenue and Homecoming is a pass-around gen 142-page Starsky and Hutch novel by S. Soliste. 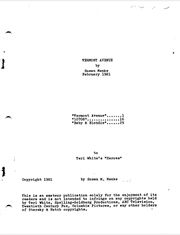 cover of the first 66-page edition

text from the first 66-page edition

The writer of the Vermont Ave/Homecoming stories spun off from Teri White's gen series that starts from Copkiller. The author was a friend of Teri and had Teri's blessing.

Thanks, folks, for all the orders of "Son of Starsky & Hutch" (aka VERMONT AVENUE)—I hope you have as much fun reading it as I had writing it.

Other stories were added later.

There has been some dispute about what constitutes "publishing" and "private." A fan in 2002 wrote:

When we did the Paul Muni Special con back in '85, to celebrate the 10th anniversary of SH and we had fanfiction awards where everything published in the fandom up to that time was considered together, a lot of people had wanted to vote for that story but we had to leave [Homecoming] out due to that last part, the slash "Homecoming" not being published. I remember ads the writer placed in the letterzines for the "Vermont Avenue" stories, but I'm pretty sure she never actually sold "published" versions of "Homecoming."" [1]

To my "Vermont Avenue" friends who've written to ask what happens when S&H bring the baby home from the hospital: there's a 6000 word sequel, "Homecoming." If you like it, I may write some more eventually, but I'm too busy with other writing now to publish another zine. "Homecoming" will cost six stamps (or $1.20, check or money order) to xerox and mail. Thank you, folks, for your comments and interest over the last ten months. I really enjoy hearing from you.

Flamingo says in the foreword of the zine:

Susan (M's) 'Vermont Avenue' and 'Homecoming' stories, when joined together, create a unique novel. The stories were never published as a zine. Written before personal computers or the Internet, the stories were passed fan-to-fan when access to photocopying was not so common. The Vermont Avenue universe was the creation of Susan's friend, Teri White. Teri wrote several gen novels in SH in the same 'universe.' When Susan wrote these stories, her readership was familiar with Teri's work. Today, Teri's works are becoming available again on the Starsky and Hutch Archive, but many fans have not yet read them, and so important references in Susan's work will not have the same meaning to them..." In these stories, "Hutch becomes more and more disillusioned with police work in Teri's novel, Copkiller, but stays out of loyalty to Starsky. In Hopscotch, Hutch is imprisoned for a murder he didn't commit and at the same time, Starsky disappears. They are separated for nearly a year, while Hutch languishes in jail... In Teri's final novel My Heroes Have Always Been Cowboys, both men quit the police force to start a private detective firm. They take on the case of a missing young cowboy, the parter of an older bronc rider. Soon, it becomes apparent that these men were lovers. The older cowboy's fear that his best friend and only may be love causes Hutch to think about his own feelings... Susan recreates Teri's universe and builds on it with the first three stories in the series, usually called, 'The Vermont Avenue Stores.' Consisting of 'Vermont Avenue,' '10708' and 'Baby & Blondie,' these stories are considered gen, but they are gen only with a surface reading. Susan does an amazing job of mimicking Teri's style and recreating her story-telling flavor. The chain of events moves along at a breakneck pace, so quickly, that if you aren't paying attention, and you haven't read Teri's work, then you might miss subtle character changes and hints of conflicts to come... The three Vermont Avenue stories are followed by five more referred to as the 'Sequel to the Vermont Avenue Stories' or 'Homecoming,' the title of the first story of the group.

Vermont Avenue is a collection of three -- I hesitate to call the genre S&H, but Starsky and Hutch are the lead characters -- private detective stories, all by [S M]. Not only are the circumstances of this trilogy derived from Teri White's My Heroes Have Always Been Cowboys, but [M] uses an interpretation of S&H similar to Teri's in her earlier and, and unhappily, worse work. Hutch spends half the stories either getting conked on the head or recovering from getting conked on the head, while Starsky eats Cheerios with chocolate sauce. This does not show great imagination. [S M] is very derivative; unless you've already read MHHABC, it's difficult to figure out the stories' background. The characters are not even as a deeply written as Teri White left them. There are stock characters and stock plots in the three stories... The atmosphere is as if time stood still at 1947, what with all the gypsy palm-readers, dry-cleaners and liquor plotters, the only somewhat contemporary note is struck by having the Gangster sue Starsky... Craftwise, the first two stories in particular are choppy and defy the reader's involvement... She could also do well to minimize the narrative, the sections entirely composed of he-went, he-told, they-did, not only because it would make the story more interesting, but because her dialogue is rather well done. S&H at least do sound like detective partners. She can create a plot, even if a far from original one, and spin it to an end; 'Baby and Blondie' is of the quality you might find in one of the lesser detective magazines. Certainly people who enjoyed MHHABC may be apt to find something to like in this. But for me, these stories are awfully dull for six dollars, with not even a classy cover to recommend themselves with. [2]

technically a set of circuit stories, but it works as a novel better than most of those "stories written on the installment plan" [3]

I'd also plug Vermont Ave, though I admit it is waaaaay my kink, and therefor I probably can't be trusted to recommend it. (Not the rape kink, sillys, the 'we do it, but never talk about it' kink.) It is a collection of connected stories by the same author; i.e., almost a novel, but not quite. [4]

Yes, you are getting the grey matter in my brain to function and I do remember more of Vermont Avenue. Don't let the kid scare you off as there have been several stories-with-kids popping up in fandom. whether or not I want to saddle my heroes with kids doesn't detract from a well-written story. I don't have to agree to enjoy it. [5]

[Homecoming]: I remember in the unpublished story, "Homecoming" when they finally were ready to become lovers, Hutch bought an entire case of K-Y cause he was too embarrassed to go to the drug store they usually shopped at and he instead ordered it from a wholesale place!... It is available from The S&H Library. It's one of my very favorite stories, and I wanted to contact the writer, who dropped out of fandom totally many years ago, but a woman who is still friends with her warned me against it. She said she was sure the writer would forbid from even making copies available through the library. She no longer wants any association with fandom, which is too bad, since she was a terrific writer. But Homecoming, the copies of which was so pale it was unreadable, has been restored, and is available from the library. [6]

The "Vermont Avenue" gen, detective stories were sorta unmemorable and unremarkable, but I don't think I'm alone in believing that "Homecoming" is one of the best stories ever written in SH. [7]

[Vermont Avenue and Homecoming]: This slash "zine" was a loose collection of stories that started where Teri White's gen novels ended. I love this "novel", I love S. Soliste's spare writing. She accomplishes in a paragraph what would take me a 100 pages to accomplish, and does it beautifully. This novel will never be on the net as the writer is out of fandom and would rather her stuff disappear. [8]