Promises to Keep is a gen 76-page Starsky and Hutch novel by Teri White.

Cover and all interior art by Paulie Gilmore. Art has been included on Fanlore with the artist's permission. 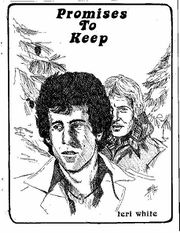 Its Place in Fandom History

"I was told that Promises to Keep was Teri's first SH story, and the first time she wasn't writing in Star Trek. (Remember, at the time, Star Trek was pretty much the only [media] fandom). Teri was a well established Trek writer -- a slash writer, I believe -- and her breaking away from Star Trek to write -- gasp! -- about a cop show was astounding to most people. Star Trek was a massive fandom, but Teri's following was strong enough that people were willing to read her cop show stories. Interestingly (according to Ruth Kurz who told me this) though Teri and Ruth were both active in slash fandom from other shows, and Teri and Ruth both wrote and put together the entire Harry/Johnny fandom from Magnum Force, they never "saw" Starsky & Hutch in a slash context, which was pretty astounding considering how close those two guys are." [1]

"Starsky and Hutch are called in on their day off to drive up into the mountains to pick up a bookkeeper who is prepared to testify against his mobster boss. In the snow and icy conditions of winter, the partners get to the cabin and retrieve their passenger, a snobby, whiny, frail man who instantly gets on their nerves, and begin to drive back down the mountain. But someone has been watching and now a roadblock halts their passage. In a split-second decision, Starsky decides to make his own way off-road and drives into the forest amid a hail of bullets. It isn't until he looks over and sees that Hutch has been shot that he knows they're all in real trouble..." [2]

Gen. But it's the special kind of gen that can satisfy a slashy little heart like mine. It's a real nail-biter, too. [3]

[Promises to Keep]...is a melodramatic get'em that left a lot to be desired in matters of plot and medical accuracy. With the exception of a few brilliant moments, like the opening hangover scene, or Starsky's muddled single-mindedness when Dobey finally finds him, this first effort is more an exercise in reader aggravation than a story with something to say. [The the reviewer apologizes a bit in the letterzine's next issue for her review of of the zine: "I'm sorry if my review was a bit acerbic. It's just that when someone writes that well, I expect perfection."] [4]

I was introduced to Starsky and Hutch fandom by reading borrowed copies of Zebra Three which I found enjoyable, but I did not become a full-fledged fan until I’d read ‘Promises to Keep.’ This lovely little novella, obviously designed to delight the reader, is an exquisitely executed example of that long-time favorite, the hurt/comfort story, set off perfectly by Paulie Gilmore’s pen and ink illustrations. So often I read that Starsky and Hutch stories that have good ideas, but are lacking in the skill and inspiration that make the characters come alive the way they do in Teri’s stories. So many us are fans who try to write ‘our boys.’ Teri is a writer who is also a fan – a winning combination to benefit us all. She catches her characterizations with clever and poignant descriptions and dialogue. Instead of saying ‘Hutch is delirious’ as a lesser writer might, she shows us with his stream of semi-conscious memories and fears fuzzily fused together in his fight to live. Also, Teri does not depend on aired episodes for inspiration. Nice as those fill-in-the-missing-scene, or what-happened-next stories are, they cannot compare to the originality of a born writer, yet she never deviates from the known facts about the characters nor takes liberties with their lives as laid down by their creators and producers. As an English teacher, I find it satisfying to read, at last, a Starsky and Hutch fan story that is grammatically correct… [and] the opening hangover scene is a delight to my teen-aged students and anyone who has ever had difficulty waking up, as well as to those of us who have shared the morning-after experience. Humor is generously sprinkled throughout the story to alleviate its serious side; and love, that much-needed commodity in this wishful world, is the pervading theme… What a pleasure and inspiration it is to read about devoted friends who really have the courage to succeed at all the things we wish we were brave and strong enough ot do for one another. That is what fiction is for – to show us in an entertaining and pleasurable way an ideal for which to strive. ‘Promises to Keep’ has kept all those promises for us, and a future filled with further stories by Teri White looks – promising! [5]

To begin with, I’m personally unfamiliar with Teri White as a writer and don’t know whether or not this is her first published piece or her 427th… The pacing is good, it’s well-plotted, and the characterizations of S&H are good. Her writing isn’t purple, and there’s a good balance of prose and dialogue. The zine itself looked good – the printing is clear and readable. The artwork is excellent. I enjoyed the story while reading it, even though I’d prefer to see a few action/adventure stories rather than hurt/comfort stories. After all, these guys are supposed to be to of LA’s best cops; I’d like to see that occasionally. However, I read it cheerfully because there’s not much S&H fanfic out there and I’ve already read the Zebra Threes several times. There are several flaws. One of these is the story is too long. There are too many scenes of aching reminiscences and guilt-tripping. I wish Mendela had been less of a stereotyped coward-fully villain. My biggest complaint is with the medical facts used… I don’t care how heroic Starsky’s soul is, on a broken ankle he’d have been unable to haul Mendela or Hutch on a a travois; by rights, he’d had trouble walking. The CPR Starsky used on Mendela was incomplete; he used chest-press only and no breathing… Finally, in real life, both Hutch and Starsky would have died of hypothermia. I’m probably being nit-picky, but a Red Cross First Aid Manual is cheap, and if you wish to write hurt/comfort stories, a basic knowledge of the subject wouldn’t hurt. In general, I enjoyed the story tho I was rather disappointed in the zine. Granted, it was a one-shot published solely to see the novelette ‘Promises to Keep’ in print, but there wasn’t even an Editor’s preface! A flyer arrived with it, announcing another S&H novel by Teri; it might have been better to hold up on ‘Promises’ and print them together. I guess I’m saying that the price paid was too high for the contents. One long story, with huge margins, and lots of white spaces, that came to only 76 pages unreduced, is a mite skimpy for $3.25. [6]

Suspenseful story with a lot of emotional impact as well. Starsky and Hutch are assigned to escort a protected witness from his mountainside cabin, where he's hiding out, to the city. But the criminals he's set to testify against are watch the trail up the mountain, and catch up with our guys on the way down. Starsky does his best to control the Torino on the ice and snow-covered path, but the hunters open fire, breaking window, the radio and shooting Hutch in the chest before Starsky loses control of the car, and it careens off the road. Having been left for dead, Starsky has to decide the best way to get the gravely wounded Hutch down the mountain through wind and snow and cold for help while still protecting the witness (who is fine after the wreck) His decision is further complicated when the witness has a heart attack, and Starsky is only able to drag one of the men down the mountain on the travois he's built. Will he choose his duty or his partner? It creates a horrible conflict in the dark-haired member of the team, as me must decide which man to leave behind and, hopefully come back for later. [7]

Teri's novels were amazing, weren't they? Even after all these years, they're still a treat to read. I loved all the little touches she had. There's just so much she packed into her stories that it felt like you >were watching a whole new ep....

(ok, so Starsky did walk miles in a blizzard with a broken ankle to rescue Hutch in PROMISES TO KEEP, but otherwise).

Want to talk about being totally infatuated with a writer? I am usually the hardest reader to please. IF there's a plot hole the size of a dust mote, I'll see it. I've read that story a million times. Last year, Flamingo gave it to me to clean up the scanning errors, so I read it again. And in the twenty years I've been reading the thing, it never once occurred to Ms. Impossible to Please that Starsky couldn't have walked two feet on that ankle! Now, that's a great writer! LOL

Her stories were so good they didn't need to be [slash], and, even though she never said it and had them dismiss the idea in My Heroes..., I always thought that they were lovers off stage. She never did have them dating girls on screen in her stories (except for once in that one where Starsky got shanghaied, so that cured them of that! LOL) and that made it very easy to believe that there was more going on than what we were seeing. [8]

I'm a sucker for long stories, and I like a good hurt/comfort fic as much as the next reader. This one's a classic. Sleepy and hungover, the boys are pulled in on their day off to pick up a witness and ferry him to the Feds. Simple, right? Except it never is. There's a secluded cabin, a chase through a blizzard, and choices that no one ever wants to make when someone they love is hurt. It's well-written, well-paced, and I particularly like Starsky's characterization as a man so determined that he'll do anything to make sure they all survive. [9]

This is the most incredible S&H story. It's the one that got me into the fandom when it was written twenty years ago. Teri captures their hearts like few other writers ever can. It's not slash, per se, but it doesn't need to be. The love is there, even if it's not expressed with sex. If you like S&H at all, or just want to see what the fandom is about, this is the story to start with, because it's them. [10]