Ice, Wind and Fire is a Bodie/Doyle fic by Kathy Keegan in the Rainy Days Universe. 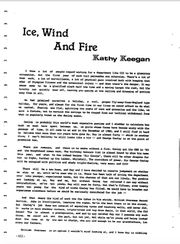 In it, Bodie and Doyle try to take a peaceful holiday in Jamaica. Of course, they get into hot water.

A fan in October 1990 wrote: "Do you all know that Kathy Keegan's "Ice, Wind & Fire" has been published as a professional novel, under the name Mel Keegan. The names of the characters have been changed. I haven't seen the book yet, but I have seen a picture of the cover in a catalogue, and the two men are nothing at all like B/D. Whether this is because their appearances have also changed, or the pix doesn't properly illustrate the book, I don't know yet." [3]

What was your first published work? When was it written and/or published? Was it in the gay fiction genre?

My first published works were not in the gay genre, and were not on the Mel Keegan by-line; they go back to about 1980 – they’d be of no interest to anyone reading about Mel Keegan. To go into those credits, I’ll also have to disclose two or three of my pen names, and I’d rather not do this. Professional discretion!

My first professional gay fiction credit, now – that’s a whole ‘nother question! It was ICE, WIND AND FIRE, which was written some time in the late 1980s, contracted by GMP in 1989 and published in 1990. [4]

Now, let's take another slash novel, say... Yeah, let's, I'll be a bitch again. Let's look at Jane of Australia's Ice Wind and Fire again. All right, now we all know this is slash, because it's Bodie and Doyle, it was circulated widely in slash circles (unintentional pun, that!), it contains all the elements of so-called 'real' slash stories and yet, in my opinion, it is closer to mainstream gay novels than Shoshanna's less traditional piece is, simply because Jane's novel isn't about people, it isn't about exploring them or following them as their lives and loves unfold, it was all about using the characters as plot devices, things to be moved hither and yon in order to achieve (or rather, in order to attempt) certain effects. That, to me, is one of the critical differences in what does, or does not, work as slash for me. I have to fee] the story is about 'real' people, characters who are convincing and vital, with a 'life' of their own, rather than cardboard cutouts stuck in fetching poses designed to tug my heartstrings. [5]

Of The Professionally Published Version 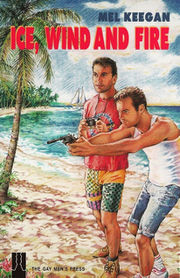 cover of the paperback version published by Gay Men's Press in 1990, 215 pages

"Better than some of the murder mysteries of the genre, not as good as Keegan’s Fortunes of War. This book was good in a lot of ways, in fact, I probably would have loved it if I hadn’t read Fortunes of War first. The characters are pretty cool, I like the fact they are journalists and have worked together for years, yet are still in love with each other and aren’t just "companions." There’s pretty good character development, even though the story is written from one character’s viewpoint, you still feel like you know the other guy, which is more than the last book I read (the Zubro mystery.) I’m not sure any other writer could have found so many different places for scenes all on a small island. I mean, these guys covered that whole island. I didn’t particularly like Greg getting raped at the end, however, I understand the dilemma of the author as to whether to just threaten more violence or to actually have something or some part of it happen. I mean, the guy had been threatening thru the whole book, I can see why it had to escalate at the end. And of course, there had to be justification for killing the guy at the end because they let it be known that if the guy went free, they wouldn’t be safe even in London. I wouldn’t mind reading some more adventures of these two, the book refers to many of their past adventures in covering hard-hitting stories for their magazine. On a scale of 1 to 10, it’s a 7."[6]