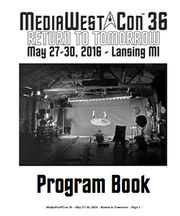 cover of the 2016 program book

Some Facts About the 2016 Convention

Elaine Batterby was the winner from 2015 and she was expected to attend this year's con.

Star Trash: Return to All Our Yesterday Tomorrows or The Once and Future Future (a Star Trek parody puppet spectacular written and performed by Gordon Carleton)."

"The 'Zine Room has been part of MW*C since 1982! In that time, fan-fiction has changed from being only print 'zines that were regionally or, at best, nationally known and available to fan writing that is primarily on-line fanfic with free world-wide access. MW*C is one of the very few cons that still has 'zines for sale or for reading. And what was originally just a small room for con members to sit and read current 'zines lent by other con members has changed and grown as well. It's added some different things over the years -- a Fanzine Archive that covers 30+ years and over 30 different fandoms, displays of 'zines on sale at the con, and the SF/Media Fan Fund Charity Auction. The ‘Zine Reading Room will again be located in the Ramada's Waverly Room."

From the first progress report: "We are revamping the SF/Media Fan Fund nomination and voting process in the hopes of getting more participation. Nomination deadline has been extended to May 9 and voting will be done AT the con. This will help deadlines better coordinate with MW*C PRs, allow us to raise awareness at the con, and allow the recipient to have a year to plan rather than scramble at the last minute. The silent auction will be held in the ‘Zine Reading Room. Look in the Program Book or for postings for times. Many thanks to all those who donated items."