S.H.I.E.L.D. sent Clint to kill Natasha who at the time presumably still worked as a spy for the KGB. Clint made a different call and the two developed a lasting partnership after Natasha joined S.H.I.E.L.D. The movies make a point of showing the two of them worrying about each other and villains such as Loki using their connection to manipulate and threaten them, but they are only friends in this version of the canon. They end up on opposite sides in Captain America: Civil War but reaffirm their friendship even while fighting each other. In Endgame their friendship was reestablished, and a central focus for the pairing, before Natasha's death.

The pairing particularly became popular after The Avengers film which referenced their history and indicated that Clint was the reason Natasha ended up joining S.H.I.E.L.D.. Fans interpreted their shared scenes as well as several background details (Natasha's arrow necklace in The Winter Soldier or her wearing Clint's hoodie) as romantic and many claimed the pairing would become canon in future movies. 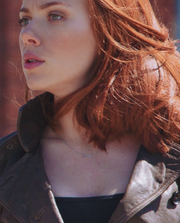