News for the OBSSEsed

News for the OBSSEsed was a monthly online newsletter for Order of the Blessed Saint Scully the Enigmatic that was published between March 1997 to September 2001.

The focus of this newsletter was the character Dana Scully, fan community, The X-Files, and general irreverence. The issues contained numerous photos, con reports for OBSSEsed Fest, articles, essays, poems, filks, humorous letters, a small bit of fiction, recs for fic, and parodies. It also had many, many delightful, playful photomanips, gifs, and graphics.

There were 41 issues. The last episode was published as many fans had lost their enthusiasm for the show due to casting and creative choices by TPTB, realization that there was to be little or no closure in plotting, probable weariness due to creating forty-one issues in five years, and finally, distress regarding the terrorism in the United States in September 2001. This latter is mentioned in the last editorial: "Luckily, we did not lose any of our members, but it became clear just how far reaching the OBSSE family was. With all this going on it became very hard to be funny for us here at News for the OBSSEsed."

News for the OBSSEsed was technologically advanced, sharp and silly, irreverent, pointed, loving, and frank.

The style of writing was that of a wacky, non-denominational religious order of sisters (and a few brothers).

In terms of sexual content -- while there is much discussion of MSR, Scully/Anderson is always the star of the show, and Mulder/Duchovny is portrayed as fairly dense, though attractive.

Explicit sexual comments and content were not allowed. M/M slash is never mentioned or recced, though there is a little conversation about "straight females" having crushes on Scully/Anderson, and mentions of lesbians.

The issues contained a single page/screen until the 25th one. After that, issues had multiple pages. Some of the navigation tools are tricky to find; as a reader, be alert to this fact so you don't miss anything.

Many of the fans and creators of this newsletter attended events for which Gillian Anderson was present: fundraisers, plays, set tours, and charity events. There are many photos and fan accounts of these visits.

Anderson was well-aware of this newsletter and the fan club Order of the Blessed Saint Scully the Enigmatic. She was presented buttons and other items from members, commented on its contents, and it was rumored that when she directed one episode of the show, she included nods to the club, something that she appeared (perhaps playfully) to confirm.

Welcome to the premier issue of "News for the OBSSEsed," a monthly Web newsletter for members of the Order of the Blessed Saint Scully the Enigmatic (OBSSE) and visitors to our humble virtual sanctuary.

First off, a big "Thank You" goes to Sister Autumn Tysko for giving this little ditty its name and for being one of our first contributors. Other thanks go to Sister Monet Inscrutable and Sister EP for contributing some creative contributions ( I like alliteration, what can I say?) to the site.

What you'll find herein is a little bit of everything related to St. Scully--essays, comments, creative works (short ones only!) from OBSSE members ranging from the serious (a poem based on a dream in this issue) to the outrageously funny (check out Sister Monet's "Hymn" sung to the tune of "She Blinded Me with Science." :) And of course, we offer opportunities for you to comment on what you read. Feedback is *always* welcome!

Oh, and most everything relates in some fashion to St. Scully, but you probably figured that out already.

What you will NEVER ever find here are rumours regarding Gillian Anderson's love/sex/or whatever life. Go buy a tabloid for those. You WILL find career-related news about the actress, however, a little bit of which is offered in this month's missive.

News for the OBSSEsed: May 1998, Archived version

The majority of this issue's content are con reports (some very creative) for the recent fan gathering in Texas. There are many photos. 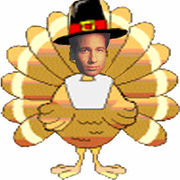 "Our Favorite Turkey" by Sister Kara (aka Zod), from issue #20

cartoon from issue #21 by Sister Kara (aka Zod) 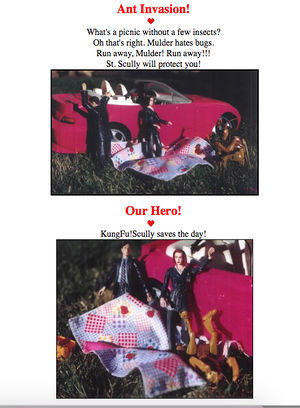 from "Valentine's Day with S&M" by Sister Nancy

July 1999 FEST Edition of News for the OBSSEsed, Archived version

This issue contains many con reports and information about the recently-held fan gathering: OBSSE Fest Extravaganza. This is the first issue of News for the OBSSEsed that contains more than one page (this issue had four pages).

This issue is the premiere of the newsletter's "bold new look." (lots of frames, multiple pages)

Well, with this month we experienced even more website fun! Seems that the new Abbey was just too popular and the website traffic generated by it caused Mindspring (don't even get me started) to decide that we were a commercial account in hopes of getting more money. Who knew? Maybe we should sell stock next. The good news from all this is that we do have a rather cool permanent home for all the Sisters and Brothers of the Order: http://www.obsse.com. Now, no matter where we move, the one URL will do the trick for all your Abbey needs. So, change your bookmarks again. Sorry for the inconvenience!

As of this issue: "World Domination: The OBSSE continues to grow at an amazing rate even in the off season. We're currently admitting at a rate of about 15 new Brothers and Sisters a week. In the last month the website has been visited by over 45 different countries as well. I'm a little afraid of what might happen once the season starts, especially if Scully is once again sporting fabulous hair."

Take a look at the CHarc from a guy's perspective: Brother Mike's.

Read about Sister Mandy's adventures with X-Files and brain juice in Russia.
Sister Squat raises the level of her artform by proving that even tax forms can be perved.
Zod's Karatoon suggests a better way to find out what really happened to Samantha....
Sister Tammy Perpetua describes her backstage encounter with the Earthly Incarnation at the Vagina Monologues. (Not the bragging sort, this story really had to be dragged out of her because she would never be so unkind to the less fortunate and point repeatedly at her shoulder and say, "Me and GA." Never.)
My favorite Abbey mother-daughter duo tell how they first joined the Order. Don't miss their "inside story," a series of instant messages.
Add another scary scientific term to your repertoire with Sister Lens-of-Science. Complete with printable table of do's and don'ts
Get Fest Updates, find out how to plan your NF Marathon, and take a peek at the OBSSE Yearbook. Plus Ask Autumn, OBSSEwood Minute, Poll Results and much more, all for your reading enjoyment.

OBSSE Newsletter: May 2000 News for the OBSSEsed, Archived version

This issue makes 34, yes, 34 editions of this newsletter to hit the web. We've gone from a little one page edition to a professional monthly publication over the years.

I have no idea if this is one of the last regular OBSSE newsletters or not thanks to the ever irritating FOX network and Mr. I'll Whine For Five Years About How Much I Want to Quit and Then Say Things Like "I definitely could do another year, but I really don't know if it'll happen." The plan right now is for our next issue to be a post-FEST wrapup issue like we do every year. In other words, our Annual Neener Edition. If, come May 18th when FOX announces its schedule for next year and The X-Files is on it we will make some decisions about how this missive will continue.

However, just in case things do wrap up, I wanted to say a few things. If we continue and I have to say them all again next year just forget you ever read this.

The OBSSE has been a weird and wonderful ride for me. I've been here from the beginning, run the mailing list from the start, been involved in every newsletter, been to almost every chat, planned three FESTs and led the group this past year. Despite the recognition I've gotten over the years for my reviews or spoilers, this is the most fulfilling thing I've done in conjunction with the X-Files, and frankly one of the most entertaining things I have ever done. I've made friends in this group who will last a lifetime and had more laughs from the daily barrage of that special brand of OBSSE humor than I can even begin to count. To the over 2000 of you who are members of this crazy Abbey, to those who were with us in the beginning, those who have moved on, those who have just moved in, thank you for contributing to this community.

Summer 2000 News for the OBSSEsed

This issue is six pages long, which is easy to miss as the navigation consists of tiny numbers at the top of the screen.

News for the OBSSEsed -- May 2001, Archived version