From Fanlore
(Redirected from Soul mark)
Jump to: navigation, search 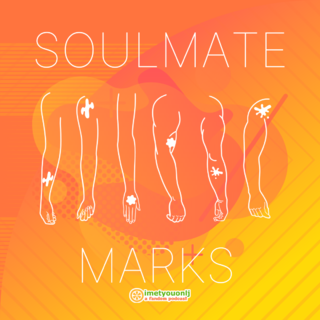 Soulmate Marks, also called Soulmarks, developed as a subtrope of Soulmates, commonly referred to as Soulmates AU. It takes the idea of people who are fated to be together further, imagining there is physical proof to identify this connection. Soulmarks are often explored through how this mark affects one's approach to relationships and the certainty of a destined relationship.

The most common types of soulmarks are Names, First Words, and Symbols.

Soulmarks are often identical or complementary. The mark may appear at a set time in the characters' lives – this time is often the eighteenth birthday or when a person goes through puberty. Sometimes the mark appears when the soulmate is born. So the younger of the pair is born with a soulmark, but the older character receives their mark when their soulmate is born.

Marks may also appear when the soulmates first touch each other. These marks sometimes appear on a character's body where their soulmate first touches them. In other cases, a dark soulmark may become colorful at first touch, or soulmates may share a deep emotional (almost telepathic) bond at first touch. First Words marks may appear as they are spoken.

Early in the trope's evolution, soulmarks were almost always on the wrist or hand and on the same place on every individual. With the advent of First Words or marks that vary greatly in size and appearance, soulmarks may appear anywhere on the skin. Sometimes soulmate pairs will still have their marks located in the same spot.

The mark of a soulmate that has died is imagined in various ways. It may fade and become fainter, disappear completely, turn black, or take on the appearance of a scar.

From the glossary of An All Too Jagged Snowflake:

Mark / SoulMark / Marked (noun, adjective) – The unique symbol that appears in the same location on both (+) bodies of Soulmates. Marks are typically white but may appear as a light shade of most primary colors, and turn black upon the death of one’s Soulmate. Marks are unique to a Pair of Soulmates and may vary in placement on the body size, shape, geometry, intricacy, and every other dimension. It is believed that a Mark persists across the different lifetimes of a Pair during each reincarnation. Any individual with a Mark is considered Marked.

Amateur and professional authors have written of such a "mark" for centuries without referring to it specifically as a "soulmark".

TiMER, a 2009 sci-fi romantic comedy movie, is likely a cause of the rise of soulmate-identifying marks in fanfiction. In the film individuals are able to get a TiMER, a wrist implant that counts down to the day when the user will meet their soulmate. There is a significant number of works that are a direct fusion with this movie and feature TiMERS. Timers that count down to a soulmate meeting have remained a consistent subtype of soulmate-identifying marks.

From soulmate timers, the trope evolved into Soulmate Names, a tattoo-like mark showing the name of one's soulmate, usually on the hand or wrist and in the soulmate's handwriting. In fan fiction, stories with this concept are documented as appearing in about 2011. The existence of a work inverting this trope in November 2011[note 1] [1] makes it likely that the trope was already established even earlier.

There seems have been a surge of Soulmate and Soulmate mark works in 2012/2013. The Soulmate-Identifying Marks tag on AO3 was created on January 11 2013, after the "Soulmate AU" tag was created on September 18 2012. Searches for "Soulmark" or "soul mark" on Fanfiction.net[2]and Wattpad also show results for works in 2013. There are references to the trope as early as July 22, 2012 on LiveJournal.[3][4]

The next evolution of the trope was First Words. This subtrope may have started with a viral Tumblr post by kenzie-no-mc (kenezbian) in April 2014. As ofJuly 2017, the tumblr post had over 730k notes.

By May 7, people had started writing fic based on the idea[6], which Kenzie reacted positively to.[7]

Soulmark has different types of identification marks for the soulmate characters involved. Some receive proper names that are easily identified by fans, while others, even older, have not yet reached a consensus on how to name them. Below is a list in alphabetical order:

On her birthday some kind of soulmark appears connecting the soul mates. In some works this happens at age 6, in others on 12/11 and some on 16/18. The trope has some peculiarities where someone has never received its mark for some reason that makes it different and unique.[citation needed]

When they touch/meet with their soulmate, a bright light -- sometimes pulsating -- will appear over their hearts causing their other half to also glow/pulse too. Also known as Glowing Heart.[note 2]

A character's vision changes once they meet their soulmate, the most common being they go from seeing in black and white to full color. The trope became more popular when it was used in a television series.[citation needed]

For some time periods, soulmates share their visions being able to see what their counterpart sees. Used by penumbria in his slash crossover pairing between Anthony DiNozzo and Jack O'Neill from NCIS and SG-1.

Unnatural colour appears in the place where the soulmates touched: for example, one character sports a blue handprint on their shoulder, the palm of their soulmate's hand is coloured blue etc.

"First Words" marks are typically the first words that one's soulmate speaks to them. The words are usually written in the soulmate's handwriting. Various authors have these words appearing at birth, or on one's 18th birthday,[11] etc. A later development was the words appearing only as the soulmate said them. First Words are rarely casual greetings. Instead the words encompass everything from compliments and bickering comments in fluffier works, to ominous threats in enemies to lovers fics. Sometimes these works are humorous, and focus on characters dealing with unfortunate or inappropriate words, or extremely generic words. In canon AU fics, dialogue from the source material can be used as inspiration for First Words.

Main article: Cut One and the Other One Bleeds

Any injury to either soulmate has an effect on the other, e.g. by a scar appearing as an exact match, by a bone breaking in the same place, etc. For obvious reasons this works best in genres where characters are likely to have scars or suffer repeated injuries.

An inversion of the previous trope, when what appears on your skin are the last words of your soulmate, which leads to a lot of angst works, as you will only know who your other half is at the end of your life. But there are also many less sad plots, where people live passionately without worrying about the last words until they come and everyone leaves happy for the time they spent together, whether your spouse is your soulmate or not.[citation needed]

When your soul mate's name appears on your skin - at any point in your life - mostly in the native language of your other half, or written in typography that the person signs their own name. Sometimes the real name also appears -- when the person does not identify with the one given at birth -- or an intimate nickname that very few know.[12]

Your soulmate's deepest thoughts begin to mark your skin, and in a two-way street your anxieties figure in your other half's skin.

A common trope is for the soulmates to bear matching markings, similar to birthmarks, or matching brands or symbols. These can be situated on the same part of their bodies, or appear in different areas. In other fanworks, the mark may be unique and represent the soulmate in some way.

This trope is sometimes linked to tattoos, which some characters might use to hide their marks and thus preserve their soulmate.

It may also be called an Writing Soulmate AU, Skinwrite, or Skinmarking. Where when one character writes on their skin, and what they wrote appears on their soulmate's skin.

When it comes to soulmates, trope subversions often explore missing, inaccurate, or confusing soulmarks. Like in other Soulmates AUs, some fanworks featuring soulmarks explore the themes of marginalisation, asexuality, polyamory and free will vs predetermination.

In worlds where people are not born with their soulmarks, a person may worry about how long it is taking for it to appear. If there is a set time when the mark is supposed to appear, the mark might appear at the wrong time. This often involves concerns over being "broken" and without a soulmate, or having to wait an extended time. In fics with a substantial age difference, this can result in character who believed they would never have a soulmate dealing with the sudden appearance of a mark after a long time. It can also lead to angst, as the younger character will not be aware of the age difference until they meet their soulmate.

In First Words works, a person's Words may be extremely mundane and common, such as "Hello" or "Excuse me." This leads to confusion and anxiety. A person will experience false hope each time a person says those words. If both soulmates have simple words, it make be hard to confirm that they are soulmates. A person's Words can also be embarrassing or inappropriate.

The possibility of removing one's soulmark also appears in a number of fanworks.