Data is a Star Trek newsletter, a club zine for the Australian fan club, Astrex.

"In 1972 Jenny Stevenson (now Kentwell) and Susan Clarke (nee Smith) published the first issue of what was to become Australia's longest running Star Trek fanzine, Beyond Antares (also held by the National Library).

In 1973 STAC (Star Trek Action Committee), a new Star Trek club comprising a number of old D.U.S.K. members as well as newer fans, was founded by Susan Clarke. Later that year, it was combined with a club run in Sydney by Julie Townsend and Edwina Harvey and the name changed to Astrex. The new name was derived from the asterix-like device on the command insignia worn in the television series. The first formal meeting was held in April 1976 and the first issue of the club's newsletter, Data, was published in August 1976. For a while, until Susan resigned as president in the early 80s, Beyond Antares was the club's fanzine." [1] 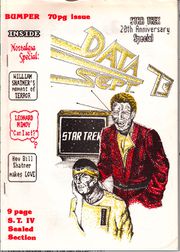 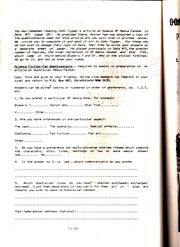 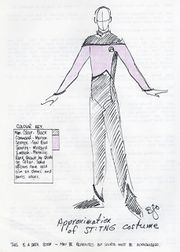 A sketch (from Bjo Trimble's memory) of the new Starfleet uniform in the then-upcoming "Star Trek: The Next Generation" TV series, during an interview for issue #78