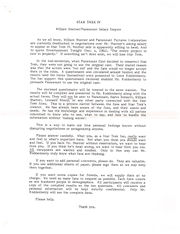 Ann Carver took matters into her own hands regarding the high tensions among fans regarding the next Star Trek movie and news about one of the many, many disputes fans had been hearing about regarding salaries and casting. Heated discussions had been raging in Interstat, burning up the phone lines, and were heavy on many fans' minds.

Carver sent out an open letter to fans and included a survey she intended to send to Gene Roddenberry.

Carver had been involved in other fan campaigns, so this was not her first rodeo, and she cited her 1974 Star Trek Movie Cast Poll as the reason the first movie was made at all.

Carver promised that Gene Roddenberry, who she considered a voice of reason and power, would read each letter, and told fans that one letter equaled one hundred "demographics."

The survey results were to be sent to Carver's home, and she assured fans they could request the results later.

As we all know, William Shatner and Paramount Pictures Corporation are currently deadlocked in negotiations over Mr. Shatner's asking salary to appear in Star Trek IV. Neither side is apparently willing to bend. And to quote Entertainment Tonight (Dec. 4, 1984), "The entire project is now in jeopardy." If something isn't done soon, we will lose Star Trek.

In the mid-seventies, when Paramount first decided to resurrect Star Trek, they were not going to use the original cast. Their stated reason was that the actors were 'too old' and the fans would no longer accept them in the roles. A questionaire was circulated around fandom and the results (and the forms themselves) were presented to Gene Roddenberry. The fan support this questionaire received enabled Mr. Roddenberry to persuade Paramount to use the original cast.

The enclosed questionaire will be treated in the same manner. The results will be compiled and presented to Mr. Roddenberry along with the actual forms. They will not be sent to Paramount, Harve Bennett, William Shatner, Leonard Nimoy, or any other party connected with the Star Trek films. This is a private matter between the fans and Star Trek's creator. He has always been aware of the fans, and their wants and needs. He has the knowledge and experience in dealing with all parties concerned to know who to see, what to say, and how to handle the information without 'making waves'.

This is a way to make our true personal feelings known without disrupting negotiations or antagonizing anyone.

Please answer candidly. What you, as a Star Trek fan, really want and feel is what's important here. Not what you think you should want and feel. If you back Mr. Shatner without reservation, we want to hear from you. If you think he's dead wrong, we want to hear from you too. All viewpoints are wanted and needed. Only in this way can Mr. Roddenberry truly know what fans are thinking.

If you want to add personal comments, please do. They are valuable. If you use additional sheets of paper, please sign them so we may keep them together.

If you want extra copies for friends, we will supply them at no charge.

We need as many fans to respond as possible. Each form counts as one hundred people in demographics. All participants will receive a copy of the compiled results on the ten questions. All comments and personal information will be kept strictly confidential. Only Mr. Roddenberry will see the complete data.

Re: the questionnaire mailed to me on Bill Shatner's salary bid. In the cover letter to the questionnaire, it is explained that it will not be shared with Harve Bennett, William Shatner... nor any of the cast and crew. I have to question this 'selective availability' of fan opinion. It seems inordinately unfair to cast, crew and the fans, themselves. Such vital information can hardly be a "private matter" between any one person and fans. I've never doubted that any studio. Paramount included, is rife with pecking orders, politics and prerogatives. Instinct then, tells me to suspect this use of an "insider" would be resented, could only further antagonize and disrupt the negotiations with Shatner and further delay the production of ST IV. I wonder at the negative phrasing of not only the cover letter, but the questionnaire itself. I would suggest that if fans are to be polled, far more objectivity in preparing such a poll should be used. In this case, only one question needed to be asked: "Do you support William Shatner?" Opinions, stated as questions such as is Bill Shatner trading on his fan loyalty, and phrases such as Shatner being "dead wrong" are highly subjective and may even tilt opinion in one direction or another. [1]

I would like to discuss a questionnaire currently being circulated, entitled "William Shatner/Paramount  Salary Dispute." The questions concern fans' attitudes toward William Shatner and his ST4 salary negotiations. It asks that answers be sent via Ann Carver to Gene Roddenberry so he may have "confidential" fan input to present to Paramount as a "private matter" without "making waves." The form letter asks that all answers and any additional comments be signed: "name and address must be given. Anonymous letters mean nothing." First point: the letter requests a signature — and is itself unsigned. Second: it doesn't appear to have occurred to the anonymous writer that the work contract of William Shatner, or anyone else connected with Star Trek, is none of our business. Third: the writer of this letter is asking that Gene Roddenberry be funneled information that is "private" and not to be made known to WS, LN, or HB, i.e., kept secret. Distorted? Possibly. Fourth: the questionnaire asks if fans would support ST without Kirk and/or Shatner, whether or not fans think Shatner is "trading his fans' loyalty for dollars," and if fans think he is "dead wrong.' I do not recall that such a questionnaire was circulated during the brouhaha prior to ST II. I do not recall that Gene Roddenberry agitated for Trek without Spock. Why should I consider it more acceptable for anyone to agitate against William Shatner than against Leonard Nimoy? I do not. And I am insulted at the suggestion. Not to mention disappointed that Gene Roddenberry or anyone connected with him, would attempt to undermine any of the Trek actors in this way. I thought we were more honorable than that. [2]

Uh Oh! I see by the consents in INTERSTAT #88 that I need to clear up a couple of things regarding the WS vs. Paramount questionnaire. I have already written to Harriett about the confusion so I'll address this to [Jennifer F] and to any other fan who has questions. First, my apologies for not being clearer on the cover letter to the questionnaire. Sigh. I did try, but evidently didn't succeed. Nowhere in that cover letter, in the questionnaire itself, or in any of my correspondence does it say that GR requested the questionnaire or that he had anything to do with its preparation. He did not. It is not to be sent to HB, LN, etc. as I do not wish this to antagonize any of the parties concerned. WS' negotiations with Paramount were (and am I glad that is the past tense!) his own business, not ours to dictate. No one has the right to tell another person how to conduct their own life. Not even the ST fans!

I picked GR for the reason that 1. he has always been interested in the fans, and 2. he is not actively involved with the ST films. The whole idea behind this survey is to find out if the fans support the actors or they do not. If they do, then Paramount must deal with the cast on that basis or lose the support of the fans for ST. If they do not, then the cast will have to be careful not to deal themselves out (unless they want out). What positive feelings can be gained by writing Paramount, the cast member who is involved, or the production people and say "you had better do it this way or else"? All that does is get everybody's back up! Better to do it this way, so that, should something of this nature happen regarding future films and an actor (any actor!), GR might be able to speak quietly and unofficially to either the actor or to someone at Paramount and show them the reaction to this situation. Maybe he will decide it will do some good, maybe he'll decide it won't and will let it go. That's up to him. He's been dealing with these studios and people for many years. I trust his judgment.

As to the questionnaire being 'negative' toward WS, sorry, I don't think it is. Only partial quotes were used. Where the letter says "If you think WS is dead wrong," it states in the previous sentence "If you back Mr. Shatner without reservation we want to hear from you." The questions themselves were not my sole idea. These are things I've had asked of me or said to me. So I included them in the questionnaire because they were good questions. Lastly, I had stopped actively Trekking after ST:TMP and didn't come back until after ST:TWOK. If I'd been around during the 'brouhaha' over ST II, I'd have done the same thing as now. I'm not picking on WS! I don't think ST can survive without either WS or LN. Oh yes, the cover letter wasn't signed because I didn't think of it. Not until Jennifer asked why! Cringe! If I have offended any WS fan, I'm sorry. It wasn't meant to do so. I purposely didn't send the form to any actor's fan club so as not to pad the answers in favor or not. I wanted opinions of general fandom. And I haven't heard of any of the general nastiness associated with LN's ST II problem surfacing over this problem.

So maybe the questionnaire did its job in giving fans a place to 'let down their hair' knowing only GR will see their letters. This is a lot better than the general tackiness that happened over ST II. If I'm wrong, it's me alone that's wrong. I accept all blame. [3]