Pangalia is a gen anthology published in Australia. There are at least ten issues, each containing about twenty-six pages.

It had a ten year run, and is quite possibly the world's longest-running Hitchhiker's Guide to the Galaxy zine.

Pangalia 7 was published in 1986 and contains 25 pages. The editor writes "Pangalia 7 [was] a 25 page illustrated A4 b&w photocopied fanzine inspired by The Hitch-hikers Guide to the Galaxy by Douglas Adams. It features 3 fan-fic stories (One a mash-up of HHG and Star Wars, another a mash-up of HHG and Dr Who) An article on 25 things to do with a dead mattress, the answers to a crossword that appeared in a previous issue, a regular "Dear Zaphod" column and a page devoted to ads, complete with typos, punctuation and spelling errors." (eBay auction of 2019) 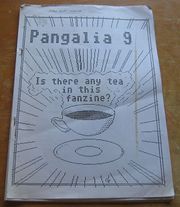 [This is a] fanzine I used to produce as a mad-keen fan in the 1980's. This issue dates from 1987, and is truly cringe-worthy. It features a HHG/Professionals alternate universe short story, with illustration, an article on the significance of tea in english comedy (with Young Ones references thrown in), and at least two pieces of HHG fan fiction (as well as a free tea-bag taped to the inside cover that i really wouldn't recommend you using). It was produced using a golf-ball typewriter, the cover was made by one of those then "whizz bang state of the art things" known as personal computers, in fact, I think it was generated on a Commodore 64. The fanzine is photocopied, and is 30 pages of slap-dash thrown together mayhem that might now be defined as "old", "vintage" or even "antique". [1]